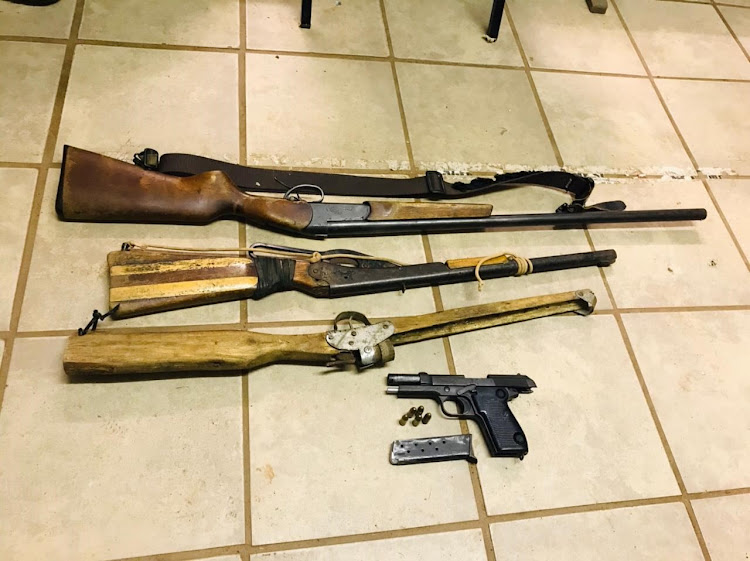 A 39-year-old woman was found in possession of a pistol, two homemade shotguns and five rounds of ammunition during a police raid at Nsuze in northern KZN on Thursday night.
Image: SAPS

Two people were arrested in northern KwaZulu-Natal after police made two major busts on Thursday, confiscating an array of firearms including an AK47, homemade shotguns and drugs.

This formed part of a joint intelligence driven operation by various specialised policing units who conducted searches at three premises in Appelsbosch and Nsuze in northern KwaZulu-Natal.

“Upon searching the house, police recovered a pistol, shotgun and an AK47 firearm. A total of 154 various rounds of ammunition were seized by police. Various drugs such as Mandrax, cocaine and heroin to the value of R4,000 were seized inside the house. 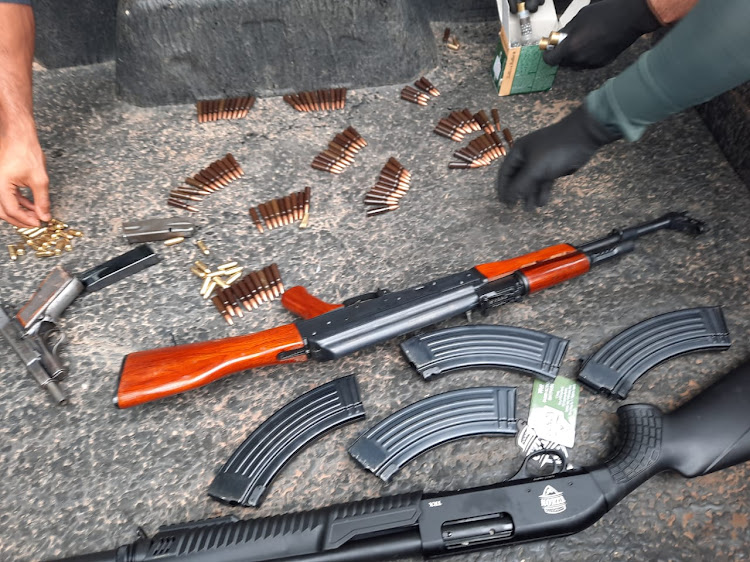 A 37-year-old man was arrested at a farm in northern KZN in possession of a pistol, a shotgun and an AK47.
Image: SAPS

“During the operation a bakkie was found at the premises.”

Gwala said it was discovered that the vehicle’s engine was tampered with as it did not match the registration.

“The vehicle had no logbook or licence disk. It was then impounded and taken to the police pound for further investigation.

“The 37-year-old suspect was placed under arrest for possession of illegal firearms, ammunition and drugs. He is expected to appear in the New Hanover magistrate's court on Friday.”

In the second incident, iLembe crime intelligence, assisted by officers from the Durban public order police unit, were in the Mqwayibeni and Waterfall areas under the Nsuze policing precinct on Thursday night.

“Their operation yielded positive results when they recovered four illegal firearms. The team went to a homestead where a 39-year-old woman was found in possession of a pistol, two homemade shotgun rifles and five rounds of ammunition,” said Gwala.

“The suspect was placed under arrest for illegal possession of firearms.”

Members went to a second homestead and the occupants disappeared into the bushes.

“A search was conducted and a shotgun was found inside the house. All the seized firearms will be subjected to ballistic testing to ascertain if they were used in the commission of any crime.

“The arrested suspect is appearing before the Maphumulo magistrate's court on Friday.”

PODCAST | Justice for Kopano: How many witnesses does it take?

A 23-year-old man has been arrested in connection with the callous execution-style killings of five people from KwaNdengezi, west of Durban, in ...
News
11 months ago

One man was arrested and several high-calibre firearms were seized after a shoot-out on Friday between police and an armed gang near Alexandra, north ...
News
11 months ago

Ex-policeman and SAPS clerk among 4 suspects arrested with firearms, ammo

A stop and search operation on Wednesday evening led to the discovery of six unlicensed firearms, large quantities of ammunition, police uniform ...
News
11 months ago

A team of investigators has been assembled to probe the discovery of an arms cache recovered by police from the Raubenheimer Dam, outside Oudtshoorn, ...
News
1 year ago