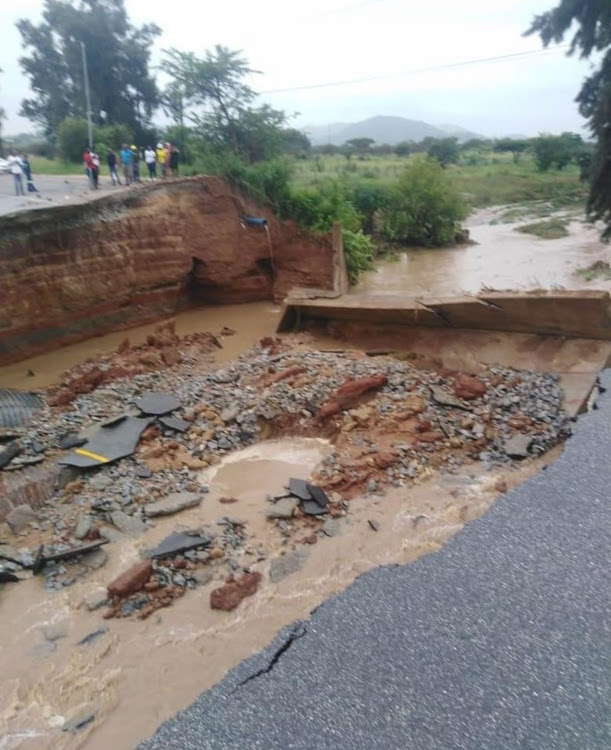 Five people are missing and eight others have died in floods ravaging Mpumalanga.

The provincial department of co-operative governance and traditional affairs has cautioned communities in flood-line areas to move to safer areas.

“We are expecting a rising level of water due to the predicted rain over the weekend, and this is a serious threat with a greater possibility of human tragedies,” said Cogta MEC Mandla Msibi.

He said vacating the dangerous areas would reduce the impact of the heavy rain, which has already left a trail of devastation, affecting many families in Mpumalanga.

The department said communities in the proximity of rivers, dams and water streams are at risk of drowning should the current levels of water rise.

Msibi said most rivers and dams are above 90% full, and communities in those areas remain at high risk of being washed away.

Two house have collapsed this morning, near Sipho Maculuve's house. Maculuve drowned on Sunday and after his house collapsed on Sunday. He still missing #SABCNews pic.twitter.com/04Hmes2AV9

He also warned people not to cross rivers and dams, saying doing so was a tragedy waiting to happen.

“The number of people who cross our rivers and dams is a serious cause for concern. We also observe with concern motorists who put the lives of people [in danger]by crossing bridges submerged under the water. We implore communities not to tolerate such delinquencies to prevent tragedies,” he said.

The MEC said his department intervened in various cases to support distressed families and rehabilitate damaged infrastructure. However, he said loss of lives could only be avoided if communities took precautionary measures.

“Working together with municipalities, sector departments and humanitarian organisations, we have provided distressed families with relief material such as tarpaulins, sponges, blankets and food. We will continue to do so as part of disaster management and to cushion them against the impact of the heavy rain. An assessment is being made on the damaged infrastructure to determine the costs of rehabilitation. However, we cannot replace the human loss, hence the need for vulnerable communities to vacate dangerous areas,” he said.

On Friday, the intergovernmental committee on disaster management met and directed that damage assessments be expedited to advise the national cabinet on the way forward.

Msibi said he will be convening an urgent meeting on Monday, with all executive mayors, speakers and chief whips of all municipalities to discuss these aspects including relief and the safety of communities at large.

The North West education department on Thursday said the floods in parts of the province have prevented some teachers from reporting for duty.
News
1 year ago

Transport minister Fikile Mbalula has called on all road users to exercise extreme caution on the roads as persistent rains continue to lash parts of ...
News
1 year ago

As the red, blood-like waters which submerged the town of Deben in the Northern Cape began subsiding, one resident has found in it a message from the ...
News
1 year ago