Durban refinery hangs in the balance as repairs to cost R800m 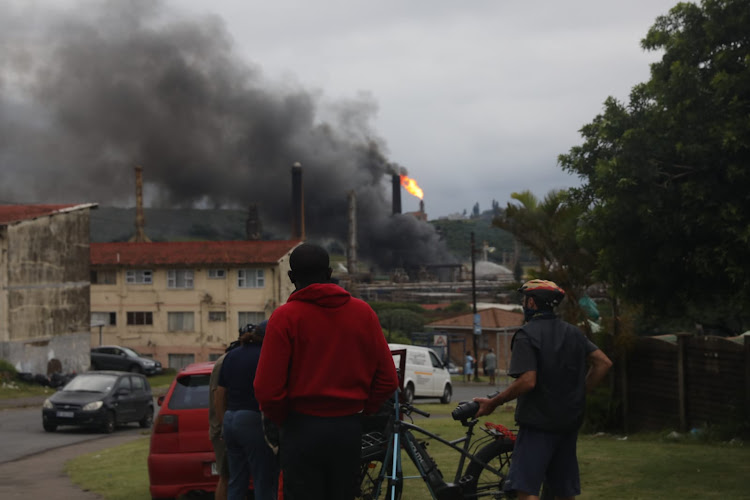 'The ground started vibrating under my feet,' said a refinery employee who was on site when the explosion occurred at Engen's refinery in Wentworth on December 4. File photo.
Image: Sandile Ndlovu

The estimated cost to repair the Durban Engen refinery after an explosion and subsequent fire which gutted parts of the plant in December is R800m.

This was revealed by the national portfolio committee on environment, forestry and fisheries during an oversight visit to assess the damage to the refinery in Wentworth, south of Durban, on Friday.

“The general estimation of the cost for repairs is about R800m. Now that is a lot of money, and repairing the damage is going to take quite some time. Obviously the company will not be able to operate without repairs to that damage,” chairperson Fikile Devilliers Xasa said.

Xasa raised concerns over an “insufficient report” into an investigation about what had caused the fire.

A massive fire is raging at the Engen refinery in Tara Road, south of Durban, after an explosion at about 7am on Friday.
News
1 year ago

According to Engen, the preliminary investigation indicated that the incident was “caused by the failure of vendor-supplied equipment”.

This is detailed in a brief document, which TimesLIVE is in possession of, that was presented to the portfolio committee by Engen.

In it, Engen highlighted that it had received 201 complaints from the surrounding communities — the majority of which relate to structural damage. 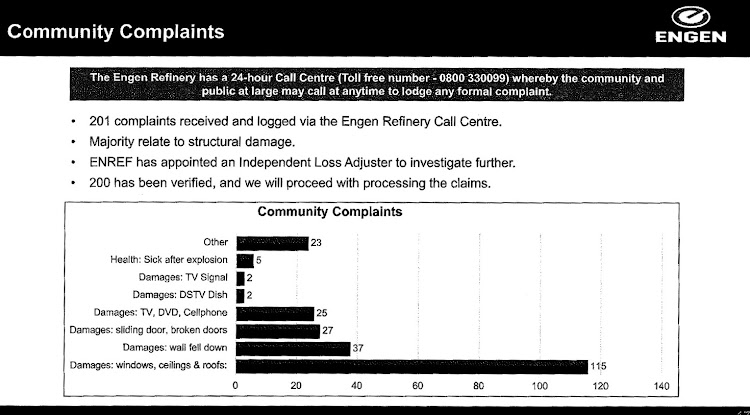 A document presented to the parliamentary portfolio committee by Engen details the number of complaints stemming from an explosion at its oil refinery in Durban on December 4
Image: Supplied

Xasa said the report presented by Engen was inconclusive.

“Even that report was inconclusive because after meeting with Engen, we were supposed to meet the Durban South communities. But it became difficult for Engen and the communities to sit in one meeting, which would have taken place at a nearby school.”

Desmond D'Sa of the South Durban Community Environmental Alliance (SDCEA) — who has for decades fought against the refinery in the area, highlighting the health of the surrounding communities affected by pollution from the refinery — said Engen's directors would need to make a decision about what they wanted to do.

“We are aware that Engen's board must make a decision. They've been saying they want to shut down in two years, so we're quite happy to engage in those plans to shut it down.”

Wentworth and Merebank residents want the Engen refinery to compensate families who 'lost everything' in last week's explosion at the plant south of ...
News
1 year ago

D'Sa said he formed part of the delegation taken on a tour of the plant which had been ravaged by the fire.

“The entire plant is shut. It is rotten — completely burnt. There is no way you can repair it, you will have to build a new plant.”

He was adamant that someone would needed to be held to account after the finalisation of the investigation.

Meanwhile, the portfolio committee has tasked the provincial committee on environmental affairs as well as the eThekwini municipality to facilitate meetings between Engen and the community before a recommendation can be given.

“The meeting between the company, the community and local government should not wait any longer. We expect immediate engagement at local level in terms of resolving the issues of damages and relief, if there are any,” said Xasa.

Energy company Engen received a grilling from MPs and members of civil society when its management appeared in parliament on Tuesday following an ...
Politics
1 year ago

It was a black Friday for residents south of Durban after an explosion and massive fire at the Engen refinery caused plumes of thick smoke to hang ...
News
1 year ago