‘Tragic and sad day’: farmer on death of seven children in river 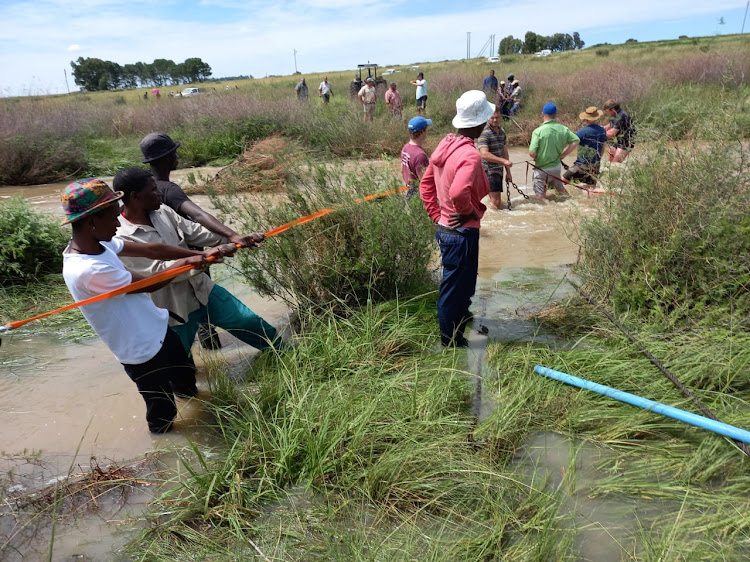 Ropes were tied together to try and reach the car, but the current was too strong.
Image: Kobus Joubert

The driver of a car swept away by floodwaters managed to escape to safety but went back into the river to try and rescue the seven children who were with him.

A farmworker ran to call for help in Steynsrus on Sunday morning, but it was too late.

By the time farmer Kobus Joubert, his father Frits and nephew Henko Delport arrived at the scene, there was only an eerie silence.

The seven children and the driver had drowned.

“When we arrived ... we didn’t even see the car. If I had to walk past there and didn’t know there was a car in the water, I would have never known that people have died,” Joubert told TimesLIVE on Monday.

Joubert was alerted to the incident just after 9am when a worker sought help at their farm at Somerset East in Steynsrus.

“The farmworker came rushing to us and asked if they could use the tractor because one of their family members drove the car into [the river] so the water swept the car away.

“We initially thought that the car wasn’t really swept away and they just wanted to pull it out,” he said.

Makhele said the two men and driver managed to get out of the vehicle.

“The driver went back into the water to try to save the children from drowning but was also swept away by water,” Makhele said.

Joubert said they were met by a group of anxious people gathered around the water.

“When we arrived and didn’t see the car, one of the workers said the car was about 50m from where it was first swept away.” 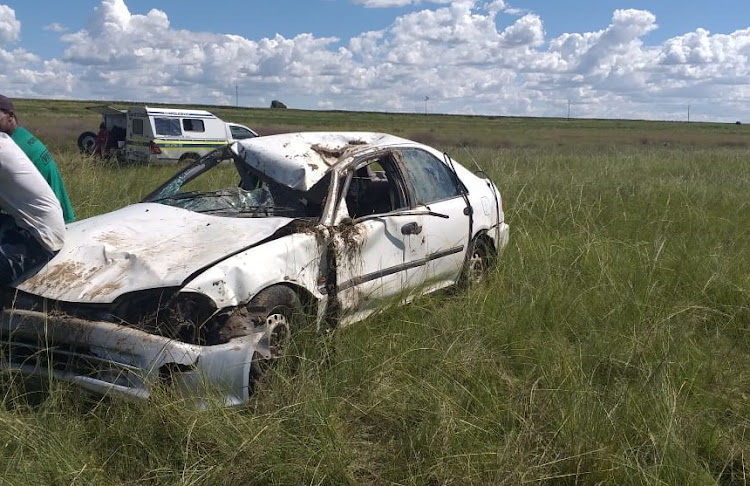 Eight of the 10 people traveling in the white Honda Ballade died when the car was washed away.
Image: Kobus Joubert

Joubert said ropes were tied together and people tried to reach the car but the current was too strong.

“One of our own people on the farm went into the water with ropes, but as soon as he got onto the roof of the car, the water swept him away.”

By then more farmers and farmworkers had arrived to help.

After several failed attempts a cable was drawn across the water and secured to two tractors.

Joubert said a brave 24-year-old Harold Hills risked his life going into the water to secure a chain to the vehicle.

“He was trying to tie a chain to the car to pull it out when he found one of the bodies.”

After an hour and a half the car was finally pulled from the water. “When we pulled the car out, there were four bodies inside – two girls and two boys. After a further long search we couldn’t find anything,” said Joubert.

Police divers from Welkom then arrived to retrieve bodies.

“They were searching the whole day [Sunday], and at around 4pm they found the driver and two more children.”

The body of Karabo Kok, 7, was recovered on Monday.

An inquest docket was opened.

“We thank our diving team for working so hard to make sure this last body is recovered.

“I want to thank this team of divers for their dedication even under tireless, difficult and dangerous circumstances,” said provincial police commissioner Lt-Gen Baile Motswenyane.

One adult, seven children drown after car plunges into river in Free State

One man and seven children drowned after in which they were travelling plunged into a river at a farm in Steynrus in Free State at the weekend, ...
News
9 months ago

The National Sea Rescue Institute has warned South Africans to exercise caution when swimming at beaches following deaths and near-drownings at the ...
News
9 months ago

The NSRI has commended four girls for their efforts in saving a teenage girl who was swept away by rip currents at Checkers beach in Jeffreys Bay in ...
News
9 months ago