German couple save life of second bather at Wilderness Beach 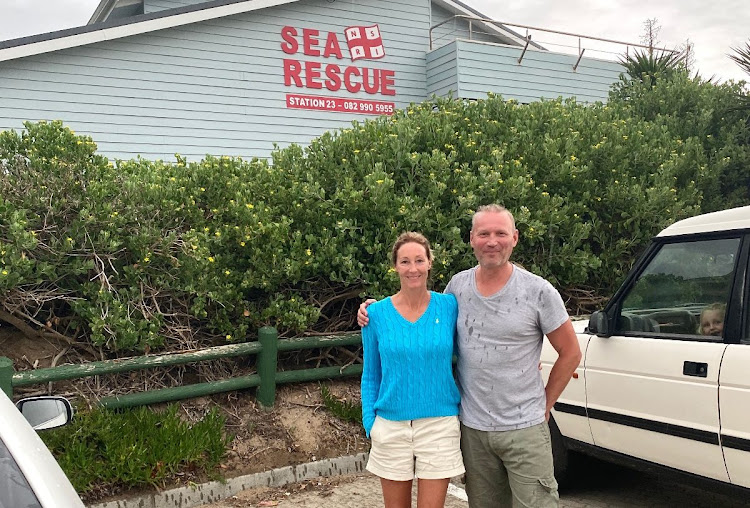 Bjoern and Julie von Bismarck were commended for their swift reaction that saved a man from drowning in the surf in the southern Cape.
Image: NSRI

Bjoern von Bismarck grabbed his bodyboard and dived into the surf without hesitating when he saw a man being swept out to sea at Wilderness Beach in the southern Cape.

It was late on Thursday afternoon and the bather was caught in a strong rip-current. It was also the second time, at the same place, in the space of a year that the 49-year-old former German police officer would save a man from drowning.

NSRI Wilderness deputy station commander Johan Scholtz said rescuers were responding to reports of a drowning when they received a call from a German lady saying her husband had entered the surf to help a man swept out to sea.

“Bjoern helped the casualty onto his body board and then started swimming him towards the shore but from sheer exhaustion the casualty was unable to hold onto the board and he kept slipping off the board,” said Scholtz.

“Bjoern had to keep hauling him back onto the body board. After some time swimming through the heavy surf conditions they reached the shore and safety.”

NSRI and the emergency services found the distressed bather on the beach after he had been rescued. “The casualty was assessed by paramedics and he was treated for exhaustion and for non fatal drowning symptoms, but he was otherwise not injured and following some medical treatment, he was released requiring no further assistance,” Scholtz said

The couple, from Lubeck, Germany, who have a house in Wilderness, said they needed to react quickly to save the man from drowning.

Von Bismarck, who in his younger years belonged to a special tactical unit of the German federal police (Bundespolizei), saved a SA man from drowning at the same place in February 2020. And in March 2020, he helped local surfers rescue an Australian citizen at the same beach.

The couple were commended for their swift reaction that saved the man from drowning on Thursday.

“I heard the granny screaming in the bushy area, already inside the river asking for help.”
News
1 year ago

‘Tragic and sad day’: farmer on death of seven children in river

Stillness hung over a Free State river after it swallowed a vehicle carrying 10 people, leaving eight dead.
News
1 year ago

The National Sea Rescue Institute has warned South Africans to exercise caution when swimming at beaches following deaths and near-drownings at the ...
News
1 year ago