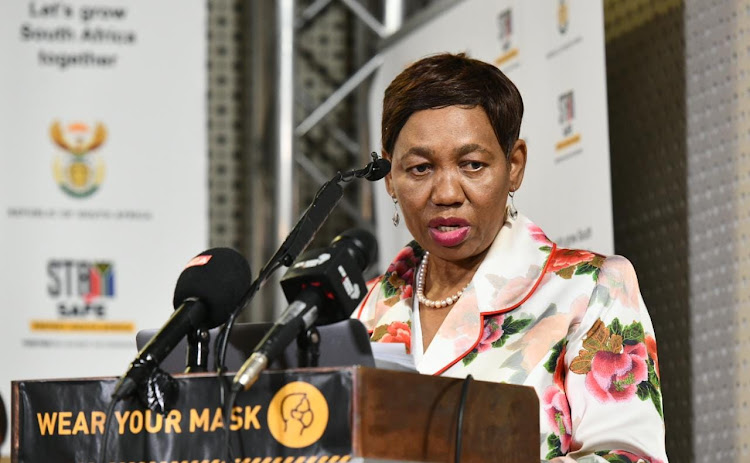 Basic education minister Angie Motshekga during a media briefing on Sunday, ahead of the reopening of schools on Monday.
Image: GCIS

After a Covid-enforced delayed start to the 2021 year, it's all systems go when schools reopen on Monday.

But more than 16,000 grade 1 and 8 pupils will not be able to go school when the gates are opened, as the basic education department grapples to find places for them.

Basic education minister Angie Motshekga said that while almost all schools were ready, and that provinces had made good progress in placements of pupils, there were “still 16,117 learners awaiting spaces in schools”.

“The demand for space in schools, especially in grades 1 and 8, remains a challenge for the [education] sector. All provinces are experiencing a high demand in particular areas,” she said at a media briefing on Sunday.

Motshekga even joked that, because her cellphone number was published online, she had received calls from parents worried about the situation. Some parents contacted her before 5am, hoping to catch her before she started her day.

“The Council of Education Ministers (CEM) met yesterday [Saturday], and the matter of school admission was identified as critical because the system cannot afford to see any learners being left behind. It was agreed that provinces would work with speed to place all the learners in the next week,” she said.

Parents who wonder if they can skip paying school fees in the context of Covid-enforced longer school breaks have been categorically given the ...
Politics
1 year ago

Motshekga added that 67 schools across SA had also not reopened yet, mostly due to severe storms and flood damage.

Basic education director-general Mathanzima Mweli said while the department was still finalising the logistics to get stationery and textbooks delivered to schools, many of the books had now been delivered. To support home learning, some schools were still short of textbooks.

He said that to accommodate home learning during the Covid-19 pandemic the department would be rolling out broadcasting solutions to support pupils while at home.

Mweli said the department is paying attention to sanitisation at schools, and is working with provinces to ensure water provision.

“The information that we have is that there should be no school without water,” he said, adding that in instances where this wasn't the case, water tanks would be used or the department would work with municipalities to increase water pressure.

Mweli also admitted that at least 1,724 schools were vandalised during the school holiday.

The lengthy closure of schools had not only negatively impacted pupils  academically, but it had also profoundly affected their mental health.

Provincial education departments are scrambling to find places for thousands of pupils as state schools reopen on Monday for the first term of the ...
News
1 year ago

Mweli said many of the pupils had no access to therapy services.

“Many of them don't get access to services, and that slows their development in their wellbeing. And we are happy that they are coming back and will be able to get all the services back. And as I've said, we are meeting regularly with the association of school governing bodies, professional bodies, which include professional bodies that represent schools for learners with special education needs, psychosocial services. It's a major area for us.”

“The demand [for counselling] has been huge for teachers, and the demand is going to be even higher for learners as learners return, having been traumatised by the fact that they would have lost a loved one, would also have been infected and so on, and would have lost a teacher. So we are working with NGOs. We've also brought in online services that will come in handy to provide for this. We also working with faith-based organisations because they are very good in this area.

“So we we're going to keep monitoring this and make sure that the necessary support is provided,” he said.

Motshekga, who is also recovering from Covid-19, said the impact of the virus continues to be felt in the education sector with at least 1,169 teachers having succumbed to the virus. This year alone, at least 159 teachers had died due to Covid-19.

2020 matric exams were 'not compromised' despite papers being leaked

While the true extent of the 2020 matric examination leaks might never be known, officials investigating these irregularities are emphatic that the ...
News
1 year ago

President Cyril Ramaphosa said it was a priority that the education sector regains the time it lost to the coronavirus pandemic.
Politics
1 year ago

Gauteng education MEC Panyaza Lesufi says his department is ready to commence with the 2021 academic year as more than 1.5 million pupils prepare to ...
News
1 year ago