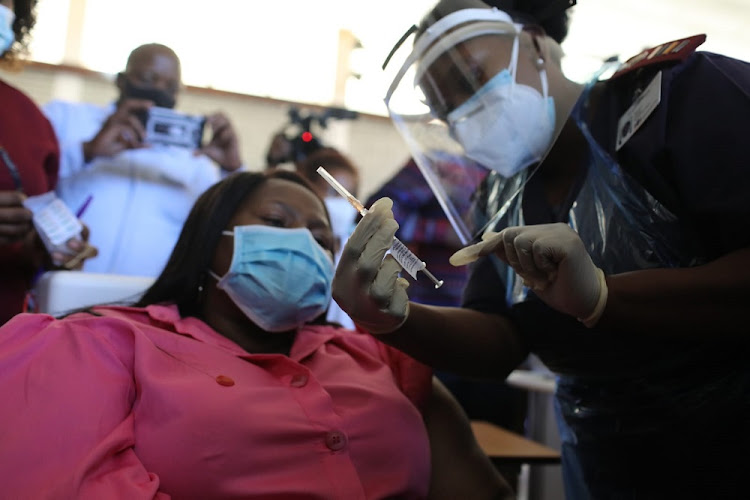 Black South Africans who don't have matric are seemingly more willing to take the Covid-19 vaccine than white and better-educated people.

That is according to a University of Johannesburg study, whose findings were made public on Wednesday — coinciding with the first administration of the Johnson & Johnson vaccines which were given to some of the country’s health-care workers and high-ranking government officials including President Cyril Ramaphosa.

Labour ward sister Zoliswa Gidi-Dyosi became the first health worker in SA to be vaccinated against Covid-19 on Wednesday.
News
1 year ago

The research was presented under the headline “Who wants the vaccine, who doesn’t, and why? Findings and analysis from the UJ/HSRC Covid Democracy”.

It found that the majority of the people it surveyed — just above 52% of the 11,000 respondents — would definitely take the vaccine, while 14% said they probably would do so.

“So that gives about 67% of the population that would either definitely or probably take the vaccine,” said sociology professor Kate Alexander. People who did not have matric were more accepting and willing to take the coronavirus vaccine compared to those who had more education.

“Among people who did not have a matric, 72% were willing to take the vaccine when looking at the acceptance rate. The acceptance rate goes down when people gained more qualifications,” said Alexander. “For people who have completed matric but have not gone to university, the figure was at 62%,” she added.

And 59% of those who had a tertiary qualification or part of one were willing to take the vaccine.

“This was of some interest, particularly to journalists. It seemed bizarre to them that the less-educated people would be more willing to take the vaccine, but that’s what we found and it will be something that is interesting to think about,”  Alexander said.

“We know that because of our history, black Africans don’t have the same level of resources to get the kind of education available to large numbers of white people, so there is a correlation between levels of qualification and race.

“So these two things are matching: black Africans are more likely to be willing to accept a vaccine than white people,” Alexander said.

The UJ research was conducted between December 29 and January 6, when SA was at the height of the second wave of the virus and was seeing a peak of a number of infections and fatalities.

The questionnaire was available in English, Afrikaans, Zulu, Xhosa and Setswana.

Researchers said the sample was weighted using Stats SA’s 2016 community survey data for race, age and education to ensure it was broadly representative of adults in SA.

“Weighting equalised the voices of the participants,” researchers said. “In terms of people who responded, there were more younger people — 20- and 30-year-olds — than there were older people,” said Alexander.

Many of those who participated in the survey were also from Gauteng, therefore if a Gauteng person completed the survey, their voice was reduced to scale.

Alexander, however, said this was not a random survey and therefore they could not claim the results were fully representative and gave a precise confidence interval. But, Alexander said, people were most likely to be more honest and answer more questions online than on questionnaires.

While some may say the survey was biased based on the fact that many people did not have access to smartphones, Alexander pointed out that almost 25% of the participants had an income of less than R1,000 a month while just over 26% had an income of between R1,000 and R2,500 — highlighting that the survey did not exclude those living beneath the poverty line.

Alexander said they did have difficulty in getting surveys completed by those above the age of 65 but said they made up a small proportion of the population and therefore their absence in participation was not a glaring factor.