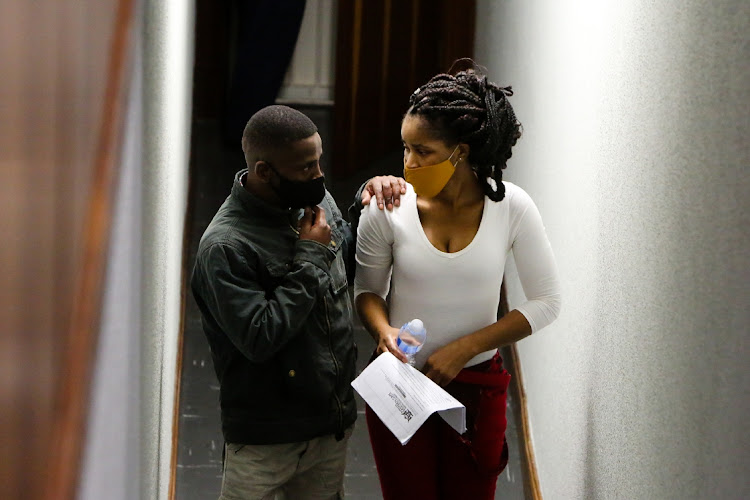 Nosicelo Kamba, 32, and her co-accused Lunga Mbondo, 34, have been sentenced in the Port Elizabeth high court to life behind bars.
Image: WERNER HILLS

A police constable, employed to uphold the law, was instead planning and executing the murder of her lover, a fellow police officer.

And that is why a sentence of life behind bars was fitting, the Port Elizabeth high court ruled on Wednesday.

Acting judge Hannelie Bakker described the 2016 murder of Vuyo Matshishi, 36, as an act of “extreme cowardice” in which Matshishi had no means to protect himself.

His family expressed joy as 32-year-old Nosicelo Kamba, his girlfriend at the time, was sentenced to life behind bars.

Matshishi’s father and cousins were at court on Wednesday and said they were relieved that the sentence would bring the family a sense of closure.

His cousin, Zonele Ndesi, described the former policeman as a kind, law-abiding citizen.

“We are very happy with the sentence, it has brought us closure after many years of pain. Though the sentence will not bring Vuyo back, we are relieved this chapter is closed.”

PODCAST | Justice for Kopano: it’s been over two years and still case is unsolved

Kamba and her co-accused Lunga Mbondo, 34, were found guilty in November of Matshishi’s brutal murder.

His badly burnt body was found near his burnt-out car on the side of a road near Peddie.

After his arrest in August 2017, Mbondo made a full confession to a Port Alfred magistrate about the murders and said Kamba had threatened to kill him if he told anyone about the killings.

“Melikhaya was first knocked unconscious, placed in the boot of the car before he was strangled to death, and Vuyo was asleep.

“Our courts have similarly even taken a harsher stance in a sentencing of a person, like [Kamba], who did not want to get her hands dirty, but got [Mbondo] to do [the killing],” Bakker said.

On charges of defeating the ends of justice, Mbondo was sentenced to four years behind bars. The sentences will run concurrently.

“An aggravating factor which the court has taken into consideration is that the family and loved ones of Melikhaya suffered a lot of pain at his sudden and complete disappearance.

“They knew not what had become of him until the investigation into the death of Vuyo managed to trace his remains and give them closure after a long period of uncertainty,” Bakker said.

Both were also accused of the April 2016 murder of Nqono, while Kamba was further charged with the attempted murder of Ndileka Booi.

At the beginning of their trial, Mbondo pleaded guilty to all the charges against him, while Kamba pleaded not guilty.

She was eventually acquitted of Nqono’s murder, but convicted of attempting to murder Booi, 31, who she accused of having an affair with Matshishi.

It was found that on April 13 2016, Kamba had assaulted Booi by hitting her over the head with a blunt object, stamping on her head and back, and kicking her in the ribs.

Booi was taken to Livingstone Hospital by Kamba and stayed there for three days.

Two weeks later, Nqono, an alleged witness to Booi’s assault, was abducted, assaulted and strangled before his body was dumped and burnt along the road between Peddie and Makhanda.

Just over a year later, in July 2017, according to Mbondo, Kamba asked him to help kill Matshishi after the two had been embroiled in a heated argument.

Matshishi and Kamba were both police constables stationed at Gelvandale police station at the time.

Kamba was sentenced to two years’ imprisonment for defeating the ends of justice.

She was further sentenced to five years in jail for the attempted murder of Booi, three of which were suspended for five years on condition she was not convicted of a similar offence.

An application for leave to appeal against Kamba’s convictions was dismissed by Bakker, who said she did not foresee another court coming to a different conclusion.

One day after police arrested a "wanted hitman" for a spate of murders at the notorious Glebelands hostel in Umlazi on Friday, three teenagers were ...
News
11 months ago

Four alleged underworld characters and a police officer appeared in the Cape Town magistrate’s court on Tuesday after they handed themselves over to ...
News
11 months ago

A 22-year-old woman is expected to appear before the Smithfield magistrate's court on Tuesday after the lifeless body of a 29-year-old farmworker was ...
News
11 months ago