Politics plays pivotal role in how the public buys into the Covid-19 vaccine, survey shows

The majority of the almost 11,000 citizens who were surveyed and showed willingness to take the vaccine were ANC supporters. 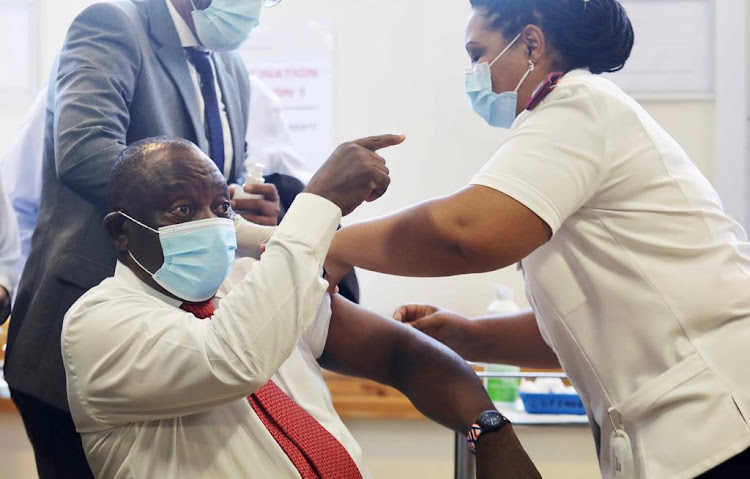 President Cyril Ramaphosa receives his Covid-19 vaccination at the Khayelitsha District Hospital in Cape Town on Wednesday. A new survey, released on the same day, has found that politics and politicians have a big roll to play in how the public perceives the coronavirus vaccine.
Image: ESA ALEXANDER/SUNDAY TIMES

There is a strong relationship between politics and willingness to accept the Covid-19 vaccine.

This is the evidence presented in a study released on Wednesday.

The study — by the University of Johannesburg’s sociology department and the Human Sciences Research Council titled “Who wants the vaccine, who doesn’t and why” — revealed that people who were not willing to participate in elections and vote, and who did not support any political party, had a very low level of acceptance of the Covid-19 vaccine and would most likely not take it.

Black South Africans who don't have matric are seemingly more willing to take the Covid-19 vaccine than white and better-educated people.
News
11 months ago

The majority of the almost 11,000 citizens who were surveyed and showed willingness to take the vaccine were ANC supporters.

When it came to the opposition parties, the survey revealed that where the party leaders have advocated or supported the vaccine, its members seemed more receptive of it.

“Nearly 80% of ANC voters [who took part in the survey] either would or probably would take the vaccine. These figures mirror the views of how well the president has done in the handling of the Covid-19 pandemic,” said sociology professor Kate Alexander.

“Those who have done a good job are much more likely to accept the vaccine than those who think he has done a bad job,” Alexander added. “It does seem very clear that people who identify with the president in particular, are more willing to take the vaccine so leadership matters and it has had an impact on whether people think [the vaccine] is something or something bad.”

Labour ward sister Zoliswa Gidi-Dyosi became the first health worker in SA to be vaccinated against Covid-19 on Wednesday.
News
11 months ago

Meanwhile, Ngqapheli Mchunu, a senior researcher in the study, said they found that the majority of those who expressed that they would not take the vaccine said it was because they feared possible side-effects.

Many also questioned its overall effectiveness, while others simply expressed a distrust in the vaccine.

Mchunu went through a list of reasons given by respondents who said they would not take the vaccine.

Others believed they were not prone to catching the flu and therefore felt they could escape catching the virus. Others said they continued to live like they were on level five lockdown and left their homes only for necessities while they still observed all preventive methods.

COVID-19 WRAP | Covid-19: What leaders say during a pandemic matters

Several cited their fears of the vaccine being linked to the occult while others maintained that the virus was a myth.

“Communication around vaccine manufacturing is critical to ensure that ordinary South Africans are informed about how vaccines are made and the science that goes into making a vaccine,” Mchunu said.

The UJ research was conducted between December 29 and January 6 when SA was at the height of the second wave of the virus and was seeing a peak in the number of infections and fatalities.

The questionnaire was available in English, Afrikaans, Zulu and Xhosa and Setswana.

Researchers said the sample was weighted using Stats SA’s 2016 community survey data for race, age and education to ensure it was broadly representative of the adults in SA.

“Weighting equalised the voices of the participants,” researchers said.

SA's first vaccination on Wednesday happened on day 342 of SA's Covid-19 outbreak. The first confirmed case was recorded on March 5. It also came with the second wave in rapid decline. The number of active cases countrywide dipped below 50,000 on Tuesday for the first time since December 8. Active cases peaked at 239,799 `on January 11 but are now 48,855. A rolling average shows them declining at 47% in the last 14 days.

The country's Covid-19 vaccine rollout is set to begin this week with the first batch of 80,000 Johnson & Johnson vaccines.
Politics
11 months ago