The three employees were found dead hours after the explosion 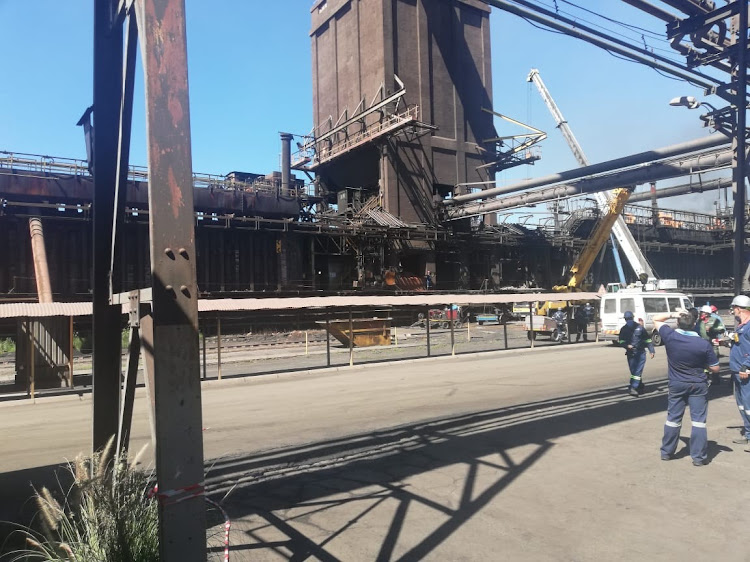 Three workers were buried under rubble after an incident at ArcelorMittal's plant in Vanderbijlpark.
Image: SUPPLIED: NUMSA

“When we retrieved the first body, I had hope that my two colleagues were still alive.”

These were the thoughts of an ArcelorMittal employee as piles of rubble were cleared, some of it with bare hands, after the collapse of a 90-metre stack at the steel producer's plant in Vanderbijlpark on Tuesday.

“Hours later, when we retrieved the second body in a worse state than the first one I lost energy and hope,” the employee told TimesLIVE.

Three workers were fatally injured after being buried under a massive pile of rubble.

The National Union of Metalworkers of SA (Numsa) named the deceased in a statement as Thami Molefe, Shart Mofokeng and Mpho Madomesa.

TimesLIVE has not been able to contact their families.

Speaking outside their union office in Vanderbijlpark, two employees from the plant recalled using their bare hands to remove debris during the search.

“I had just arrived for my morning shift about 8am when I was greeted by barricades. I was informed that there was an explosion and three employees were trapped underneath,” he said.

“I found two mobile cranes on site, one was used as a man cage while another was used to rig out any heavy material in the damaged rooms.”

When the first body was retrieved, “he had a gash on the head ... it is clear he got hit by falling steel rubble ... I had hoped that we [were] going to find them alive,” said the other employee.

“When the body was removed by the police forensic unit, we started digging through the rubble again ... We found the second body ... he was bad compared to the first,” they explained.

Workers who died in ‘explosion’ at ArcelorMittal named

The three workers who were trapped after an explosion at ArcelorMittal’s premises in Vanderbijlpark, Gauteng, on Wednesday have been confirmed dead.
News
1 year ago

“We work with these people and we develop a bond so when one dies in this fashion, you think about their family.”

“I cried because they were my friends. I fell apart,” said a third person who worked with the trio.

She too had hoped they would be found alive.

She last saw them during a shift change at 10pm and expected to see them again in the morning.

Three workers missing after ‘explosion’ at ArcelorMittal in Gauteng

Three people are missing following an explosion at ArcelorMittal’s premises in Vanderbijlpark on Wednesday.
News
1 year ago

She was afraid to return to work after the incident. “I am so scared, I don’t want to lie. I am scared because that building is old, so if it collapsed chances are that the other ones can collapse too.

““We are afraid of being retrenched if we speak up. We are just hoping that the unions and the labour department will intervene,” she said. 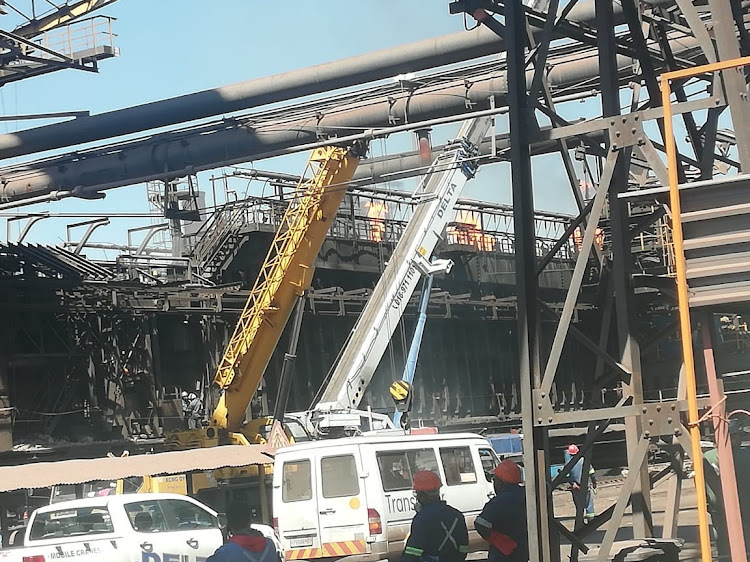 The three workers who were trapped in the rubble after an explosion at ArcelorMittal's plant in Vanderbijlpark were found dead hours after the explosion.
Image: SUPPLIED: NUMSA

Ramokhathali said: “Had it not been for workers volunteering to remove the fallen rock, we would probably still be searching for them even now. There is no specialised rescue team, and this is a requirement for a company the size of AMSA which employs over 2,500 employees, excluding contractors.”

The union is concerned that the remaining buildings are structurally not sound and accused ArcelorMittal management of negligence. They have called for consequences.

ArcelorMittal said in a statement that “a portion of a 90m stack at one of the operation’s coke batteries failed and fell onto the coke battery control room in which the three employees were working.

“On behalf of the ArcelorMittal SA board, management and employees, our heartfelt condolences and deepest sympathies go to the families and colleagues of the deceased,” said Kobus Verster, CEO of ArcelorMittal SA.

“We are extremely grateful to our own qualified emergency personnel, who arrived on site immediately after the incident occurred and worked through the day and night to complete the recovery operation with the support of local emergency services,” said Verster.

Verster said the company had launched an investigation into the cause of the incident.

“The safety of our employees and contractors remains our primary concern. This is an absolute tragedy, and we will do a full and thorough investigation to understand what happened so that we can avoid anything like this from happening again at ArcelorMittal SA,” added Verster.

Chinese rescuers pulled 11 gold miners to safety on Sunday, 14 days after they were trapped by an underground explosion, state broadcaster CCTV ...
News
1 year ago

Three workers missing after ‘explosion’ at ArcelorMittal in Gauteng

Three people are missing following an explosion at ArcelorMittal’s premises in Vanderbijlpark on Wednesday.
News
1 year ago

“I heard the granny screaming in the bushy area, already inside the river asking for help.”
News
1 year ago