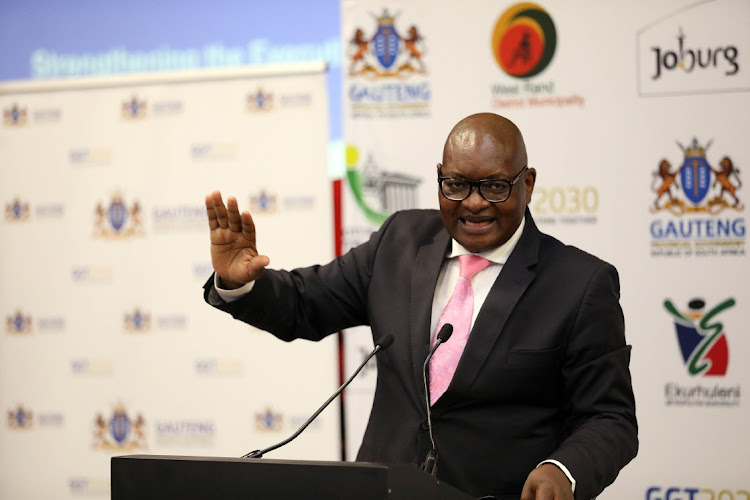 Gauteng premier David Makhura is deeply concerned about the financial state of the economic hub’s municipalities after being hit hard by the Covid-19 pandemic and losing more than R8bn in revenue.

His state of the province address on Tuesday spelt out how negatively revenue collection in municipalities was affected in the first few months of the lockdown which was imposed to curb the spread of the coronavirus and brought the economy to an almost grinding halt.

“The matter of great concern is that the financial position of many municipalities deteriorated during Covid-19,” Makhura said.

Makhura said R8,75bn in revenue was lost between April 2020 and July 2020, which coincided with the first three months of the hard lockdown.

This is critical as the province houses three of SA’s eight metropolitan municipalities, namely Johannesburg, Tshwane and Ekurhuleni. He mentioned the Emfuleni municipality, which is under partial administration, as a major problem.

The premier said the lockdown had a “huge impact on their financial viability”, including on capital expenditure projects municipalities had to embark on which impacted negatively on service delivery.

Municipalities are at the coalface of service delivery in SA, including water and electricity provision, waste removal and ensuring roads and infrastructure are maintained.

While Makhura did digress from his prepared remarks, which were shared with the media, his written remarks indicated there was a decline in spending on capital expenditure projects of 42% and a drop in cash collection due to suspended credit control measures during the current financial year.

He said several municipalities struggled to pay creditors, including Eskom and Rand Water.

Makhura said the provincial government was working with all the municipalities to improve their financial viability. This includes a multidisciplinary team of revenue experts as part of the debt management committee to help struggling municipalities develop an Integrated revenue enhancement and debtors management plan and ensure accurate billing.

“As a result of the work of this committee, R1.62bn was paid by the provincial government to municipalities between April 2020 and the end of December 2020,” he said.

The Gauteng government is eyeing cannabis as one of the biggest contributors to the provincial and national economy.
News
5 months ago

While the financial picture is gloomy, he did say intergovernmental relations between municipalities and the provincial government has significantly improved over the past year, and they were all on board with one plan for the Gauteng city region.

He touched on the politics between the current ANC-led provincial government, especially Johannesburg, which was governed by a DA-led coalition government for three years, saying it was a “frustrating” time. He said collaboration had improved significantly since a new government had been in place. He said it had co-ordinated efforts to unlock investment in the CBD and in the northern and southern parts of Johannesburg.

He said most of those projects were back on track after the “frustrating years” since 2016 when the last local government elections were held.

In the light of the next local government elections later this year, he said the leadership of cities needed to understand they could not stop projects because new leaders were in place.

“A governance system that works like that will completely kill development,” Makhura said.

Gauteng premier David Makhura says the province is looking at tightening the sale of alcohol regulations beyond the current Covid-19 regulations.
News
5 months ago

Human settlements, water and sanitation minister Lindiwe Sisulu is taking over the water infrastructure of the Emfuleni local municipality on the ...
Politics
5 months ago

Gauteng premier says in lekgotla speech that factionalism is threatening to destroy the party.
Politics
5 months ago