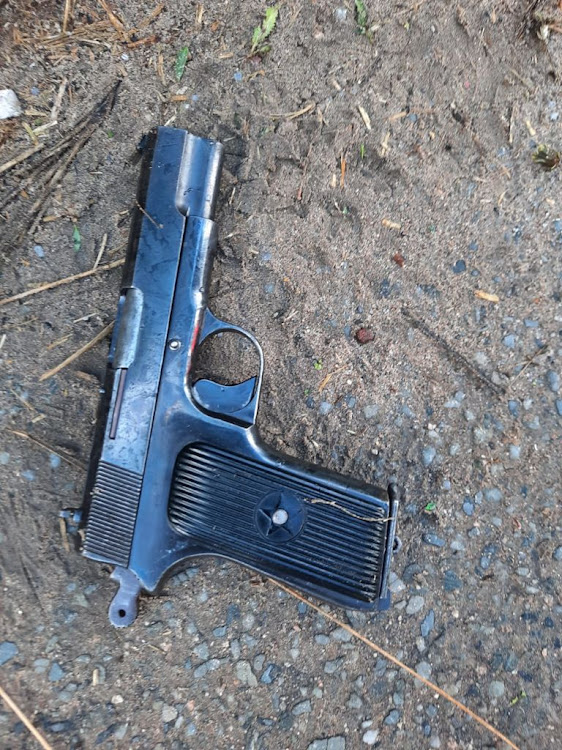 Police seized a pistol from the injured suspect and explosives from the vehicle.
Image: SAPS

A fugitive jewellery store robbery suspect who had been on the run since escaping from custody in 2014 has been arrested after a shoot-out with police in Johannesburg.

Acting on intelligence, police traced the man and spotted him in a vehicle on an M2 off-ramp on Tuesday.

Brig Mathapelo Peters said he was with two passengers in the car — one of them a woman with a baby.

“It is reported that the woman and one of the two men, who was the driver, surrendered to the police. The other man, who was the wanted suspect and was armed, jumped out of the vehicle and allegedly started firing shots at the police while running in the direction of the George Goch hostels. Police returned fire as they gave chase and the suspect was struck and injured,” she said.

Peters said the man was arrested and transported to hospital where he was detained under police guard.

“Police seized a pistol from the injured suspect and explosives from the vehicle. Two more firearms and suspected stolen jewellery were found by police in a follow-up investigation that led to the suspect's place of residence.

“A BMW was seized in Edenvale for further investigation and has at this stage been found to have been used in the commission of a jewellery store robbery in Table View in the Western Cape earlier this month,” she said.

KZN nurses traumatised after being hijacked and robbed by armed men

Two nurses - part of a roving HIV/Aids health team - were left traumatised after they were ambushed and hijacked outside Pietermaritzburg on Friday.
News
1 year ago

Peters said investigations had linked the injured suspect to several jewellery store robberies between 2014 and 2020 at malls and shopping centres in Gauteng, including Clearwater Mall, Cradlestone Mall, Westgate, Eastgate, and Midrand.

“It was during his incarceration for a 2014 robbery that he escaped from custody. The second suspect, the driver of the seized vehicle, has also been taken into custody after the preliminary investigation linked him to some of the robberies.”

Peters said the suspect may be linked to more jewellery store robberies in other provinces.

“The possibility of his involvement in cash-in-transit (CIT) robberies is also being probed. The three firearms will be subjected to ballistics testing to establish links to other serious and violent crimes,” she said.

“Our integrated approach and partnerships with the private sector in dealing decisively with serious and violent crime in the province continues to yield positive results. We must therefore strengthen these relationships in the best interests of the safety and security of the residents of Gauteng and their properties,” said Mawela.

'The suspect was armed with a pistol, which he used to kill six members of the family, aged eight to 70,' said police spokesperson Brig Jay Naicker.
News
1 year ago

A man suspected to be Ekurhuleni’s most prominent serial rapist has allegedly struck again.
News
1 year ago