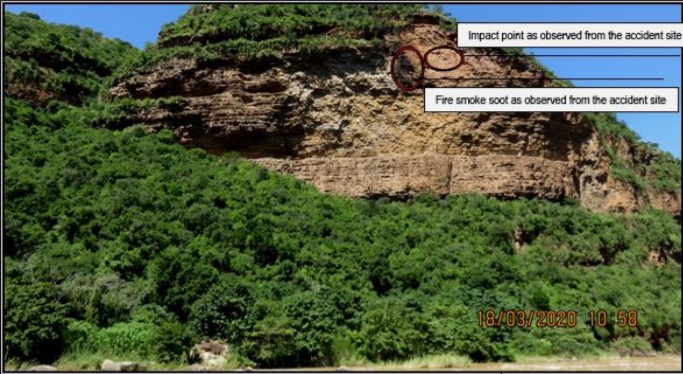 Soot left by an explosion at the place of impact over the Umkomazi River where former Springbok canoeist Mark Perrow died after crashing his light aircraft into the mountain in March last year.
Image: SACAA

An investigation into the possible cause of a KwaZulu-Natal plane crash which claimed the life of pilot Mark Perrow, 55, a former SA Olympian canoeist, in March last year has revealed crucial details leading up to the crash.

An accident report by the SA Civil Aviation Authority (Sacaa) revealed Perrow - who had been monitoring the Nyala Pans to St Elmos race while flying over the Umkomazi River, near Richmond, in his light aircraft - “had probably misjudged his proximity to the cliff” before veering left into it.

"On March 15 2020, a pilot onboard a Sling 4 aircraft with registration ZU-IPS took off on a private flight from Groutville Airfield in Ballito, KwaZulu-Natal, with an intention to land back at the same airfield. The pilot was the owner of the aircraft and a well-known canoeist marathon champion."

The report said shortly after taking off, the aircraft headed towards Richmond, where a canoe marathon was in progress along the Umkomazi River

“The race, which was about 25.8km, had started at approximately 6.30am from Nyala Pans and was destined to end at St Elmos,” it said.

A light aircraft crash in KwaZulu-Natal claimed the life of one person on Sunday.
News
2 years ago

According to eyewitnesses, the aircraft was observed flying at least twice along the Umkomazi River at a height above the mountain peak. They stated that on the third turn to go upstream, the aircraft made a left-side turn, flying low and slow towards the cliff.

“Moments later, a loud bang followed by an explosion was heard, and the aircraft was observed falling. Thereafter, dense black smoke was seen coming from the bushy area at the bottom of the cliff (where the aircraft had come to rest).

“The aircraft was destroyed by impact forces and the post-impact fire that erupted thereafter. The pilot was fatally injured during the accident sequence.”

The pilot who was killed in a plane crash near the Umkomazi River Valley on the KwaZulu-Natal south coast on Sunday has been identified as ...
News
2 years ago

The report found that at the time, the weather was clear with little to no wind and the visibility was good.

It also found that Perrow and his aircraft had met all the necessary licensing and legal requirements for him to fly and that evidence suggested there had been no mechanical faults with his plane prior to flight.

“The aircraft had undergone its initial mandatory maintenance of 25 hours at 26.4 airframe hours since its release from factory on January 3 2020. The records indicated the aircraft was serviceable at the time of the flight. No defects were found in the logbooks that could have contributed to the accident at the time of flight.”

January 2021 has been the worst month for aircraft crashes in SA since 'Black October' in 2008 when 26 people died in eight crashes.
News
1 year ago