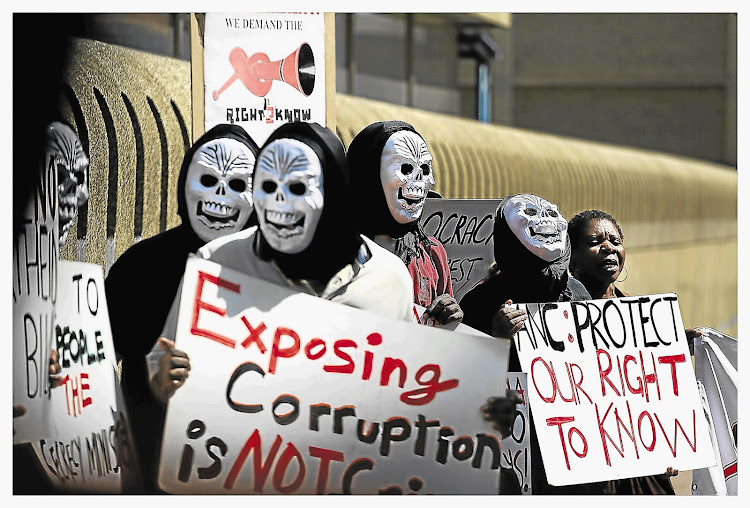 Right2Know will host protest marches in Cape Town, Durban and Gauteng ahead of the 2021 budget speech which will be delivered by finance minister Tito Mboweni on Wednesday. Archive image
Image: Alon Skuy

Campaigners of the Right2Know (R2K) group have announced they will intentionally defy Covid-19 regulations barring political gatherings because they claim there is no merit in this particular rule.

On Tuesday the group said: “We will be defying the current Covid-19 regulations that prohibit political gatherings because we believe the government is using them to suppress dissent.

“Other gatherings are permitted in the current regulations and we believe this is an attack on our right to protest.”

The EFF on Sunday threatened to take the government to court unless the country's "political space" was reopened.
Politics
1 year ago

The group intends to host protest marches in Cape Town, Durban and Gauteng ahead of the 2021 budget speech which will be delivered by finance minister Tito Mboweni.

The group said while government had barred political gatherings, those that happened in favour of the ruling party were seemingly allowed.

“Last week two ANC political gatherings took place outside the Bloemfontein and Western Cape high courts where ANC leaders are facing corruption charges and these happened without any police interference,” the group said.

The much-anticipated address by ANC secretary-general Ace Magashule to hundreds of his supporters in Bloemfontein will no longer take place.
Politics
1 year ago

The protests planned for Wednesday were to demand a pro-poor budget.

“The poor feel left out as the fruits of democracy only benefit a few politically connected individuals. Corruption is rampant and politicians continue to loot with impunity. For too many, democracy does not deliver on its promises. Instead of a better life, the government is serving austerity, unemployment, violence and repression,” R2K said.

“The government is manipulating the Covid-19 pandemic to find reasons to shut down protests and make it even harder for activists to organise and lawfully participate in protests. As citizens, it is our duty and responsibility to defend the right to freedom of assembly,” the group said.

R2K stressed their protests would be peaceful and all participants would wear masks and adhere to social distancing regulations.

As it has done in previous years, the Automobile Association (AA) is again urging the minister of finance, Tito Mboweni, not to increase fuel levies ...
Motoring
1 year ago