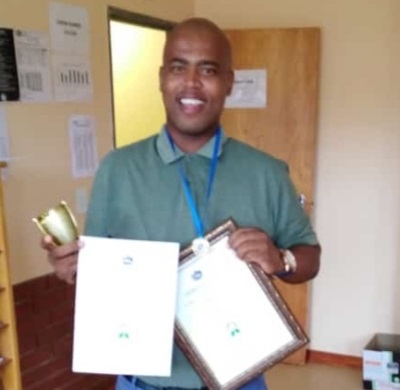 Sizwe Kubheka is a mechanical engineer who has been teaching science at Thokoza High School.
Image: Supplied

His love for teaching and passion for bettering the lives of rural pupils resulted in physical science teacher Sizwe Kubheka working for six months without getting paid.

Now his dedication has been rewarded after six of the pupils in his physical science class of 33 obtained distinctions while no-one failed the subject.

As a result, Kubheka, 35, a qualified mechanical engineer who teaches physical science at Thokoza High School in Bergville, KwaZulu-Natal, has been hailed as a hero by villagers. For the past four years his class achieved a 100% pass rate and he was also honoured as the best teacher in his district.

In June last year, Kubheka's contract was terminated by the KwaZulu-Natal department of education because he did not have teaching qualifications.

“After my contract was terminated I could not just abandon my pupils as they were looking up to me to help them produce good marks. I continued teaching even though I was not paid. It was difficult but I had to make sacrifices for these pupils who had their hopes on me.”

'You've been through hell and back, but did it' — Mzansi toasts the matric class of 2020

Basic education minister Angie Motshekga said on Monday she was pleased with the matric results.
News
2 months ago

From inmates to top districts: Five things you need to know from 2020 matric results announcement

The DA has accused basic education minister Angie Motshekga of fabricating the 2020 matric results, saying the "real" pass rate was 44.1% and not ...
Politics
2 months ago
Next Article