Six years after the Health Professions Council of SA (HPCSA) was found to be in a state of “multisystem organisational dysfunction”, the collapse of a hearing involving a serial-offending doctor has left it facing fresh criticism.

On February 20, the council had to scrap a hearing to consider the suspension of Cape Town obstetrician and gynaecologist Dr Ganes Anil Ramdhin. It had bungled the process of appointing a committee to deal with the matter.

Ramdhin, who has previously been suspended three times and fined twice by the council, faces charges related to fraud, incompetence and practising beyond the scope of profession.

The latest complaints against him relate to allegations that two cancer patients in their 40s — Zoleka Helesi of Khayelitsha and Beauty Mama of Port Elizabeth — died after he botched gynaecological surgery.

This week Prof Errol Holland, a former dean of health sciences at Limpopo University,  said the council is incompetent and inconsistent in its approach to handling complaints against doctors.

Holland, who was involved in a 2009 decision to withhold a gynaecology degree from Ramdhin, said it was an indictment that a regulator which is “supposed to be the guardian of the health profession and protect the public had been so slack in handling cases of unethical conduct by doctors”.

He added: “The council has a long history of being inefficient and that hasn’t changed a bit. How they handled this matter demonstrates the lack of due diligence.

“It is unbelievable that someone who is facing such serious charges can be allowed to continue to practise even after he had been suspended several times by the very same council and struck off the roll by the UK’s General Medical Council.

“It’s a hard pill for me to swallow when I look at the inconsistencies ... that a doctor who clearly has a history of being unethical and committing gross misconduct is allowed to simply walk away while those with integrity are hunted down like criminals.”

Holland referred specifically to the case of Johannesburg paediatric surgeon Peter Beale, who has been charged with murder after 10-year-old Zayyaan Sayed died after a routine laparoscopic operation at Park Lane Hospital in 2019. The council suspended Beale within two months of the surgery.

“The HPCSA has been very aggressive on one side [while] on the other side, a certain doctor is given a slap on the wrist every time he commits an offence, putting the lives of vulnerable black women even more at risk,” said Holland.

“There seem to be no justice or equity in how the council handles its cases.”

Special Investigating Unit spokesperson Kaizer Kganyago said this week that allegations of maladministration at the HPCSA remain under investigation.

The SIU probe began after a ministerial task team appointed by then-health minister Aaron Motsoaledi filed its report in 2015.

The team, led by the late UCT dean of health sciences Prof Bongani Mayosi, said the council was in such a mess that it could not deliver effectively and efficiently on its primary functions. It recommended disciplinary proceedings against some managers.

The HPCSA was also accused of poor communication with health professionals, excessive delays in processing applications and registration rules that discriminate against foreign-qualified practitioners from developing countries.

The council was found to have a severe structural deficit that failed to cater for a growing multi-professional organisation. This made it nearly impossible for the registrar to manage 12 professional boards. The council also had an inappropriate skills mix, with more lawyers than professionals.

Dr Angelique Coetzee, chair of the SA Medical Association, said this week that despite the task team’s recommendations, many doctors continued to find the HPCSA “to be less than efficient and effective as a regulatory body, and often unable to capably deliver on its primary functions and objectives”.

She added: “The reports around the [Ramdhin] case are concerning and, unfortunately, not uncommon. Many of our members do take a dim view of the functioning of the HPCSA and the apparent 'unfairness' of some of the processes and decisions.

“The council is supposed to fulfil a vital role in our society — guiding the professions and protecting the public. However, when this mandate isn't fulfilled with the necessary skill, expertise and consideration, it has the potential to lead to great injustices and frustration.”

Kwinda denied allegations that the HPCSA had delayed acting against Ramdhin or given him special treatment. “This is the very reason why the suspension regulations were invoked, as the preliminary inquiry process takes a long time while the practitioner continues to practise their profession,” he said.

“Each case is dealt with by the professional board, either at preliminary inquiry or inquiry level based on its merit.”

Kwinda said based on ministerial task-team recommendations, the HPCSA had embarked on a turnaround strategy in December 2017. 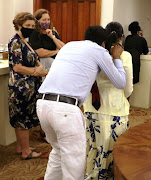 The Women’s Legal Centre (WLC), which is assisting Helesi's friend Lara Foot with her complaint against Ramdhin, said it was awaiting a response from the HPCSA after the suspension hearing collapsed.

Spokesperson Ru du Toit said: “It is clear from the outcome to the suspension hearing ... and the historical delays in dealing with Ms Foot’s complaint on behalf of Zoleka Helesi that the HPCSA has not handled this matter or performed its duty in an efficient manner.

“Ms Foot lodged the complaint with the HPCSA in July 2020 while Ms Helesi was still alive, though seriously ill. Only as a result of Ms Foot’s engagement with Carte Blanche, which then approached the HPCSA for comment, does Ms Foot believe that her complaint was formally acknowledged on November 24 2020.”

Du Toit said the HPCSA had had “more than six months” to constitute the committee to consider the suspension of Ramdhin. This was to prevent him from continuing practising until a formal inquiry could take place.

“We are concerned that the conduct of the HPCSA has resulted in further delays in holding Dr Ramdhin accountable for his conduct, keeping in mind that he continues to practise as a doctor in Cape Town and continues to see women who are in need of health care,” said Du Toit.