President Ramaphosa says SA has past the second wave peak, but urged vigilance as a third is ‘ever present’ 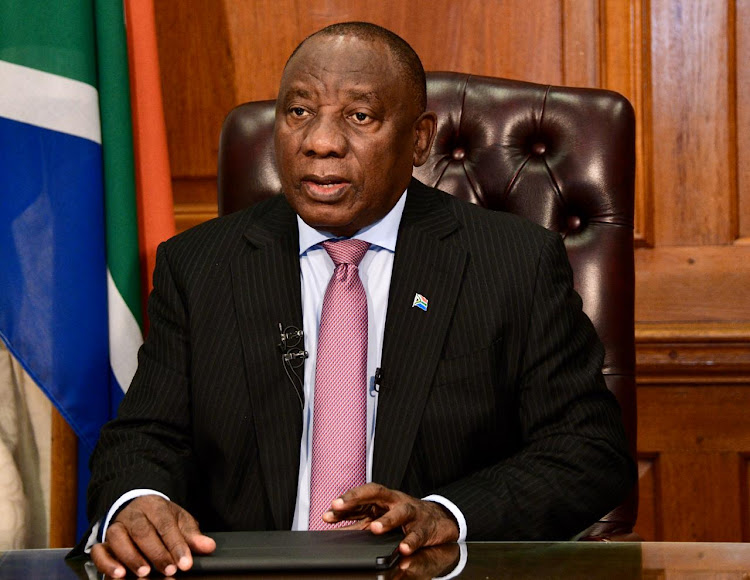 EVER HOPEFUL President Cyril Ramaphosa on Sunday addressed SA on the latest developments regarding the country’s response to the coronavirus pandemic.
Image: Jiarus Mmutle/GCIS

President Cyril Ramaphosa on Sunday night announced the country was moving to Covid-19 alert level 1, which means, among other things, that previously prohibited gatherings are now allowed and curfew is now from midnight to 4am.

Ramaphosa said the decision, taken by cabinet earlier in the day, came because the country has seen a significant decline in Covid-19 cases in recent weeks.

President Cyril Ramaphosa said on Sunday night that SA had "clearly emerged" from the second wave of coronavirus infections.
News
1 year ago

Below is the president’s speech. It has not been edited.

This coming Friday will mark exactly one year since the first case of coronavirus was reported in South Africa. Since then, more than one-and-a-half million people in South Africa have been infected and nearly 50,000 people have been reported to have died from the disease.

So much has changed in our country and in our lives. But the spirit of our people has not changed. You have endured the greatest hardships, but you have remained resolute, united and hopeful.

Now, a year after the virus first reached our shores, we have a clear path towards containing infections and, ultimately, overcoming the disease.

Within less than a year the global scientific community has developed, tested and produced several vaccines that are safe and effective against the disease. South Africa’s scientists and research institutions have made an important contribution to these efforts and have contributed to global knowledge about the disease, including on the emergence of new variants.

We have long held the view that a vaccine would be our most decisive measure to combat Covid-19, and to that extent set up processes at a continental and national level to prepare for the availability of an effective vaccine.

Like many countries, we have now started our vaccination programme.

In the 10 days since we launched our coronavirus vaccination programme, more than 67,000 health workers have been vaccinated.

In the 10 days since we launched our coronavirus vaccination programme, more than 67,000 health workers, who are on the front line of our fight against Covid-19, have been vaccinated.

A new batch of 80,000 doses of the Johnson & Johnson vaccine arrived in the country yesterday and we are steadily increasing the number of doses administered each day.

The start of our vaccination campaign has gone extremely well.

It has shown what we can achieve when we work together as government, the scientific community and the private sector.

All provinces have established vaccination sites and have put in place plans for the expansion of the programme as it gains momentum.

The number of sites that will be available for vaccination will be expanded next week from 17 sites to 49 sites. Of the 49 sites, 32 will be at public hospitals and 17 sites in private hospitals. This includes sites in rural areas to improve access to rural health-care workers.

Once the vaccination of health-care workers has been completed, we will begin with phase two of the vaccine rollout in late April or early May. Phase two will include the elderly, essential workers, persons living or working in institutional settings and those with comorbidities. For this phase, we will be activating many more sites for vaccination in the public and private health-care sector so that we can reach as many people in the shortest possible time.

We have recently signed an agreement with Johnson & Johnson to secure 11 million doses. Of these doses, 2.8 million doses will be delivered in the second quarter and the rest spread throughout the year.

We have also secured 20 million doses from Pfizer, which will be delivered from the second quarter.

Additionally, we have secured 12 million vaccine doses from the Covax facility and are in the process of finalising our dose allocation from the African Union.

We are in constant contact with various other vaccine manufacturers to ensure that we have the necessary quantities of vaccines when we need them.

'We will be secured': Ramaphosa says SA vaccination rollout plan is on track

President Cyril Ramaphosa on Sunday night assured South Africans that his government would ensure there were sufficient vaccines for the country.
Politics
1 year ago

Fellow South Africans, when I last addressed the nation, at the beginning of this month, the country had passed the peak of the second wave of coronavirus infections. Driven by a new variant of the virus, the second wave was far more devastating and caused greater loss of life than the first wave.

The country has now clearly emerged from the second wave. New infections, admissions to hospital and deaths have fallen significantly and continue to decline steadily.

This dramatic decline in cases over eight weeks is due to a combination of the public health measures introduced, changes in behaviour and accumulating immunity in those who became infected in our communities. We were able to emerge from the second wave because most people adhered to the tighter restrictions and observed the basic health protocols, including wearing masks in public and social distancing.

The measures we had to put in place in December were necessary to contain infections and prevent our health facilities from being overwhelmed. They were necessary to save lives. We had to undertake these measures knowing that they placed restrictions on the daily lives of everyone in this country. They caused great inconvenience to many. And while we made every effort to keep the economy open, we also knew that there were parts of the economy that would be affected and that wouldn’t be able to operate fully.

Our approach has always been that such restrictions should not remain in place longer than is absolutely necessary to contain the disease.

Due to the decline in infections, the country can now ease some of the restrictions on movement and activity. Once again, we do so cautiously. Even after a sustained period of relatively low transmission, we have seen how the number of new infections can rise rapidly and without warning.

Based on an assessment of the current state of the pandemic in the country, cabinet decided earlier today to move the country from coronavirus alert level 3 to alert level 1. The new alert level will come into effect later this evening, once the regulations have been gazetted.

This will mean that:

As we ease restrictions, we cannot let our guard down. The few remaining restrictions under alert level 1 are meant to maintain low levels of infections and, in particular, to prevent super-spreading events.

The new variant, known as 501Y.v2, is now the dominant variant in the country. Because the new variant is transmitted more easily, it has the potential to infect more people, place a greater strain on our health system and lead to a greater loss of life.

Please go for a test if you have any symptoms of Covid-19.

These measures are not merely to protect each of us, but to also protect those we love and care for.

Following these measures is about protecting yourself, your family and your community. It is about being responsible and caring. We must continue these measures even as more and more people are vaccinated.

Vaccines significantly reduce the likelihood of a person developing symptoms and becoming seriously ill, and they reduce the overall rate of infection in a population. We therefore need to see vaccines as one of the measures that we have in our coronavirus toolkit to contain the pandemic.

As we have said in the past vaccines are now the most effective measure that we have.

Still, we will only be able to ultimately overcome the pandemic if we continue to practice all the other prevention measures as well.

We must do all this both so that we defeat the pandemic and so that we can accelerate our economic recovery. We must do this to restore our country to growth and get people back into work. 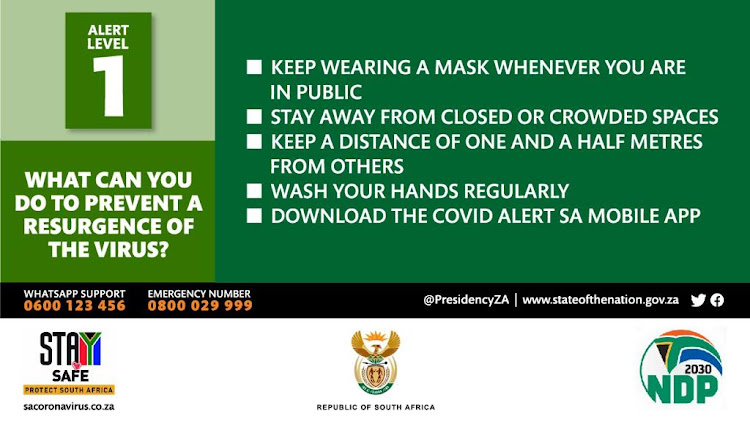 Some of the tips to prevent a resurgence of Covid-19 infections, according to a graphic The Presidency released on Sunday following an address by President Cyril Ramaphosa.
Image: The Presidency

Even as economic activity returns, even as we roll out our employment stimulus and infrastructure investment programmes, even as we undertake economic reforms with greater urgency, many businesses are still struggling. Many people still do not have their jobs back and many households are still feeling the effect of having lost much of their income.

As I announced in the state of the nation address, we have therefore extended the period for the Special Covid-19 grant by a further three months, until the end of April. We have also extended the UIF’s special Covid-19 wage support benefit until 15 March 2021 for those sectors of the economy that have not been able to operate over this period.

These measures have been shown to be effective at reducing the economic impact of the pandemic on some of the most vulnerable in our society.

Our country’s public finances are, however, extremely constrained, and we cannot keep such relief measures in place indefinitely.

The return to alert level 1 means that most of the remaining restrictions on economic activity have been removed. We expect this to lead to higher consumption spending, bolstered by the steady recovery in employment. We expect businesses to implement the plans they may have put on hold.

As we undertake further structural reforms, this will entrench the green shoots we have begun to see in the economy. That is why all our energy and effort must now go into growing the economy — and this includes keeping infections down.

For this reason, among others, the easing of restrictions should not be viewed as a reason to abandon precautions.

As our vaccination campaign gathers pace, we must continue to exercise extreme caution to protect ourselves and others.

The threat of a third wave is constantly present, as is the threat of yet more new variants.

As we witnessed last year, our actions as individuals and as a collective will determine whether and how soon we experience a resurgence of the virus.

In the meantime, the virus continues to circulate in our families, our workplaces and our communities.

As our vaccination campaign gathers pace, we must continue to exercise extreme caution to protect ourselves and others.

Together with our scientists and experts we will continue to monitor the situation closely and to adapt our approach in a responsive and flexible manner.

This pandemic has taken much from us, but it has not taken our strength, our courage or our sense of solidarity as a people. It has not dampened our spirit or weakened our resolve. Our uniquely South African spirit has allowed us to remain steadfast in the face of an unprecedented threat, and which will continue to inspire us as we chart a path to recovery.

Let us remain united, hopeful and determined as ever to face down this challenge.

May God continue to bless South Africa and protect her people. I thank you.