WATCH | ‘You broke me and my family’: emotional message to killers from slain cop's widow

Breakfast had been married to SAPS constable Mninawa Breakfast for four years when she heard the news that he had been killed in the early hours of Sunday morning while on patrol in Bloekombos in Cape Town. Breakfast was the sixth police officer to be murdered in 12 days in SA.

“He loved me and the children very much and he showed this through his status updates on Facebook and WhatsApp. We were always together. He wanted me to be with him wherever he went,” said Lulamela. 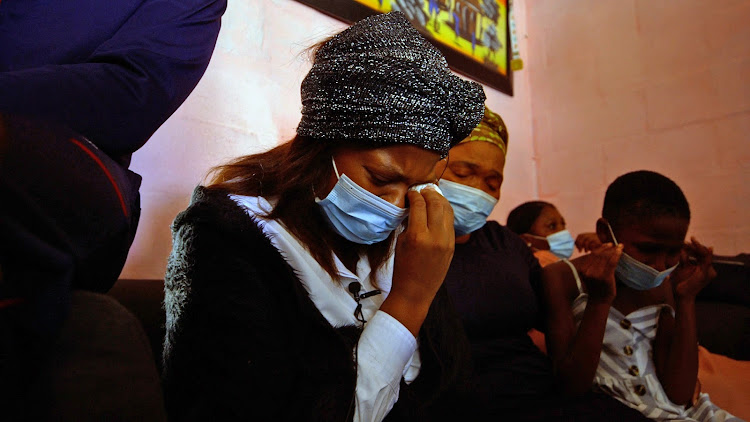 Lulamela Breakfast sobs at her home in Langa, Cape Town, after police minister Bheki Cele went to pay his respects after her husband and his partner were killed on Sunday morning while on patrol.
Image: Anthony Molyneaux

Mdoko's family said he was a kind man.

“He was always willing to help people. He was also very helpful to disabled people. We did not treat him as a policeman ... we treated him like a resident of Kraaifontein. No-one deserves to be killed like that,” said Jacob Mini, a family friend of Mdoko.

“We live in fear to such an extent, even if you go outside you are worried you might get killed. As residents, let's unite to fight crime and protect our police as well as our community.”

Mxoleleni Sikhala's court appearance coincided with another visit by the police minister to the Western Cape after multiple shooting incidents ...
News
1 year ago

Police minister Bheki Cele visited the families of the two policemen on Tuesday and spoke to journalists about the high incidence of violence against the police.

“The same thing happened in KZN, where people resisted police checking their compliance — here they did too.

“We have ordered the police to go out and hunt [the people who did this]. Police will have to bring them dead or alive and make sure those people get punished,” he said.

One man, aged 32, has been arrested and will be appearing on March 9 in connection with the double murder.

A 32-year-old man has been arrested in connection with the murders of two Cape Town police officers who were on patrol at the weekend.
News
1 year ago

Time to get illegal guns off our streets: New Western Cape top cop after spate of murders

Dead or alive, we will get police killers, says Bheki Cele after visiting family of slain cops

Mystery surrounds the fatal shooting of two Pietermaritzburg police officers who died in a hail of bullets after being ambushed in Taylors Halt on ...
News
1 year ago