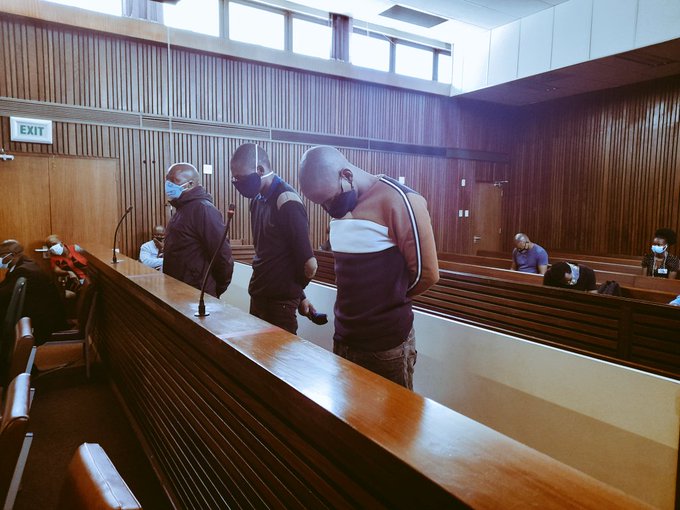 The three men implicated in the killing of Gabisile Shabane and her nephew, Nkosikhona Ngwenya, in the dock of the high court sitting in Middelburg, Mpumalanga.
Image: Naledi Shange/TimesLIVE

Whatever came out during consultations between a Legal Aid lawyer and the man alleged to have plotted and carried out the butchering of Gabisile Shabane was enough to make the lawyer make a U-turn on representing him in the case.

Shabane, a 13-year-old girl from Emalahleni (Witbank) with albinism, was kidnapped at gunpoint together with her 15-month-old nephew, Nkosikhona Ngwenya, from her family home in January 2018.

Her body was mutilated and some of her organs, including her genitals, ovaries, arms and head, were removed. Her killing was believed to have been muti-related.

Ngwenya was dumped in a swamp next to the N4 highway.

On Wednesday, following a two-hour consultation with traditional healer Thokozani Msibi, lawyer Werner Smit told the high court sitting in Middelburg that his mandate with Msibi had been terminated. He would not disclose the reasons for this.

We were just disagreeing on facts. I tell him this and he tells me something else.

Traditional healer on his conversation with his lawyer

Mpolweni told the court this was not the first time Msibi had changed a Legal Aid lawyer.

He said he was not sure whether this was a tactic being used by Msibi to delay the proceedings, adding that Legal Aid may not have another lawyer to offer him.

Msibi maintained he had not fired Smit.

“The first attorney I had, I did not terminate his mandate. At the last proceedings, he said he would attend to me after he had assisted someone else but he never came back to me,” said Msibi.

“With Mr Smit, I never terminated his mandate. We were just disagreeing on facts. I tell him this and he tells me something else. He is the one who I said he should tell the court he is not going to proceed with assisting me,” Msibi told the court.

Brauckmann said he hoped Msibi was not taking chances with the court.

Accused in case of murdered teen with albinism dies before trial

One of the people implicated in the murder of Emalahleni teenager Gabisile Shabane and her cousin Nkosikhona Ngwenya has died before going on trial.
News
10 months ago

Outside court, a string of witnesses, including Gabisile’s mother and her sister, who is the mother of Nkosikhona, and a group of people from far as Swaziland had been waiting and hoping the matter would proceed.

Part of the prosecution team’s frustration stemmed from the fact that the witnesses from Swaziland had initially been scheduled to take the stand this week and return to their home country by Friday. The case, however, was postponed to Friday when it would be known whether Msibi would be granted another lawyer.

Mpolweni told the court Legal Aid had said the first two lawyers granted to him were his right but a third would simply be a privilege.

On Monday, the trial had also been delayed, but this was because the vehicle transporting Msibi to the court from Kgosi Mampuru prison in Pretoria had broken down 40km from the court.

Msibi is an integral part in solving Shabane’s murder. Some of her body parts were allegedly found at his home days after she went missing.

He is set to be trialled alongside two other men, Knowledge Wezi Mhlanga and Mthobisi Brilliant Mkhize.

Another accused, Mfanasibili Gamedze, who like Msibi was originally from Swaziland, has since died. Gamedze was being held in police custody in Swaziland and died while awaiting extradition back to SA. The circumstances surrounding his death were not immediately disclosed but are expected to be addressed during the trial.

The first was Sabelo Khubeka. At the height of the search for Shabane and her nephew, after their disappearance in 2018, Khubeka had lied about having knowledge of the whereabouts of the children. He tried to extort money from their family when he demanded a ransom. He was traced to Vosloorus, arrested and upon questioning found to have no clue about the missing children. He was jailed for five years.

The second is Josiah Thubane, a qualified teacher-turned-struggling businessman. Thubane, who claimed to be haunted by his deeds, confessed to his part in killing Shabane, admitting it was a muti killing. He had allegedly been told that getting the body parts of a person with albinism could assist in boosting his struggling business.

He pleaded guilty on all charges, including two counts of premeditated murder, two counts of kidnapping, housebreaking with intent to commit murder and one count of violation of a corpse. He was handed two life terms for the killings.

Thubane said Ngwenya was an unintentional casualty in the matter. The 15-month-old was mistaken for another child in Shabane’s home who also had albinism. Once they had noticed their error in taking Ngwenya, he was dumped over a bridge on the N4 where he drowned in a river.

Ngwenya’s body had already decomposed in the water. The post-mortem report said “no anatomical cause of death found”.

With Shabane, her post-mortem report concluded “cannot [be] determined” because of her missing organs.

Almost nine months after being abducted from her home and killed for her body parts‚ 13-year-old Gabisile Shabane who had albinism‚ will finally be ...
News
3 years ago