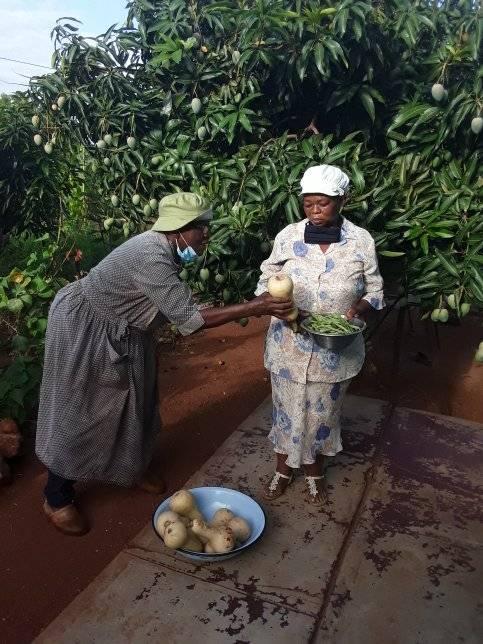 Being in hard lockdown for a year, the elderly in care homes were starting to get frustrated by their isolation. With lockdown levels being eased to alert level one this week, they are excited and happy at the prospect of being able to reconnect with their loved ones.

Christinah Ngobeni, manager of Ke matla old age home in Garankuwa, said most families of the elderly residents at the home were concerned during lockdown that they couldn't see their families any more.

The facility accommodates those older than 60.

“It has not been easy because we have old people here and they have families who would like to come and check on them on a regular basis, but because of the Covid they were not allowed. It was not right for them because they were always complaining and they also missed home. But we had to do what we had to, to keep them safe,” she said.

Most families understood that stopping visits was for their own safety.

“The huge problem for the elders was that they were not getting visitors any more and that they can't visit their homes or even go out to funerals like before,” she said.

Silas Phaho, who is a husband of one of the residents at the home, was happy that he could now visit his wife at the home.

“It was very bad that I couldn't see my wife during lockdown but I understood that it was for our safety,” said Phaho.

His wife said she was also excited that her husband could now visit.

“I am very happy that I can now see her. We are also hopeful that the vaccine will stop the virus,” said Silas.

Letty Ditinti, a resident at the home, said she was thrilled to be able to see her family after such a long time.

“The virus has been hard on all of us, my heart is painful that I couldn't see my family. I am happy that I didn't get the virus and that my family is safe. I am also happy now that I will get to see my family as they have now opened the country. I will be happy when the virus goes,” she said.

Despite an appeal from the industry, all banks and financial institutions have been ordered to ensure their ATMs provide hand sanitiser for users.
News
1 month ago

Ngobeni said a lot changed during the lockdown and everyone had to adhere to strict regulations.

She said they had to stick to strict routines to protect the early in the home.

“We also had to change our ways of living too because we were taking care of the elderly. We had to abide by every rule so that we could minimise the risks of infecting the elderly,” Ngobeni said.

Ngobeni said they have 21 residents and are expecting more to come in soon.

“We tried to keep them busy by giving them exercises to do and some gardening. Now we have a beautiful garden,” she said.

Laudium retirement home manager Ramesh Chagan said though there were frustrations and unhappiness during the hard lockdown when residents couldn't see their families, they understood that it was for their own safety.

“There were frustration and unhappiness but I had a meeting with residents every Friday and they understood what was going on and they were fine with it. We had a telephone so that they could talk to their families over the phone,” he said.

Chagan said they were now allowed one visitor at a time.

“So when we went to level 5 we didn't allow anyone from outside to come in at the home. We even made arrangements for our staff to be accommodated at one of our homes where there is space so that they don't get the virus. Our biggest concern was that they were travelling by taxi and could have easily caught the virus,” he said.

ONE YEAR OF COVID-19: WATCH | South Africans reflect on life during the pandemic

We took to the streets to chat to South Africans about their biggest lessons, regrets and some of the positives to come out of the pandemic.
News
1 month ago

ONE YEAR OF COVID-19: IN PICS | A look at Covid-19 through the lenses of our photographers

SA has had its own unique experience of the Covid-19 pandemic as the country marks exactly a year since the first case.
News
1 month ago
Next Article