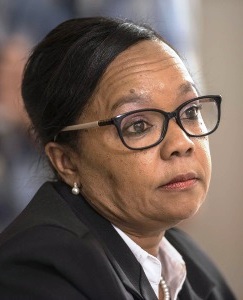 Western Cape judge president John Hlophe's wife, Judge Gayaat Salie-Hlophe, alleged that Goliath had attempted to influence her to lay false criminal charges against Hlophe, encouraged her to divorce her husband and stop using his surname, and referred to Hlophe as an “old black man”.

While recommending the allegations be investigated, the committee dismissed a complaint by Goliath that Salie-Hlophe was improperly involved in the management of the court where she also works, enjoys preferential treatment and has made unwarranted complaints against her colleagues.

Hlophe lodged a counter-complaint against Goliath, saying she was guilty of gross misconduct for making false allegations against him. He also accused Goliath of being a racist and of meddling in his marriage to Salie-Hlophe.

In July last year, the Judicial Conduct Committee recommended that Hlophe face an impeachment investigation by a Judicial Conduct Tribunal. It dismissed all counter-allegations made by Hlophe against Goliath.

Hlophe is appealing against that decision.

Judge Nambitha Dambuza was in March last year asked by the acting chair of the Judicial Conduct Committee, deputy chief justice Raymond Zondo, to inquire into the complaint by Goliath against Salie-Hlophe.

However, before Nambitha was appointed, Salie-Hlophe issued a media statement on January 28, 2020.

In that statement, Salie-Hlophe remarked about what she considered an “unhealthy obsession” of Goliath with her marriage, to the extent that on some occasions, Goliath told Salie-Hlophe to stop using her marital name and warned her that if she did not “exit” the marriage, people would wonder why she was married to an “old black man”.

In her reply to the committee, Goliath denied the statements that Hlophe and his wife accused her of, particularly the racial statements and her alleged encouragement of Salie-Hlophe to divorce Hlophe.

In her initial complaint, Goliath said she had been sidelined by Hlophe after Salie-Hlophe involved her in a private domestic incident at Hlophe’s house in 2017.

“This is the only aspect in respect of which I am satisfied that a formal hearing would contribute to determining the merits of the complaint,” Dambuza said.

Dambuza said in the complaint by Goliath against Hlophe, Goliath's alleged conduct and utterances in relation to the incident at Hlophe's home were central to Hlophe's counterclaim against Goliath, particularly in relation to racism.

Dambuza said it was imperative that this issue be properly determined.

“If indeed (Goliath) made the alleged statements, particularly the act of urging Judge Salie-Hlophe to lay false criminal charges against (Hlophe), it seems to me that that would prima facie be impeachable gross misconduct.

“Similarly, if Judge Salie-Hlophe falsely accused [Goliath] of having said these things, that too would be impeachable gross misconduct. These aspects of the complaint therefore fall to be investigated by a tribunal,” Dambuza said.

The judiciary is confident that the wheels of justice are gaining speed and will soon be turning even faster. Speaking at a meeting of the judicial ...
News
7 years ago