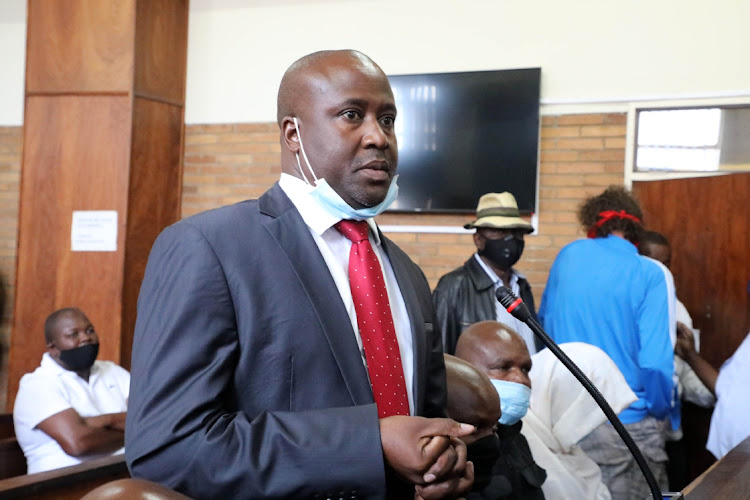 The ex-wife of former state security minister Bongani Bongo has been added as an accused in his money laundering and corruption case in the Mbombela magistrate's court.
Image: Antonio Muchave

The ex-wife of former state security minister Bongani Bongo has been added as an accused in his corruption and money laundering case in the Mbombela magistrate’s court.

The National Prosecuting Authority (NPA) said on Monday Sandile Nkosi had handed herself over to the police and appeared briefly in court. She was granted bail of R10,000.

A transaction in her personal bank account led authorities to believe she may have been part of fraudulent activity in which her former husband and 10 others were implicated.

Former state security minister Bongani Bongo and 10 others appeared briefly in the Nelspruit magistrate's court on Wednesday on charges of ...
News
1 year ago

Nkosi will join Bongo and the 10 other accused when the case returns to court on May 4.

The charges are in connection with the R37.5m sale and purchase of a farm in Naauwpoort, eMalahleni, by the Mpumalanga department of human settlements, ostensibly on behalf of the eMalahleni municipality.

Some of the accused, acting in concert and with common purpose, allegedly exploited the normal phenomenon of purchase of land by the government by misrepresenting facts to the department regarding ownership and the true sale price of the farm.

The NPA said the real owner of the farm, Petrus Johannes van Tonder, was paid only R15m for the farm from the R37.5m.

The money was paid into the trust account of Singwane Attorneys in their capacity as conveyancer appointed by the department.

Singwane, who was not instructed by the department, also allegedly paid R22.5m to a company known as Little River Trading, which, the state alleges, enabled the accused to steal the money.

'This conspiracy is meant to deviate from ensuring that there is economic freedom in our lifetime,' Bongo said after his discharge.
News
10 months ago

At the time these alleged crimes were committed, Bongo still worked in the legal department of the Mpumalanga human settlements department.

The companies linked to them were also listed and charged:

He had been accused of attempting to bribe Eskom inquiry evidence leader Ntuthuzelo Vanara.

Speaking outside court after that hearing, Bongo said a faction within the ANC was behind his prosecution because they believed he had access to files containing the names of “spies”.

Organisation calls for suspension of judge Hlophe after Bongo’s acquittal

Freedom Under Law has called for Western Cape judge president John Hlophe to be suspended pending the conclusion of the proceedings for his removal ...
News
10 months ago

The state's second and third witnesses in the corruption case against former state security minister Bongani Bongo backed up aspects of the testimony ...
News
11 months ago

Former state security minister Bongani Bongo has launched a scathing attack on the man who accused him of offering a bribe in exchange for his ...
News
11 months ago