'We came in and educated people,' says MSF health promoter after praise from Ramaphosa

Azalet Dube is a health promoter with Medecins Sans Frontieres, a teacher by profession, a counsellor and a family therapist, and has been criss-crossing communities in Gauteng spreading the truth about Covid-19 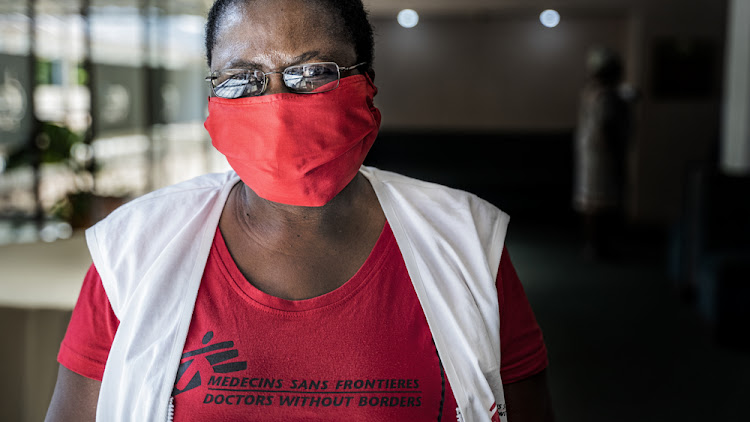 Azalet Dube, a health promoter working with MSF, is seen at a health promotion session on Covid-19 in the Johannesburg inner city.
Image: Tadeu Andre

For nearly a year, Azalet Dube has been criss-crossing communities in Gauteng, spreading the truth about Covid-19.

And on International Women's Day on Monday, the 55-year-old's efforts were praised when President Cyril Ramaphosa mentioned her by name in his weekly newsletter.

Dube said she felt honoured and special to have been recognised by the president.

Dube is a health promoter with Medecins Sans Frontieres (MSF), a teacher by profession, a counsellor and a family therapist. Since the outbreak of Covid-19 she has spoken to thousands of people about the pandemic.

“We had to dispel so many myths and views that people had on the virus. In the beginning, some people didn’t even see the need to wear masks as they perceived Covid-19 to be a 'white people’s disease'. Others questioned the existence of the virus and didn’t believe it’s there,” she told TimesLIVE on Monday afternoon, just hours after being one of eight women singled out for Ramaphosa's praise.

Marking International Women's Day in his newsletter Ramaphosa said the country’s efforts to contain the pandemic have been boosted by thousands of field workers — like Dube, who “who went into communities to raise awareness about the disease, who worked in health facilities as a contract tracer and who provided psychosocial support to families and individuals in distress”.

President Cyril Rampahosa used his weekly newsletter to praise the country's women, saying many were at the forefront of the country's Covid-19 fight.
Politics
7 months ago

Dube said they worked with communities to train leaders, including those from faith-based organisations, who in turn made sure that the information reached those who needed it.

When the virus hit many households, Dube said they received lots of calls from people who asked that they come back into their communities because they didn't know what to do. In certain cases, she says, she offered psychosocial support to families that lost loved ones to Covid-19, or to those who tested positive for the virus.

“People would call us panicking that they were positive. Some said they would die, so  and we came in and educated them about the virus, how to take care of themselves and to isolate properly,” she said.

When the second wave of infections came in December last year, Dube said they continued to work on the ground and taught people how to protect themselves against contracting the virus.

The work is ongoing, and she said with every development with the virus they had to be present to make sure they provided the correct information.

“When the issue of vaccination began, there was so much fake news spread which made people not want to get vaccinated. There were so many conspiracy theories going on, and we continued to give people the right information and reassure them that the vaccines are safe. We are seeing slowly that people are beginning to change their minds on vaccination, and most of them said as soon as the rollout in their categories kicked off, they would be first in the line,” she said.

According to Dube, the other thing that helped with changing peoples mind on vaccines was that they see some health-care workers who have been vaccinated and see there is nothing wrong with it.

Auckland, New Zealand's biggest city, emerged on Sunday from a strict weeklong lockdown imposed after a community cluster of the more contagious UK ...
News
7 months ago

South Korea said on Monday it had found no link between the coronavirus vaccine and several recent deaths, as it ordered nearly 100,000 foreign ...
News
7 months ago

Italy's coronavirus death toll passed the 100,000 mark on Monday and Prime Minister Mario Draghi warned that the situation was worsening again with a ...
News
7 months ago