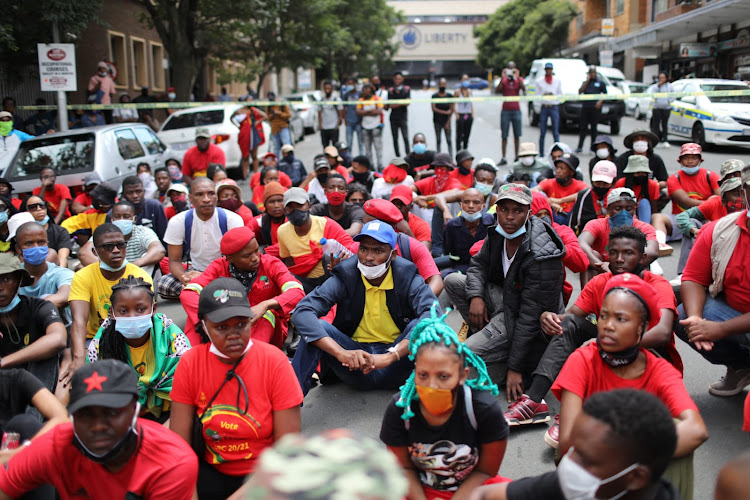 Students gather to pay respects to a man who died allegedly after being shot at close range with rubber bullets by police during a student protest in Braamfontein, Johannesburg, on March 10 2021.
Image: Alaister Russell/The Sunday Times

Student protests on Tuesday and Wednesday at Wits University have shaken the country after one person was killed.

Students are protesting against what they call financial exclusion, also saying NSFAS should confirm funding.

The minister said the government is working on a solution and that options would be presented to the cabinet for consideration on Wednesday.

Here's what you need to know about the protests:

'All students must register'

Wits student representative council (SRC) support officer Solami Buthelezi said protesters want the institution to financially clear students and allow them to register. She said NSFAS defunded some students while first-year students are “vulnerable because they don't know where to go”.

Wits spokesperson Shirona Patel said the university last year established a Wits Covid-19 relief fund worth R10m which assists students with historical debt of up to R120,000 to register and secure accommodation.

She said the scheme assisted about 900 students last year and 600 have benefited so far this year.

Students took to the streets under the banner #asinamali (we do not have money).
News
3 months ago

The man had exited a clinic in Braamfontein when he was shot twice, allegedly by police.

He succumbed to his injuries and was declared dead at the scene, according to Herbst.

Cebolenkosi Khumalo, chairperson of the Wits Progressive Youth Alliance (PYA), said students need support as some parents lost their jobs last year at the height of the lockdown and Covid-19 pandemic.

Buthelezi said police used rubber bullets and stun grenades to disperse protesters but that they would continue with demonstrations.

The Independent Police Investigative Directorate (Ipid) says four investigating officers have been tasked to investigate the shooting in ...
News
3 months ago

Independent Police Investigative Directorate (Ipid) spokesperson Ndileka Cola said the directorate dispatched four officers to investigate the death and will locate the person with the video footage of the incident, and identify eyewitnesses.

“Furthermore, Ipid will ensure the body is protected and carried safely to the mortuary. If this incident is within the mandate of Ipid, the normal investigation process will unfold,” said Ndileka.

Nehawu condemned police brutality and called on Nzimande to find a solution to students' grievances.

Two Wits University student reporters were injured and three people arrested after violent clashes between protesters and the police in Braamfontein ...
News
3 months ago

'Students feel unsafe' and police are accused of brutality

Wits student Bongani Makhanya said students were feeling emotional and unsafe during protests. He accused the police of brutality. He called for accountability.

“We don’t feel safe, we have always been brutalised. Yesterday [Tuesday] they did the same thing at the medical school — they fired, beat us up and arrested some of us.

“They didn’t give us time to disperse — they shot at us at first glance, no warning at all. As a black student, how do you feel safe when there has been repeated violence against us?” he asked.

Three protesters were detained at Hillbrow police station during clashes with police and two student journalists were injured. Patel said the university has counselling and health services available to members of the community who require assistance.

Patel said the university is committed to seeking solutions to issues affecting students.

“The university condemns any form of violence and calls on all people to keep calm during this very difficult time,” she said.

Homophobic language and hate speech against transgender people are on the increase among European politicians, an advocacy group said on Tuesday as ...
News
4 months ago

Students took to the streets under the banner #asinamali (we do not have money).
News
3 months ago