Artists, creatives, heritage sector workers and cultural workers have camped at the NAC in Joburg for nine days to try to compel them to respond to concerns 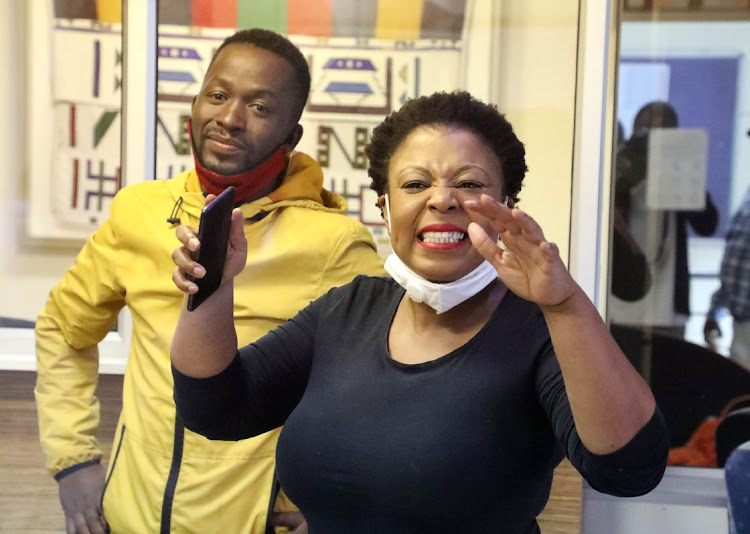 Thami AkaMbongo and Sibongile Mngoma protesting inside the National Arts Council premises in Newtown, Johannesburg. Among other demands, they want to know when payments are being finalised for those who have signed contracts.
Image: ANTONIO MUCHAVE/SOWETAN

Artists are at loggerheads with the National Arts Council (NAC) over alleged lack of transparency in the allocation of R300m from the presidential employment stimulus programme (Pesp).

Artists, creatives, heritage sector workers and cultural workers have camped outside the NAC in Johannesburg for nine days to try to compel them to respond to concerns over payments.

Sibongile Mngoma, an opera singer, is spearheading the sit-in that took place after the NAC council suspended CEO Rosemary Mangope and CFO Clifton Changfoot, pending an investigation in relation to the management of funds.

“It’s uncomfortable but we’re determined that we should get answers. It’s been years of artists having the same concerns, it didn’t start now with Covid. The NAC is failing to come clean about what has happened to the money and how it was allocated,” Mngoma said.

Artists were supposed to come up with projects that reimagined audience interaction with the arts, culture, and heritage, the creation of new paradigms for viewing and understanding the place of the arts, during the Covid-19 pandemic.

WILLIAM GUMEDE | A library changed my life, and books can still change our world

Creatives submitted their proposals and those that were approved had to conclude their projects. The outcry is that a lot of those who did the work were allegedly not paid.

“People are in a worse situation than before. They signed contracts and they delivered. They [NAC] are now dilly-dallying and lying about what’s going on. When you check with artists they are still not paid," said Mngoma.

“We tried to get assistance from the council and management. The minister came out and said he endorses the work that has been done at the NAC, so we should leave them alone. We are seeking intervention from the president. We have moved past trying to speak to them.

“People have lost their homes, cars, and expensive equipment. Many artists have moved back home. I have to cope, I don’t have a choice because a lot of people come to me for help too,” she said.

The NAC is disbursing funding through two streams. The first focuses on job retention via a wage subsidy and is for organisations, institutions, SMMEs and individuals in the arts, culture and heritage sector. The second stream focuses on projects that can create income opportunities, said the NAC on its website.

'The minister must do better'

Dr Buselaphi Gxowa, a maskandi artist, said she has been struggling to make ends meet and her vehicle had been repossessed.

“We didn’t get anything from the department. We don’t even have food. Our department doesn’t care about its people,” she said.

“I can’t survive, my car was repossessed because of the strain of Covid-19. The maskandi artist is poorly treated. The minister must do better. A lot of artists are dying because of depression. I recently buried a friend due to depression as a result of not having an income.

“Our traditional living legends are not getting a cent. They also take all the money for jazz artists - that’s who they prioritise. They gave us R700 for food parcels some time last year, and that was all.”

Kgauhelo Dube, an arts and culture strategist, said she had been without an income since last year.

“I’m a consultant in the arts. I rely on clients. In March I had a contract to work on a book tour and publicity and it had to be cancelled due to Covid-19. I lost the only income that I had. I’m a mother of two children. We didn’t have school fees challenges, as I home school, but the resources for their learning were needed still.

“People don’t even have access to hope. The pandemic highlighted the problems in the arts. Some of us gave up a long time ago to apply, and we got tired.

“Artists are not disorganised. It’s an economic cluster. Our creative output has the potential to create jobs,” Dube said.

The NAC and the department have been contacted for comment. The story will be updated if and when they respond.

Mampara of the week: Nathi Mthethwa

Nathi Mthethwa is either a slow learner or just utterly incompetent.
Opinion & Analysis
1 year ago