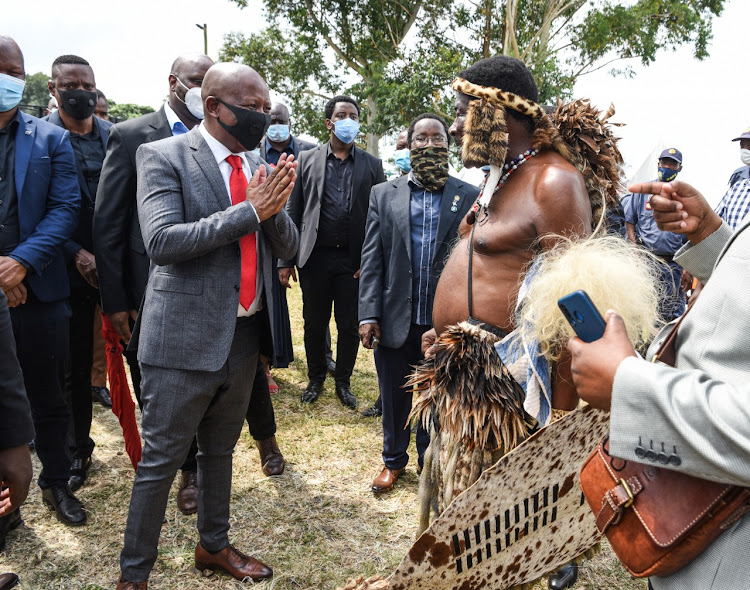 EFF leader Julius Malema preached unity and continuation of Zulu King Goodwill Zwelithini's legacy during his visit to the royal palace on Tuesday.

Malema was accompanied by EFF members including Floyd Shivambu to convey their condolences after the king's passing last week.

Addressing the media from outside the royal palace, Malema said the king's successor must maintain the relevance of the Zulu monarchy, as was done by the late monarch. He said disunity had rendered other monarchies irrelevant.

“The death of the king should not serve as a source of divisions, if anything, it must be something that unites them,” he said.

[In Case You Missed It]: CIC @Julius_S_Malema says the Zulu Royal Family is not alone, the entire Africa and the diaspora is with them.

Adding that many monarchs are not respected because of how they carry themselves and deal with issues of unity. #EFFAtZuluRoyalPalace pic.twitter.com/fjGWo9dxdz

Malema said King Zwelithini was a progressive leader who did not shy away from engaging in debates about important issues.

He said traditional leaders are important role players in tackling the land issue.

“We have always emphasised in the EFF that the custodians of the land as it were now, are the kings and chiefs and we need to work with them to make sure that we redistribute the land and give it to our people.

Scores watched through social media as Malema and other leaders engaged the members of the royal family. Many weighed in on the visit on Twitter, using #EFFAtZuluRoyalPalace.

Here's a glimpse of what was said:

I've just passed Julius Malema and EFF members at Ballito there are on their way to Nongoma to visit the family of the Late King Zwelithini.

Am now convinced that Malema really admired the Zulu King, his convoy is massive. #EFFAtZuluRoyalPalace

#EFFAtZuluRoyalPalace
Our leadership paying last respect to the zulu monarch 👑 🙏🙏🙏🙏

In KZN we call this "isipheko" it's the way of showing sympathy and ubuntu with whatever you may afford to the mourning family, even a bucket of scones is highly appreciated. Indeed @Julius_S_Malema you're showing the true defination of Ubuntu
Keep rising commander ❤️❤️❤️ https://t.co/uWHwTe1HsY

Covid-19 regulations will not deprive thousands wishing to pay their last respects to King Goodwill Zwelithini, despite lockdown level 1 restrictions ...
News
1 year ago

Economic Freedom Fighters leader, Julius Malema has hit out at “cowards” who were critical of the late Zulu monarch, King Goodwill Zwelithini after ...
Politics
1 year ago