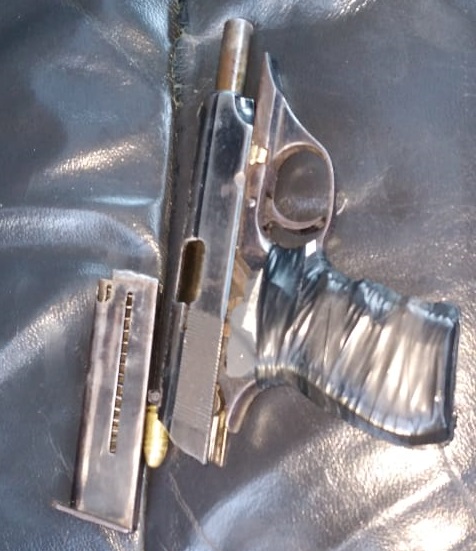 One of the firearms seized by police in Cape Town.
Image: SAPS

Two police vehicles were damaged after being pelted with stones by community members in Ravensmead, Cape Town, when officers tried to detain a suspect after a shoot-out.

The man allegedly produced a firearm and started shooting at the police, who returned fire and apprehended the suspect, recovering a 9mm Norinco firearm with its serial number filed off and 14 rounds of ammunition.

Van Wyk said while the officers arrested the suspect, the community pelted them with stones.

Two police vehicles were damaged but the officers managed to detain the 32-year-old suspect and take him to Ravensmead police station. No officers were injured.

“He will appear at Goodwood magistrate's court on Friday on charges of attempted murder, possession of a prohibited firearm and ammunition as well as an attack on police officials,” said Van Wyk.

Cape Town police had more success recovering guns on Wednesday in Mitchells Plain, but with less drama, when they arrested a 21-year-old for illegal possession of a firearm and ammunition.

Van Wyk said when the officers stopped a driver to search a vehicle they found a 9mm firearm with one round of ammunition. The serial number was filed off.

“A 21-year-old man was arrested on charges relating to the possession of a prohibited firearm and ammunition and is expected to appear in the Mitchells Plain magistrate's court once charged.”

Police minister Bheki Cele told mourners in KwaNdengezi that he wished Capt Thulani Molefe, who died in a hail of bullets, could have been spared to ...
News
1 year ago

Firefighters were petrol bombed and their vehicles stoned three times in two days while responding to emergencies in neighbourhoods gripped by ...
News
1 year ago