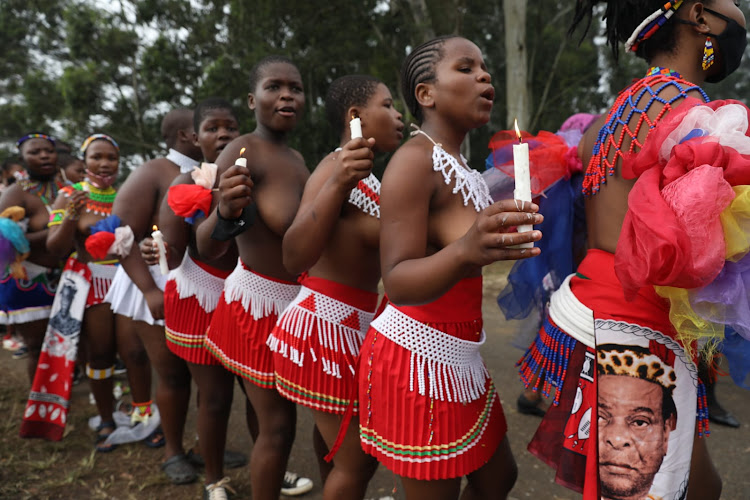 Zulu maidens outside the KwaKhethomthandayo Royal Palace in Nongoma, where dignitaries have gathered for the memorial service of the late Zulu monarch King Goodwill Zwelithini.
Image: Sandile Ndlovu

Princess Charlene of Monaco is among dignitaries and politicians who arrived at the KwaKhethomthandayo Royal Palace in Nongoma, northern KwaZulu-Natal, on Thursday morning ahead of the official memorial of the late Zulu monarch, King Goodwill Zwelithini.

The king was laid to rest in a private funeral on Wednesday night, attended by only male members of the royal family, in accordance with his wishes.

The Bulawayo-born princess was seated diagonally behind President Cyril Ramaphosa who will deliver the eulogy.

After hearing of his death, the former Olympic swimmer said: “King Goodwill Zwelithini was an honourable man with a pure heart. We shared many special moments over the years, which I will forever hold dear to me.

“I will miss my friend and pray that the Zulu royal family finds solace and comfort during this time.”

Dozens of people, including dignitaries and political heads from neighbouring countries, streamed into the grounds of the palace, where an elaborate marquee was set up for the service.

It featured a huge backdrop with pictures of the late Zulu monarch and bouquets of flowers in front of rows of socially distanced leather chairs near the podium for VIP guests.

Among the speakers are traditional prime minister to the king Mangosuthu Buthelezi and KZN premier Sihle Zikalala.

May your soul rest in eternal peace 🕊

Maidens, who often regard the king as a father, bore white flags with messages of love and gratitude for the role he played in shaping their lives

While the Zulu nation is reeling at the loss of a man who has been custodian of their culture and traditions for close to five decades, the mood outside KwaKhethomthandayo was celebratory.

The only signal of loss of life in the Zulu nation were lit candles, held by the maidens.

The privacy that surrounded parts of King Goodwill Zwelithini’s burial on Wednesday was normal protocol in how a king ought to be laid to rest as the ...
News
1 month ago

A memorial service for the late Zulu monarch King Goodwill Zwelithini will be held on Thursday.
News
1 month ago

The Zulu monarch, who died last week, was buried on Wednesday at KwaNongoma, his ancestral home
News
1 month ago
Next Article