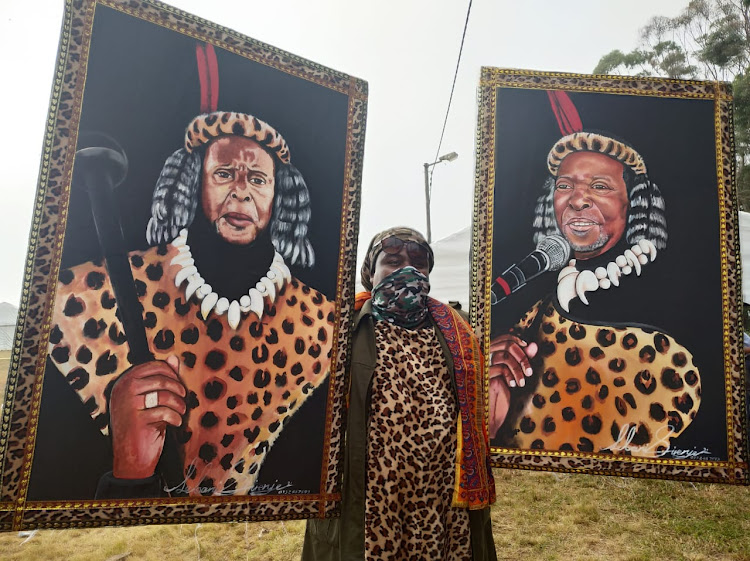 Controversial artist Lebani “Rasta” Sirenje said he braved threats on his life to visit KwaZulu-Natal and pay tribute to the late Zulu monarch King Goodwill Zwelithini with his two portraits on Thursday.

The king died in a Durban hospital on Friday from a Covid-19 related illness.

Speaking to TimesLIVE outside the KwaKhethomthandayo Palace in Nongoma, Rasta said that he started painting on Saturday and worked until he finished the two paintings on Tuesday.

“We learnt about King Goodwill Zwelithini when we were still in school so for me, the history is still on with the king. So it's very significant to me as an African.”

He said he had painted two portraits of the king because he wanted to present one to the royal family and to keep the second one to exhibit and possibly sell at a later stage.

Artist Rasta says he was a bit intimidated to come to KwaNongoma due to threatening commentary on social media #KingGoodwillZwelithini @TimesLIVE pic.twitter.com/9pdnXvNSVP

He hasn't decided which one he will present to the family.

“He allowed me to be brave to come all the way from JHB. People were threatening me [on social media] in a way that I was scared to come to KZN, but I managed to say this is what I do, this is what I love and this is how I celebrate the legend who has passed on.”

Hundreds of people have gathered at the palace, many without masks, to pay their final respects to the late monarch.

This comes despite traditional prime minister to the late amaZulu king Mangosuthu Buthelezi pleading with mourners not to travel to Nongoma, stressing that funerals were known Covid-19 super-spreader events.

“It unconscionable to allow His Majesty's passing to become the cause of further deaths among His Majesty's people. It has therefore been necessary to take the difficult decision for the late King not to be laid in state,” he said.

President Cyril Ramaphosa will deliver the eulogy at an official memorial service on Thursday.

President Cyril Ramaphosa delivered a touching eulogy on March 18 2021 honouring the late AmaZulu King Goodwill Zwelithini, who has been laid to rest at KwaNongoma in northern KwaZulu-Natal. King Zwelithini died from complications related to the Covid-19 virus on March 13 2021.

Eskom said it would suspend load-shedding between 10am and 2pm on Thursday to allow SA to mourn the death of Zulu King Goodwill Zwelithini.
News
7 months ago

The will of the late Zulu monarch King Goodwill Zwelithini will be read after his memorial service, which is due to take place on Thursday, Prince ...
News
7 months ago