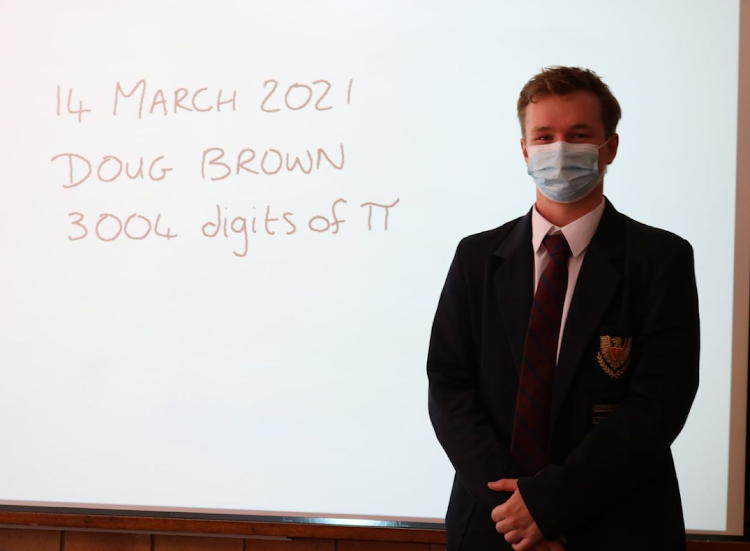 According to the SA Maths Foundation, Pi Day is observed internationally on March 14. It is a day to celebrate the mathematical constant (Π). Pi is defined as the mathematical ratio of a circle's circumference to its diameter. It is a trillion digit ratio rounded off to 3.14.

“The endeavour took about 45 minutes of deep concentration, breaking the SA record of 1,500 digits but also the African record of 2,086 digits.”

“Reciting digits of pi also gives the boys a sense of the infinite and the special nature of irrational numbers,” said Dr Stephen Sproule, head of mathematics at St John’s College.

“It is quite exceptional. Recalling just a few hundred is a lot of work but recalling over 1,000 requires special memory techniques and a lot of time practising the recall process,” he said.

“Since grade 8, Doug has steadily added about 600 digits to his list each year. Last year he managed about 2,300 digits but this took place the weekend before schools were shut at the onset of the Covid-19 pandemic, and nothing came of his achievement,” said the school.

His record-breaking win was witnessed by four adjudicators and the recitation was recorded. The school has submitted his achievement to the pi world ranking list.

'The win was no surprise'

“I knew I would break the SA record as I could comfortably get 2,400, the rest was a bonus. I was actually not aware of the Africa record — so amazed that I broke that too.

On future plans, Doug said: “I'm done with pi now. If anything, I will go for grandmaster memory where you have to memorise a deck of cards in two minutes, 1,000 random digits in an hour, and 10 decks of cards in one hour, all using Major System in relation to the Room Method.”

SA mentalist and memory expert Michael Abrahamson took on the Pi Challenge in 2019 and recited 1,500 digits in 4 minutes and 7 seconds.

They are all listed in the pi world record list.

Nigeria is the world's best team at Scrabble; SA aims to attract young players to the game

Grooming talent from school level has paid off for Nigeria, which has taken the Best Team trophy at the World Scrabble Championship in Goa, India
News
2 years ago

Stellenbosch University (SU) will confer honorary doctorates upon six outstanding individuals who have made valuable contributions in the fields of ...
News
1 year ago