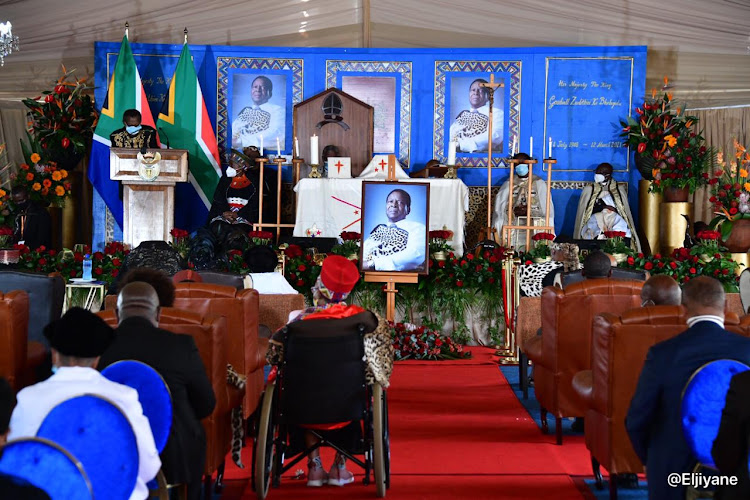 The podium and backdrop at the marquee for the memorial service of the late Zulu monarch, King Goodwill Zwelithini.
Image: Elmond Jiyane

The late King Goodwill Zwelithini was a man of unity who led by example, said AmaZulu prime minister Mangosuthu Buthelezi.

Buthelezi was paying tribute to the late king at his memorial service at the KwaKhethomthandayo Royal Palace on Thursday.

The king was buried in the early hours of Thursday at a non-disclosed burial site, after his death last Friday due to Covid-19-related complications.

He was granted longevity

“Among all our kings, His Majesty’s reign was the longest. God granted him longevity and we reaped the rewards. God also granted him wisdom, compassion, foresight and courage.”

He carried this burden

“His Majesty became the repository of the full history of our people. All our traditions, culture, indigenous knowledge, systems of governance and social structures are expressed through our monarch. He carried this burden with dignity.”

“Long before Covid-19, our King championed the fight against HIV/Aids, reinstating some of our cultural practices and ceremonies. His Majesty, in other words, saved lives.”

He led by example

“What he spoke, he also did. When he told us to till our lands and plant our fields, he led by example. He told us to produce food so our families would be fed and our communities survive. This showed great foresight, in the gathering storm of economic crisis.

His reign fed the Zulu kingdom

“Under his reign, the communal land of the Zulu kingdom has fed and nurtured us. He fought for this security and as the servant of my king, I will continue the fight. Through him, traditional leadership remained strong, even under attack.”

The privacy that surrounded parts of King Goodwill Zwelithini’s burial on Wednesday was normal protocol in how a king ought to be laid to rest as the ...
News
1 year ago

King Goodwill Zwelithini would have been laid to rest in a seated position, adorned in animal skins, with maize seeds and traditional beer among ...
News
1 year ago