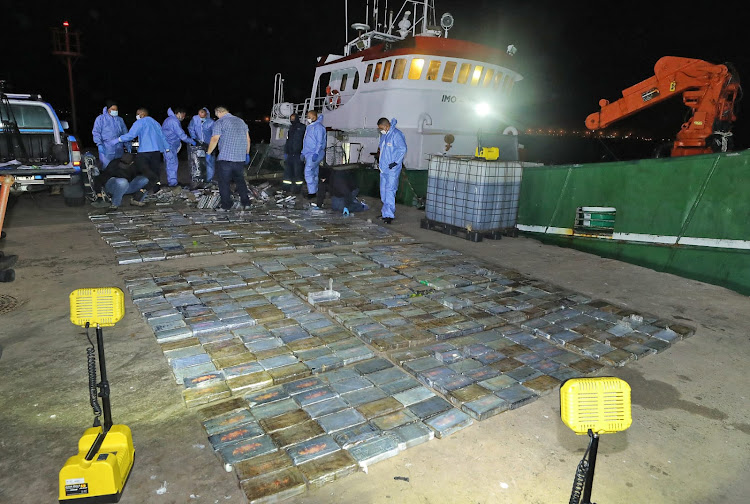 Ten people were arrested after police seized nearly 1,000 bricks of cocaine worth R583m on a fishing vessel off the Saldanha coast in the Western Cape.
Image: SAPS

Ten foreign nationals accused of smuggling nearly a tonne of cocaine into SA on a ship did not apply for bail on Tuesday, instead opting for their case to be transferred to the regional court in Cape Town.

Bulgarian and Burmese interpreters were present in the Vredenburg magistrate's court on Tuesday during the third appearance of the accused, who were arrested in a raid by police special forces and police narcotics unit detectives on a resupply vessel at Saldanha Bay Harbour on March 1.

The accused were allegedly caught with R583m worth of cocaine packed into 973 compressed powder “bricks” each weighing about a kilogram, which were hidden in three compartments in the bow of the ship.

A prosecutor experienced in drug cases has been assigned to the case by the directorate of public prosecutions.

Those in the dock stand accused of smuggling nearly a ton of cocaine into SA aboard a ship.
News
10 months ago

Citing security concerns, the defence counsel had requested that their names not be mentioned by the media and the same courtesy has been afforded to the state prosecutor.

The defence counsel, consisting of two high-profile Cape Town criminal lawyers, requested during the first court appearance on March 4 that the case be postponed until Burmese and Bulgarian interpreters could be made available for the purposes of a bail application.

On Tuesday the prosecution indicated that they were in negotiations with the defence.

The state requested a postponement until April 16 for an appearance in the Cape Town regional court and also to give investigators time to continue with their investigations.

The accused will remain in custody until their next court appearance.

Shady crew and a ton of drugs

The Windward started life in 1974 as a Dutch fishing trawler. Three name changes and 47 years later, she stands accused of smuggling nearly a ton of ...
News
10 months ago

NEWS FEATURE | Into the murky world where the Bulgarian mafia, a Cape ship and a R600m cocaine haul collide

Four Bulgarians and six Myanmar nationals filled the dock in the Vredenburg magistrate's court on Thursday after they were arrested this week in ...
News
10 months ago

A law-enforcement tactical team found 973 blocks of compressed cocaine in three compartments of the vessel.
News
10 months ago