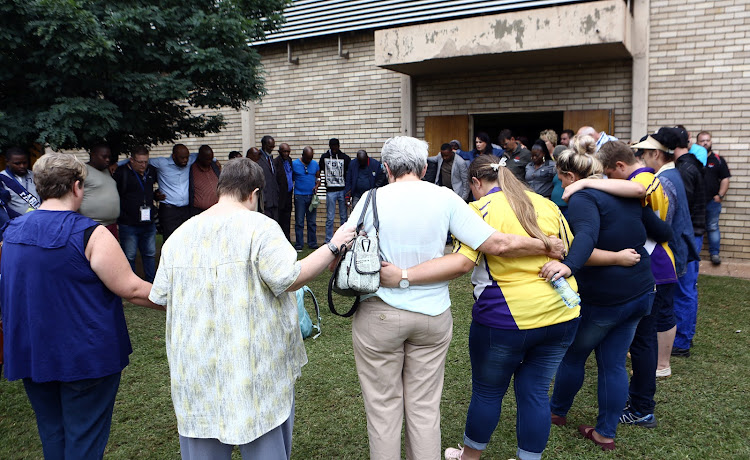 Parents at Hoërskool Driehoek in Vanderbijlpark pray after four pupils died and 20 were injured when a walkway collapsed. File photo.
Image: Masi Losi

A court does not enjoy the power not to decide a case that is properly brought before it, nor may it declare its own proceedings to be a nullity.

The Supreme Court of Appeal made this finding on Wednesday as it sent a hate speech application back to the Equality Court in Johannesburg to be finalised.

The Equality Court, sitting in the high court in Johannesburg in 2019, heard a complaint by the union Solidarity against two BLF members, Lindsay Maasdorp and Zwelakhe Dubasi, after the death of four white pupils at Driehoek Hoërskool in Vanderbijlpark in February 2019.

A walkway bridge collapsed at the school, causing the deaths and injuring 20 other pupils.

Maasdorp appeared to be celebrating the deaths when asked to comment by a newspaper. Solidarity sought an order declaring that the comments constituted hate speech and were an affront to human dignity and white people in general.

The union also sought the payment of damages to the families of the children.

The matter was heard by judge Ratha Mokgoatlheng and opposed by the BLF.

Mokgoatlheng had prepared a judgment that was due to be handed down on December 3 2019.

On the day judgment was to be passed, the judge requested the parties address him on the effect of a Supreme Court of Appeal (SCA) judgment in Qwelane v SAHRC — delivered on November 29 2019 — and which held that a section of the Equality Act was unconstitutional.

The Qwelane matter was subsequently appealed to the Constitutional Court and its judgment is awaited.

In the judgment Mokgoatlheng had prepared, he declared that the utterances by BLF members constituted hate speech. He also interdicted and restrained the BLF members from repeating, posting or publishing the comments.

But Mokgoatlheng then declared the proceedings and the judgment a nullity on December 3 2019.

On the top page of the judgment, an inscription by the judge read: “The judgment is a nullity in view of the SCA judgment in the Jonathan Dubula Qwelane case no 686/2018”.

This prompted Solidarity to appeal against that declaration by the judge to the SCA.

In its judgment passed on Wednesday, the SCA said the high court simply failed to discharge its primary function.

“The order that it issued declared the proceedings a nullity, and hence declined to determine the dispute before the court,” judge of appeal Caroline Nicholls said in a judgment where four other judges concurred.

She said rendering its own “judgment” a nullity left the parties without a binding decision.

“A court does not enjoy the power not to decide a case that is properly brought before it. Nor may a court declare its own proceedings to be a nullity,” she said.

Nicholls said the matter must be remitted to the court which heard the case to enable the dispute that was properly before it to be finally resolved.

“The judge had been addressed in argument by both parties, whereafter judgment had been reserved. All that remained was for the judge to deliver his judgment. That is where the proceedings must recommence.”

Judge ruled the utterances were hate speech, but then pronounced his own judgment to be ‘a nullity’
News
6 months ago

The number of prominent figures paying former president Jacob Zuma a visit at his Nkandla homestead in KwaZulu-Natal continues to grow.
Politics
4 months ago

'What circus is this, really?': Andile Mngxitama fumes after being implicated at Zondo commission

An unnamed witness, an operative of the State Security Agency (SSA), is expected to implicate Mngxitama in corruption, fraud and money laundering.
Politics
6 months ago