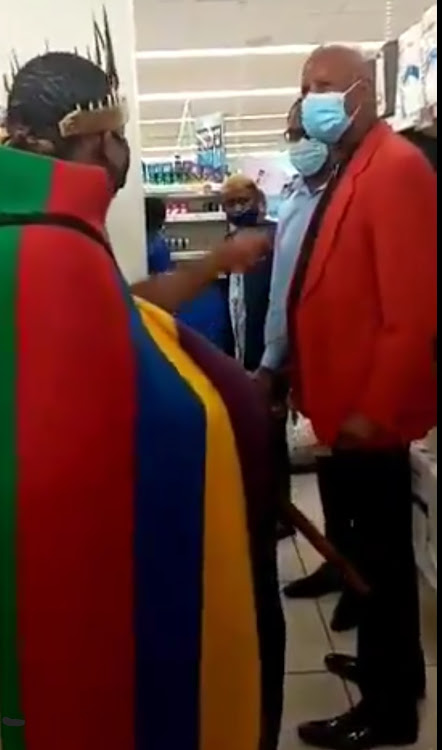 Cultural activist Thando Mahlangu can be seen in this picture being told to leave the mall due to his traditional attire.

A casual trip to a Midrand mall on Wednesday turned into a nightmare when Ndebele activist and author Thando Mahlangu was allegedly hounded out of the shopping complex by a man who described himself as the mall owner.

His sin, apparently, was that he went into the Boulders shopping centre wearing Ndebele traditional attire.

The incident was captured by his girlfriend and business partner Nqobile Masuku on her cellphone.

In the video clip, the man tells Mahlangu that there is a right of admission and that he doesn't condone Mahlangu's outfit and he must leave.

“You are telling me I'm not supposed to wear African [clothes] in Africa,” Mahlangu says.

“I'm saying this is a public place ... I'm not allowing that here, this is my mall ... right of admission is reserved,” the man responds.

Mahlangu's girlfriend can be heard telling the man that “this is Africa then you can't tell someone what to do, what to wear at which mall”.

Saddest reality in Africa, I was subjected to inside the @Clicks_SA store at The Boulders Shopping Center. By the center manager, who said it was his shopping complex. I was told that I'm wearing inappropriate I must go & Omega risk solutions harassed me #NdebeleTwitter pic.twitter.com/klzmTQspJO

In an interview with SowetanLIVE, Mahlangu said he and Masuku had gone to the mall to shop for toiletries and have lunch when the incident happened.

“When we entered the mall we noticed a security guard staring at us.

“As soon as we walked into a Clicks store, the guard came to us and told me that I was not welcome at the mall because I was harassing customers with my attire,” Mahlangu said.

“The guard told me I was merely wearing an underwear and this was chasing away customers, and due to this I was not allowed to buy at the mall. I refused to leave and I told the security guard to call the person who instructed him that he must tell me to leave the mall.

“About two minutes later, the man who identified himself as the owner of the mall arrived. He started telling me to get out of the mall, but still I refused. We had exchanged words with the mall owner which resulted in him ordering the security to use his walkie talkie to call for reinforcement of three more guards.”

He said when the guards arrived he started retreating as he realised they were going to overpower him.

“My partner and I hurriedly bought half of the items we were looking for. I am grateful that Clicks store did allow us to buy the items. However, I am disappointed that my girlfriend and I didn't have lunch at the mall, especially because we were hungry, due to the harassment,” Mahlangu said.

“I left the mall heartbroken and even now as we speak, I'm still not fine emotionally.”

The centre management said in a statement: “The Boulders Shopping Centre would like to apologise unreservedly for the incident that took place at Clicks.

“The centre would like to clarify that it does not deny entry based on appearances and clothes. It is unfortunate that the incident that occurred inside Clicks is being viewed as intolerant towards other cultures and clothes.

“We would like to state that based on various complaints received from shoppers the person in question was asked to leave the store as his underwear indecently exposed him.

“We neither had nor have any intentions of hurting or discriminating against anyone on the basis of their cultural beliefs and practices. The exchange in the video does not represent the core beliefs and values of the centre.

“We take this opportunity to once again apologise to those who feel hurt by the incident. The decision was taken in the interests of other shoppers and employees of the mall,” said the centre management.

Two of SA's prime commercial property owners will extend rental relief to struggling tenants this year, in a sign the impact of Covid-19 is far from ...
News
1 year ago

Police seized a pistol from the injured suspect and explosives from the vehicle.
News
1 year ago