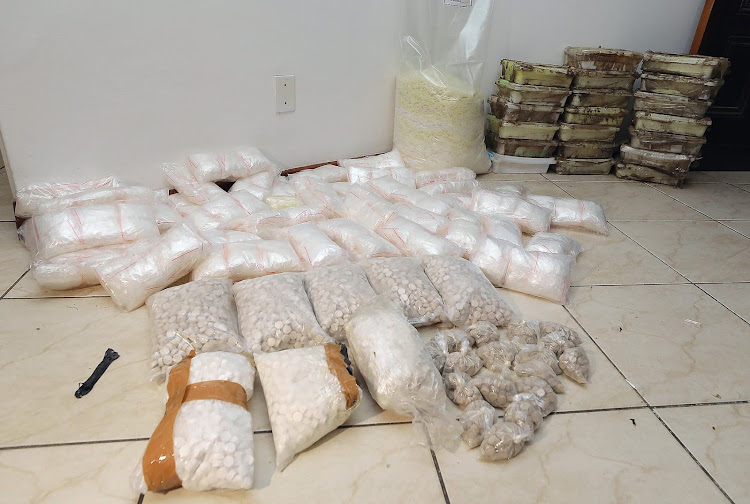 A 40-year-old suspect was arrested at the property in Burcell Street, Tijgerhof.
Image: SAPS

A large quantity of drugs worth millions of rand as well as unlicensed firearms with ammunition were seized at a Milnerton residence on Wednesday afternoon.

A 40-year-old suspect was arrested at the property in Burcell Street, Tijgerhof.

The police seized 52kg of crystal meth estimated at R18.2m, 8,850 Mandrax tablets valued at R442,500 and hydroponic dagga, as well as three pistols and a revolver, 286 rounds of ammunition, 13 magazines and a holster.

The suspect is facing charges relating to dealing in drugs, possession of unlicensed firearms and ammunition. He will appear in court on Friday.

Methcathinone, commonly known as 'cat', chemicals and paraphernalia valued at almost R1.5m was found at a sophisticated manufacturing plant in ...
News
1 year ago

Police spokesperson Brig Novela Potelwa said as the investigation continued, there was a possibility of more suspects being apprehended as well as more charges being laid against the suspect already apprehended.

“Similar operations are set to continue in a bid to create safety within communities.”

According to a new report published by the Global Initiative Against Transnational Organised Crime on Thursday, SA is the biggest crystal meth user in Southern Africa and one of the biggest meth users in the world.

“Meth market price points and supply channels appear to be controlled by a few syndicates. Distribution is strongly territorial in nature, and there is little variation in meth volume and packaging options. One can buy the same meth packaged the same way in almost every national marketplace,” said Eligh in the report titled “A Synthetic Age: The Evolution of Methamphetamine Markets in Eastern and Southern Africa”.

“The regional meth markets appear to function in a quasi-cartel arrangement, with the same few transnational networks controlling most of the production and upper-level regional distribution,” read the report.

“Of the markets analysed here, consumer demand for meth is highest in South Africa but it is increasing in neighbouring markets, particularly because it is beginning to compete as a substitute substance for crack cocaine.

“The SA meth market is the oldest in the region, deeply embedded in society and the most structured of all the regional markets that were researched. SA remains the primary destination market for meth trafficking within the region, but cross-border supply is flowing to all neighbouring countries.”

Drugs worth R6.5m stopped from being shipped to Australia

Police in Gauteng stopped a consignment of drugs worth R6.5m and hidden in statue from being shipped to Australia.
News
1 year ago

NEWS FEATURE | Into the murky world where the Bulgarian mafia, a Cape ship and a R600m cocaine haul collide