COVID-19 WRAP | We are not yet ready to return to normal life, says Ramaphosa 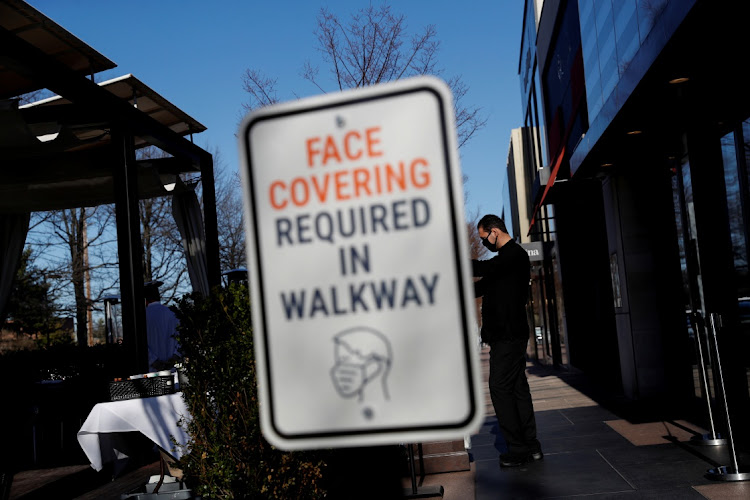 A sign requiring the wearing of a protective face mask is seen as a waiter stands outside a restaurant in Manhasset, New York, US March 29, 2021.
Image: REUTERS/Shannon Stapleton

As President Cyril Ramaphosa announced on Tuesday that SA would remain on level 1 of the current lockdown restrictions, health minister Dr Zweli Mkhize said that were just 756 new Covid-19 cases confirmed in the previous 24 hours.

This means that there have been 1,546,735 total infections recorded to date.

The government has doubled the number of people who will be allowed to attend religious gatherings, but said that strict health protocols would remain in place.

This would affect the Easter weekend, as well Passover and, potentially, the expected start of Ramadan.

President Cyril Ramaphosa said during an address to the nation on Tuesday night that the government had held consultations with faith-based communities to find solutions to the challenges of managing large crowds at religious services.

Many South Africans would have breathed a sign of relief on Tuesday night, as President Cyril Ramaphosa kept the country's Covid-19 restrictions largely unchanged.

In fact, the only significant changes to the current level 1 restrictions were that alcohol sales for off-site consumption would not be allowed for the Easter long weekend, and that capacity for religious gatherings were increased to 250 and 500 for indoor and outdoor events respectively.

Below is his full, unedited address.

IN FULL | Ramaphosa on vaccines, partial booze ban and religious...

SA remains on level 1, but no off-site booze sales for Easter weekend

Alcohol will not be allowed for off-site consumption over the Easter weekend, President Cyril Ramaphosa said on Monday night.

He also announced that the country would remain on level 1 lockdown,   albeit with “a few adjustments”.

He said the tightened restrictions on alcohol were necessitated by “the role of alcohol in fuelling reckless behaviour”.

SA remains on level 1, but no off-site booze sales for Easter weekend

Despite delays, Mkhize adamant that SA's vaccine programme is on track

While there may be delays in the rollout of the country's vaccination programme, health minister Zweli Mkhize on Tuesday assured South Africans that the government's plans were on track.

He was updating the parliament's portfolio committee on health on the Johnson & Johnson clinical trials, vaccine procurement and progress on the country's vaccination programme.

Despite delays, Mkhize adamant that SA's vaccine programme is on track

EFF leader Julius Malema has made an impassioned plea to President Cyril Ramaphosa to immediately ban alcohol sales ahead of the Easter weekend.

This comes as Ramaphosa is due to address the nation at 7.30pm on Tuesday.

Malema insinuated that alcohol was a contributing factor to many of SA’s problems, and suggested that if sales were banned until next Tuesday, there would be less damage.

The association said on Tuesday this followed confirmation at an industry meeting with officials from the department of trade, industry and competition on Monday that the national coronavirus command council (NCCC) would recommend a ban on alcohol sales for up to 11 days, starting at the Easter weekend.

President Cyril Ramaphosa will address the nation on developments regarding the country’s response to the Covid-19 pandemic at 7.30pm on Tuesday.

The address was originally scheduled for 7pm but it was pushed forward by 30 minutes “to allow SABC viewers to watch veteran newsreader Noxolo Grootboom’s final bulletin as she retires after 37 years”, the presidency said.

While the nation awaits a government decision about Covid-19 regulations over Easter, many people have already booked flights and accommodation for the long weekend.

Half a million people lost their jobs in 2020, says Stats SA — and earnings are down too

More than 500,000 people lost their jobs between December 2019 and December 2020 when the country underwent different levels of lockdown due to the coronavirus pandemic.

When Mbali Mbatha went into a coma, it was still 2020 and doctors at Johannesburg's Netcare Milpark Hospital had just removed her baby Kuhle after only 30 weeks of pregnancy through an emergency C-section operation.

The ANC’s highest decision-making body between conferences met on the anniversary of the implementation of a nationwide lockdown to contain the spread of the coronavirus.

“The decisive measures taken in the early days of the outbreak of Covid-19 in SA helped to delay the spread of the virus and enabled the preparation of our health facilities for the expected rise in infections,” said President Cyril Ramaphosa.

ANC NEC calls for 'society-wide effort' to ensure success of...

DA MP Phumzile Van Damme has questioned why some South Africans are unwilling to get vaccinated even though the jabs are scientifically proven to be safe.

'What's the problem if it's proven safe?' Phumzile Van Damme on...

SA has secured 30 million Johnson & Johnson one-shot Covid-19 vaccines for use in the country.

This is according to President Cyril Ramaphosa, who made the announcement on Monday during an oversight visit to the Aspen Pharmacare sterile manufacturing facility in Gqeberha, Eastern Cape.

30 million J&J vaccines secured: Here's what you need to know about...

The City of London financial centre, which has resembled a ghost town since the coronavirus swept the world last year, is likely to see most workers return to their offices after the pandemic, the City’s political leader said.

Catherine McGuinness, policy chair at the City of London Corporation, told BBC radio she was confident that trade would return for the cafes, pubs, restaurants and other businesses that rely on the usually teeming crowds of office workers.

But there would probably be changes to the way people work as a result of the pandemic.

"What people are telling us is that they are expecting their central office base to remain at the core of their business with people coming in three or four days, working different hours, so we are expecting the bulk of the return," McGuinness said."

What it will mean in terms of the overall footfall, we are not yet quite clear."

London dominates the world’s $6.6 trillion-a-day foreign exchange market, it is the biggest centre for international banking and the second largest fintech hub in the world after the United States.

McGuinness said developers were revving up plans for new buildings in the City, home to the giants of world finance.

"We're already seeing in our planning applications a real surge of interest in getting office space in the City," she said. "I think (we have seen) so far this year 80% of all the applications we saw last year," she said.

"So, continued interest and continued commitment to that office space, but a different way of using it."

China carried out about 4.3 million vaccinations against Covid-19 on March 29, bringing the total number administered to 110.96 million, according to data released by the National Health Commission on Tuesday.

Brazil’s health system is buckling under a growing number of Covid-19 patents needing intensive care. Across the country there are over 6,000 people waiting for an ICU bed, according to government data, and many are dying waiting in line.

Britain will focus on vaccinating the whole of its adult population before it can to provide any surplus shots to other countries such as its close neighbour Ireland, British business minister Kwasi Kwarteng said on Tuesday.

More than 30 million Britons have received their first Covid-19 shots in the fastest vaccine rollout in Europe, with the aim of offering shots to all adults by the end of July.

However, Britain has found itself involved in a public spat with the European Union, where the vaccination programme has been much slower, over the supply of doses.

"I think our focus has to be to try and keep Britain safe, we want to work cooperatively as well with other countries but the main priority is to get the vaccine rollout," Kwarteng told Sky News.

He said Britain was working with European nations to try to ensure their populations were vaccinated, and that it was not "a competitive situation".

However, asked if Britain might be able to help out Ireland, he said: "If there are surplus vaccine doses then we can share them but there are no surpluses at the moment, we have still got a huge number to vaccinate.

Palestinians on Monday received 100,000 doses of Sinopharm Covid-19 vaccine donated by China to help broaden an initial campaign to vaccinate medical staff, the elderly and the chronically ill.

Palestinian health authorities have been mounting a limited vaccination drive among the 5.2 million people living in the Israel-occupied West Bank and Gaza, using vaccines provided by Israel, Russia, the United Arab Emirates and the global COVAX vaccine-sharing initiative.

So far, more than 69,000 Palestinians have received their first dose of the vaccine, and around 7,600 people have had both shots, according to a health ministry statement.

Israel has come under international criticism for not doing more to enable Palestinians living in areas it occupies to be inoculated, while its national vaccination drive has been one of the fastest and most efficient in the world.

It says it has vaccinated more than 100,000 Palestinian workers with permits to enter the country or Jewish settlements in the West Bank but that the Palestinian Authority bears overall responsibility for inoculations in self-rule areas.

After the arrival of the Chinese shipment, Palestinian Health minister Mai Al-Kaila said in the West Bank city of Ramallah that recent restrictions such as curfews and weekend lockdowns had helped to relieve pressure on crowded hospitals.

"We will continue (vaccinating) our medical staff in the clinics for the public sector and the private sector, dentists and pharmacists, (and) for other categories that have immediate contact with the population," Kaila told Reuters.

A real-world study by the CDC revealed that the Covid-19 vaccines developed by Pfizer with BioNTech and Moderna are highly effective and reduced the risk of infection by 80% two weeks or more after the first of two shots.

Regulator says no green light yet for ivermectin, while AfriForum claims victory in court case for drug's use

AfriForum says settlement reached in court case over the controversial drug, meaning it is 'now accessible and available on doctor's prescription'

Regulator says no green light yet for ivermectin, while AfriForum...

US boosts vaccines, but warns of 'impending doom'

US officials pleaded with Americans on Monday to take precautions to prevent the spread of Covid-19 amid an increase in cases across the country, as President Joe Biden announced more Americans would be eligible to be vaccinated soon.

Medical aid scheme Discovery has set out an ambitious target to vaccinate three million members when SA begins its second phase of the vaccine rollout in May, company CEO Adrian Gore told beneficiaries in an e-mail on Friday.

#COVID19 UPDATE: A total of 16 123 tests were conducted in the last 24 hrs, with 548 new cases, which represents a 3% positivity rate. A further 47 #COVID19 related deaths have been reported, bringing total fatalities to 52 710 to date. Read more here: https://t.co/sQNLIpxoBE pic.twitter.com/eNb4fnCmsG