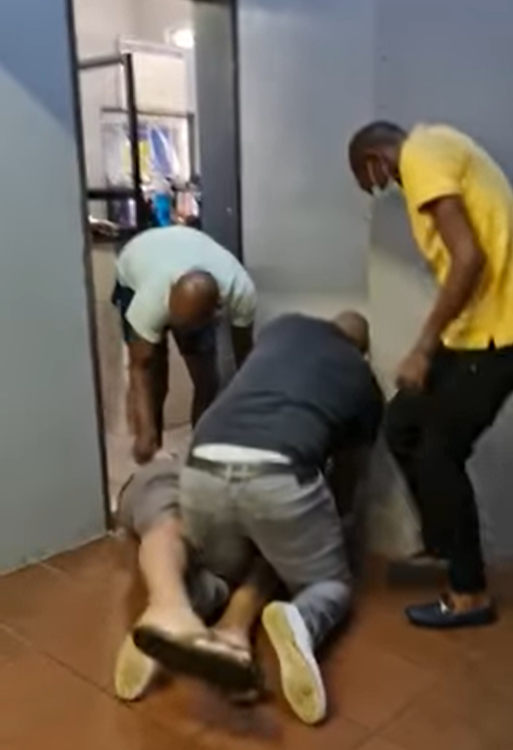 A man was assaulted inside the White River police station in Mpumalanga as police officers allegedly looked on and didn't intervene.
Image: Delia Human via Facebook

An investigation has been launched after Mpumalanga cops allegedly failed to act as a man was assaulted inside a White River police station.

Jacques Meiring, the owner of Divergent Ops, said that his client, Delia Human, and her fiancé were attacked, allegedly by members of another security company after they were followed by a convoy of vehicles which tried to ram them off the road.

He said that police officers ordered his officers to stand down and not intervene as the man was assaulted — adding that they had to do so as they could not step in on what is police jurisdiction and defy an official police order.

Police spokesperson Brig Leonard Hlathi said on Monday that the incident was “unfortunate and shows lawlessness on the part of the individuals involved, as a police station is not a battleground”.

He said the incident was under investigation, and that the Independent Police Investigative Directorate (Ipid) had been notified.

A man who claimed to be a co-owner of the company said he would respond to a request for comment, but he had not done so by Monday night.

Meiring said his security officers were instructed by police not to intervene in the attack. He said that all they could do was watch as the man was attacked and his cellphone, containing video footage of the convoy’s alleged reckless driving, was destroyed. Large parts of the incidents, both on the road and at the police station, were captured in cellphone footage.

According to a Facebook post by Human, the ordeal started on Sunday as the couple left their farm to buy groceries in White River. She said she posted the information publicly for her own protection after legal advice, as they were threatened throughout the ordeal, with their attackers allegedly claiming they would track them down and kill them.

She said they were driving along the R40 towards White River, near the White River Country Club Estate, at 10.16am when several vehicles started overtaking them on the single road, pushing them and other vehicles to the side.

“At this point my fiancé, Barend, told me to take his phone and start recording them as they were driving very dangerously and recklessly. I proceeded to record them using his iPhone,” she said in the Facebook post.

The Independent Police Investigative Directorate says it has taken over a crime scene in Dennilton, Limpopo, where a police officer allegedly shot ...
News
9 months ago

She said that as they approached a traffic circle they were “basically surrounded” by the vehicles after a black Range Rover with no registration plates suddenly stopped in front of them.

When her fiancé hooted at the car the driver got out, pulled out a firearm and walked towards the driver's side of their vehicle.

“My fiancé was keeping an eye on the man with the firearm, telling me to get down low as he was concerned the man would shoot. Then the other man, approaching from our rear, swung a large, concrete divider at the drivers' side window, smashing it instantly,” said Human.

She said her fiancé then reversed the vehicle to get out of the situation and smashed into the vehicle which was blocking them from behind, before going off-road and driving through traffic barriers.

She said they were chased by several cars, including a white VW with company branding.

“We managed to get to the police station and ran inside. I shouted for help and told the police we were being chased by armed men,” she said.

She said the police officers took them into the radio room, from where they could see what was happening outside and from where they had a full view of their vehicle, which still had their dog inside.

She said Barend was recording on his phone throughout.

Then, she said, the men “gathered outside the police station”.

Mthokozisi Ntumba's postmortem confirmed that he died of a firearm injury to the chest, according to an affidavit from an Ipid investigator.
News
9 months ago

“ “Some of them stayed outside and surrounded our vehicle and others came inside the police station, telling the  police to 'let us out', and that they wanted our cellphones. We felt that our lives were in danger. I could not understand how nothing was being done to these men who had already pulled firearms on us,” said Human.

She said the police were not happy with Barend recording videos inside the police station.

She said they were told by a warrant officer to give their phones to the men but they refused, saying it was their right to record the incident.

She said that one of the men then pushed his way into the control room, and addressed her fiancé by his full name and used his full address — “telling us they will come for us”.

“This was done in full view and earshot of multiple police officers while my fiancé was recording everything with his cellphone,” she said.

“We felt threatened the entire time. All the police did was threaten to take our phones, telling us repeatedly to hand our phones over to them and the men. We refused,” she said.

Meiring said Human contacted his control room, and he sent members to observe the incident taking place inside the police station.

“We couldn’t go and interfere in a case where the police are involved, because then it’s obstruction of justice,” said Meiring.

Human said that when Barend went outside he saw that the men were “now intimidating our friend, trying to prevent him from helping us with our dog”.

She said none of the police officers tried to stop the men from entering the station.

“My fiancé was assaulted by four men, in full view of police officers, inside the White River police station. Some of these men were armed, with firearms,” she said.

She said the men eventually took Barend’s phone and smashed it before taking it — again in full view of the police officers.

By this time Meiring had also arrived at the police station.

Meiring said he had to ask Human and Barend to co-operate with the police and complete crash reports and statements about what had taken place. He said an advocate was already at the premises on the couple’s behalf.

A 50-year-old woman was shot dead and her teenage daughter injured when a man held them captive in a Limpopo house at the weekend.
News
9 months ago

He said there was friction between the couple and the police officers as the couple, feeling ill-treated, vented at the cops. He said he spoke to police to try to iron out the friction and tensions.

He said when his security officers tried to get involved, police instructed them to stand back. His officers can be seen in one of the videos standing and watching as Barend is assaulted.

“The police asked us not to get involved there. We immediately stood down. Unfortunately now it looks like we didn’t do anything, but our hands were tied, and there was a risk that they would also be arrested if they were involved.

He said they had spoken to the police and were told a team of independent investigators was being set up to investigate the claims.

Hlathi said that the conduct of those involved in the physical fight was “unacceptable”.

“The man who appears on the video seen being pressed down [Barend] to the ground is urged to register a criminal case for investigation purposes,” said Hlathi.

“The district commissioner of Ehlanzeni, Maj-Gen Dianah Mashele, has urgently attended to the matter and established a team to probe the matter.

“An enquiry has been opened and a  criminal case of malicious damage to property and crimen injuria has been opened against the man who was [assaulted] as he is accused of colliding with a certain vehicle and allegedly uttered racial slurs,” he added.