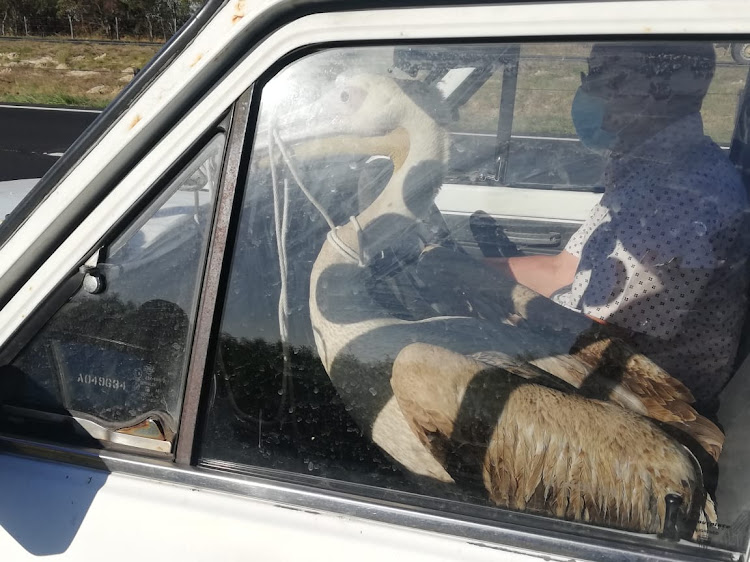 The pelican that caused all the trouble gets a front-seat drive to safety after it was captured on Cape Town's N7 highway on Tuesday.
Image: City of Cape Town

A pelican brought the N7 highway towards Atlantis to a practical standstill on Tuesday as Cape Town law enforcement officers intervened to help nature conservation officials capture the bird.

The officers were driving when they spotted the conservation officials trying to catch the bird.

“The officers managed to safely capture the feisty bird, whose beak threatened to send a serious message to anyone who got too close,” said City of Cape Town mayoral committee member for safety and security JP Smith. 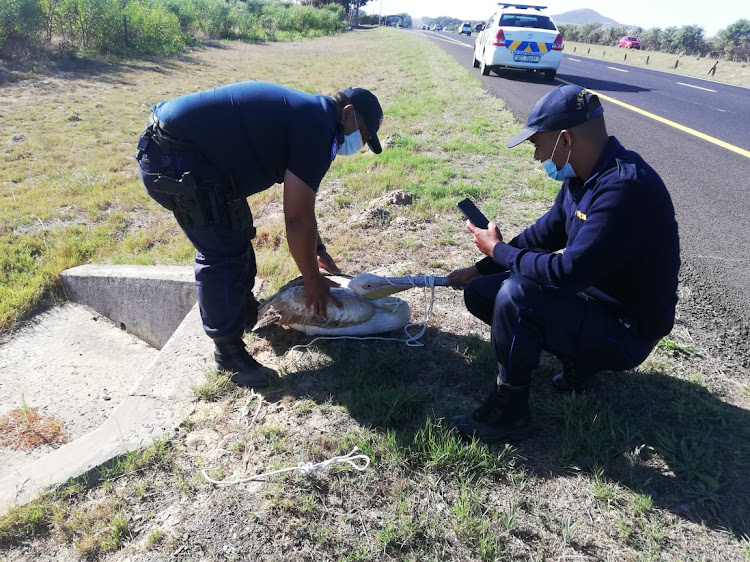 A city official holds on to the pelican's beak, a weapon it was willing to use against its captors.
Image: City of Cape Town

Earlier on Tuesday, law enforcement officers spotted a group of youths involved in a dog fight on the R300 highway near Heinz Park. Smith said the officers stopped the fight and one suspect and his dog managed to make a quick getaway.

The other suspect involved in the dog fight, however, did not get away from the scene but was considered by the officers to have diminished responsibility due to his age.

“His mother was issued with a fine of R2,500 and the dog, which was a pit bull breed, was impounded. The dog sustained minor injuries from the fight but will receive medical care,” said Smith.

The city’s recently launched law enforcement “animal unit” held a joint operation with the Society of the Prevention of Cruelty to Animals (SPCA) in the Klipheuwel informal settlement on Tuesday.

According to Smith, 15 dogs were surrendered by their owners. Two dogs were taken for sterilisation, and two dogs were impounded due to reported attacks by the animals.

“In Langa, two dogs were impounded and a third dog was impounded for a dog fight complaint. A R2,500 fine was issued for this incident,” said Smith.

On March 11 the city announced the establishment of a team dedicated to tackling dog fighting, a major animal cruelty driver in the Western Cape. 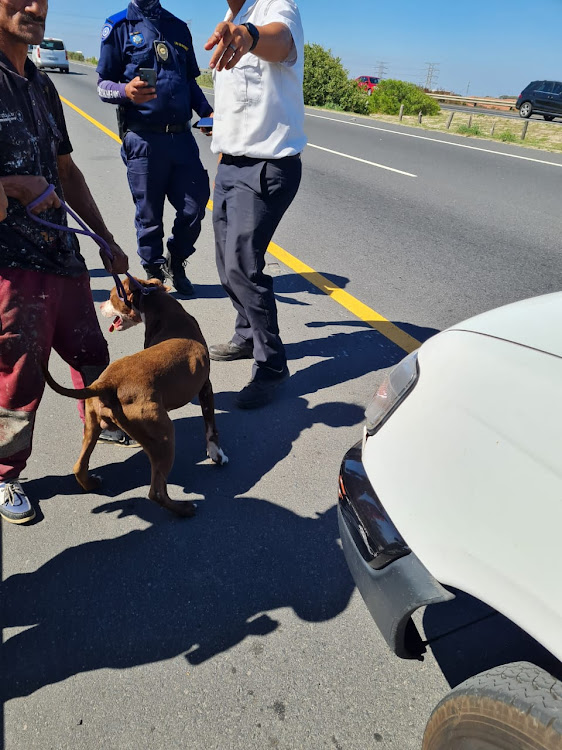 The city said the team has ventured into several hotspots, creating awareness around dog fighting and the responsibilities of dog owners.

By March 11 in Hanover Park, 27 dogs and five cats were surrendered to the team, three dogs and two cats were sterilised and 29 other animals were treated for a number of ailments.

The team’s mandate includes dealing with canine attacks on people and other animals. The team comprises city law enforcement animal control officers, welfare inspectors from the SPCA, and members of the city’s safety and security investigations unit.

“Dog fighting is a real, vicious and barbaric activity which is rife across the metropole. Often the only time this dark issue comes to light is when a resident has enough courage or compassion for the animals involved to call authorities,” said Smith.

“The team has already made inroads,” he said, adding that the team was established after the Cape Animal Welfare Forum told city officials about organised and informal dog fighting in the Western Cape.

“Dog fighting eats away at the moral fabric of society and its devastating effects have long been a priority for the city’s animal control unit. The newly integrated team aims to gather intelligence and information from dog attacks and injured dogs admitted for treatment, with the end goal of successfully prosecuting offenders.

“For too long, these perpetrators have got away with these inhumane crimes. Dog fighting is an underground activity and despite the outcry, it remains in the shadows and draws crowds. If we are going to end these barbaric events, we need the public’s assistance.”

The team will also monitor and patrol identified dog fighting hotspots, scrutinise dogs impounded and those that have been attacked for visible signs of regular or intermittent dog fighting, and monitor cases and prosecution of offenders.

Smith appealed to residents to report dog fighting, saying that the consequences extended far beyond the suffering of animals and had a broad affect on society and especially children who witnessed these brutal fights.

“Children who witness these fights can become desensitised to suffering and pain, it can make them more willing to accept physical violence and they’re less able to empathise with others. This is not the legacy we want,” he said.

An 11-year-old girl is in an East London hospital after she was mauled by a neighbour’s dog.
News
2 months ago

The National Council of SPCAs  (NSPCA) has expressed jubilation at the sentencing of six people to jail for two-and-a-half years each for their ...
News
1 year ago

A 68-year-old Johannesburg man has been arrested for allegedly shooting a neighbour's dog several times.
News
7 months ago
Next Article