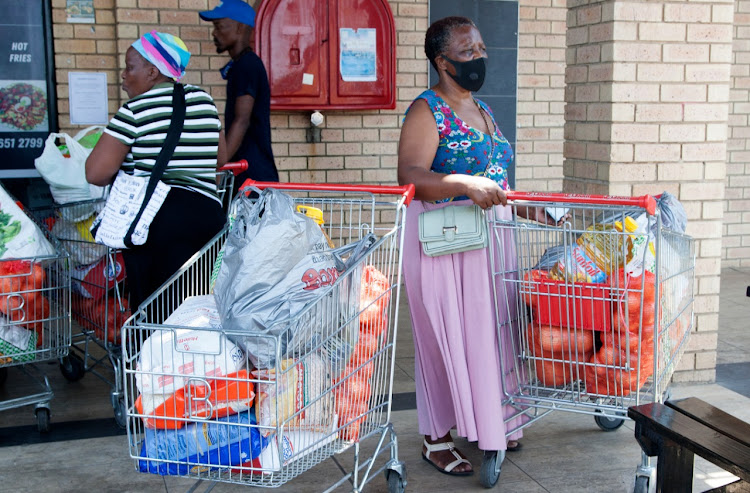 South Africans, who are struggling to keep their heads above water, are forking out more for a basic food basket compared to seven months ago.
Image: Khaya Ngwenya

South Africans are paying nearly 5% more for a basic food basket compared to seven months ago.

This is according to the latest Household Affordability Index, compiled by the Pietermaritzburg Economic Justice and Dignity Group, which tracks food prices in 44 supermarkets and 30 in Johannesburg, Durban, Cape Town, Pietermaritzburg and Springbok.

“The higher NMW still falls far short of anything close to a living wage, and workers will continue to sacrifice nutrition and take on debt to cover wage shortfalls.

“We expect that this upward trend in food prices is likely to continue,” said the group’s programme co-ordinator Mervyn Abrahams.

He said the R10 increase in the child support grant to R460, which comes into effect in April, was inadequate.

“Not ensuring that mothers are able to feed their children properly is a direct form of everyday violence against women and children.

“We are building a very fragile future on the bellies of millions of hungry children.

“We are now in a situation where South Africans are worse off than they were before March 2020. Jobs continue to be lost. People have less savings, and less money.

“The prices of essential goods and services continue to rise. People will be poorer this year than they were last year. It is unlikely this status quo will change and  we expect that the affordability crisis in households will deteriorate further,” said Abrahams

This is what costs more now from a year ago

The cost of medical services, food and petrol are quantified in a report by Statistics SA.
News
9 months ago

Global agricultural indices typically have to contend with several challenges in the quest to provide a useful measure of any particular subject, ...
Opinion & Analysis
10 months ago