Ntuthuko Shoba didn't see the face of the person who his girlfriend Tshegofatso Pule left with but it appeared that she knew the person, court hears 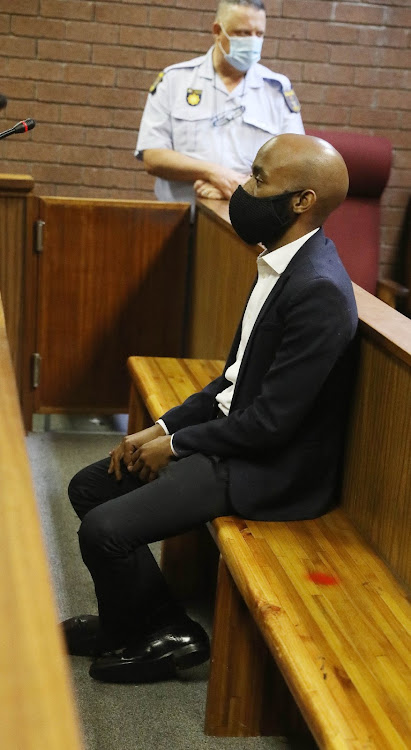 Ntuthuko Shoba said he “felt the need” to help police investigate the disappearance of Tshegofatso Pule, whose murder he is accused of plotting.

Shoba was appearing in the Roodepoort magistrate's court on Tuesday, where he sought to reapply for bail, based on new facts.

He said in an affidavit read out in court that one of Pule's relatives phoned him on June 7 to state that he was at the Florida police station to report that the 28-year-old, who was eight months pregnant, had disappeared.

“I was shocked and worried when I heard this,” he said.

Pule was killed in June 2020, with her body found hanging from a tree.

Shoba has previously applied for bail, but was unsuccessful. At the time, magistrate Delize Smith said he had “not shown that he will stand trial”.

“He relied on an affidavit which states the bare minimum. The interests of justice, especially public interest, is not sufficient why he should be released on bail,” she said.

Shoba was arrested in connection with the June murder after he was implicated by Muzikayise Malephane, who pleaded guilty to the killing.

When Shoba began his new bail application on new facts on March 26, he told the court that Malephane, who was sentenced to 20 years in jail for killing Pule, may have been her baby's father. He said this information was given to him by a fellow awaiting-trial inmate at the Krugersdorp Correctional Centre. He said his cellmate, John Thweky Mohabe, told him that Malephane, who was allocated a cell adjacent to Mohabe’s, had confessed to being Pule’s boyfriend.

When the new application continued on Tuesday, Shoba said that on the day Pule disappeared, someone that she knew had picked her up from his house. He said he did not see the person's face.

After being told that Pule was missing, Shoba said he went to the police station and gave officers all the information he could remember about the vehicle that came to fetch her.

“I felt the need to help police to investigate her disappearance. I informed police that in my complex there are CCTV cameras that may have picked up the vehicle registration numbers,” he said.

Shoba said he asked the CCTV operator to allow the police to view the footage.

“We went with the police to the CCTV room ... there was still footage in the system. I personally remember one of the police members say she left with someone she knew,” he said in the affidavit.

The lawyer of the accused, seeking R2,000 bail, says death threats are circulating on social media and in prison corridors.
News
10 months ago

Shoba said that around 10pm, Pule told him that her transport had arrived and that she needed to go.

“I was surprised that she had called her own ride as she usually asked me to call an Uber for her to take her home. I figured she had made prior arrangements,” he said.

Shoba said he then accompanied her to wait for her ride.

“Her ride arrived. The vehicle was unknown to me and it drove a few metres past us before stopping.”

I was not worried. It was apparent to me she knew the driver.

Shoba said Pule went to the front passenger door and signalled to the driver to open the window.

“I then heard her uttering the following words in Setswana: 'Whose car is this? Look how drunk you are,'" he said.

Shoba said he could not hear the response from the driver, nor see the driver's face.

“She then pulled the door handle and she got inside and left with the unknown vehicle. I was not worried. It was apparent to me she knew the driver,” Shoba said.

Also as part of his new bail application, Shoba said he was financially supporting his 82-year-old grandmother who has numerous illnesses, including a heart problem.

Shoba said he took care of Pule and her unborn child, and that phone records would show that he had sent money to the deceased through “e-wallet” to take care of herself and her unborn baby.

“My mobile records will provide proof. The state has no strong case against me.”

Shoba said his bank statements would show he had purchased items related to her pregnancy.

The bail application will continue on April 22 when the prosecution responds to Shoba's affidavit.

Ntuthuko Shoba, who is accused of ordering the murder of his lover Tshegofatso Pule when she was eight months pregnant, will reapply for bail on ...
News
10 months ago

Ntuthuko Shoba remains in custody pending his next court appearance on March 25, for the indictment to be transferred to the high court.
News
10 months ago