Church leaders gather in support of Durban victims of xenophobia 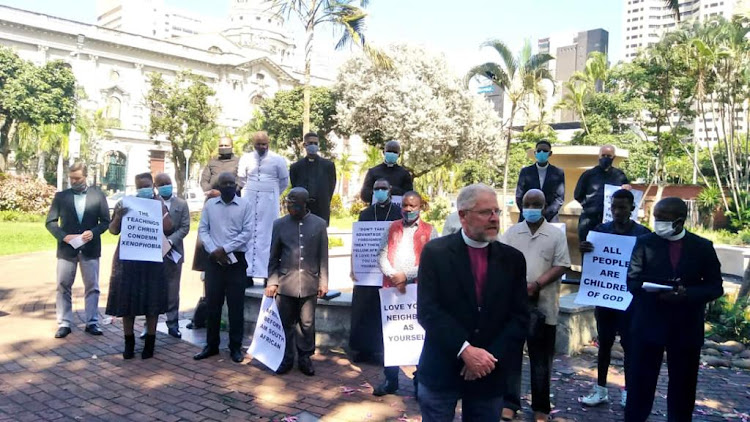 KwaZulu-Natal church leaders gathered in the Durban CBD on Thursday to lead a silent protest in unity with all foreign nationals affected by xenophobic attacks in the province.

The gathering of about 50 people held at the Medwood Gardens follows numerous violent attacks against foreigners trading in KZN.

Bishop Bheki Buthelezi, board member of the KwaZulu-Natal region Christian Council (KZNCC), said the meeting was long overdue and that the council has growing concerns about the attacks on foreigners.

“We are here as the church leaders of KZN to stand in solidarity with our foreign brothers who are living in our land. We have been concerned for some time about the attacks that have been directed at them. In 2019 we had a similar incident, but now we have decided to ask for solidarity with them — to ask for calm and tolerance among our people.

“We were also once treated as foreigners in our own land during apartheid times, so we feel bad when South Africans do the same thing to our foreign brothers and sisters,” he said.

Buthelezi addressed allegations that members of the Umkhonto we Sizwe Military Veterans (MKMVA) were behind the attacks on foreign traders in the Durban CBD.

“We have heard of the allegations that the MKMVA are behind the attacks. We took it upon ourselves and called a meeting with them where they denied any involvement of their soldiers in these attacks,” said Buthelezi.

Member of the provincial executive committee and former chair of the Tanzania Tourist Board, Thanduyise Chiliza, said it was unbelievable that members of the MKMVA were behind the attacks “because they too are soldiers who have been exiled in African countries in the past”.

Chiliza told TimesLIVE that the MKMVA members were not behind the attacks in the city. He believed that the perpetrators were former MKMVA members who may have been disqualified, for various reasons, from the military in the past.

“Now they find themselves roaming around without jobs and qualifications because they did not join the soldiers who went to school. As the PEC in the province we are saying these things must be corrected so that these people do not express their anger by attacking foreigners. We wish that it should be made clear that we are not in agreement with what they are doing,” said Chiliza.

Bishop Paul Verryn of the Tsietsi Mashininini Centre in Soweto said that South Africans owe an apology to all foreigners affected by the attacks, which have left scores without jobs, stock or the ability to earn an income.

“All foreigners in this country have great worth, especially in God's eyes and therefore in the eyes of the religious community,” said Verryn.

Immigrant hawkers tell of their terrible ordeals, as church leaders prepare to hold a protest in solidarity with victims
News
8 months ago

EDITORIAL | Our human rights track record, past and present, is dismal