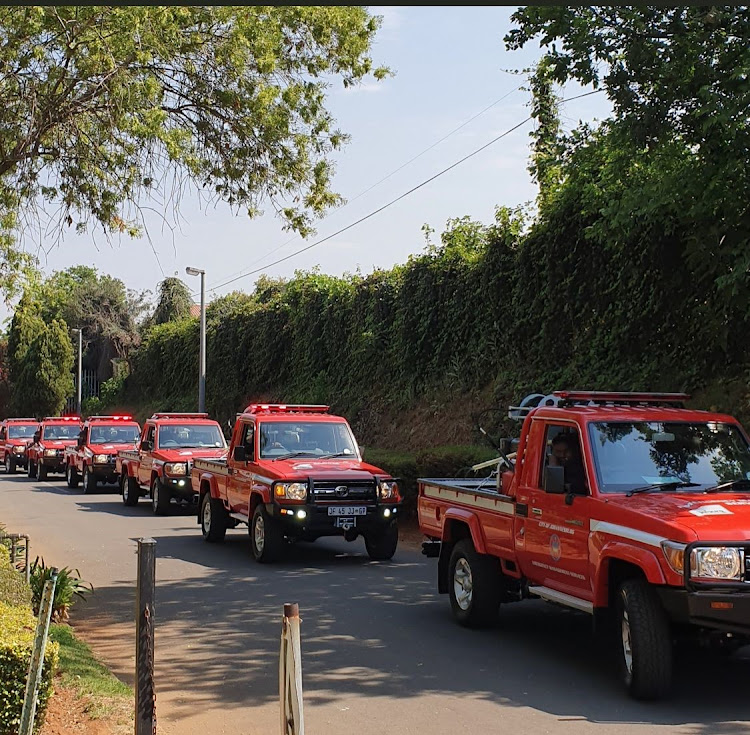 The 15 grass fire units already paid for and delivered to the City of Johannesburg.
Image: supplied

The City of Johannesburg has assured residents that it will move swiftly to procure fire and rescue vehicles - of which there are a shortage - in a legal, transparent and competitive manner.

The high court in Johannesburg this week set aside a tender worth more than R500m awarded to TFM Industries to supply the city with 92 fire and rescue vehicles.

The city, with 5.5 million people spread over 1,645km², has to turn to neighbouring metros for fire-fighting assistance.

Under former mayor Herman Mashaba, the city paid R172m towards fire and rescue vehicles that were not delivered.

City of Johannesburg spokesperson Mlimandlela Ndamase said: “The judgment now opens way for the city to undertake a legal and competitive process in line with s217 of the constitution for the procurement of fire and rescue vehicles to meet the current requirements and mitigate the risk now suffered by residents.”

Ndamase said the order stemmed from a high court judgment handed down in June 2020 which declared the tender process to procure a fire fighting fleet, and the decision to award the tender, as unlawful and constitutionally invalid.

Gauteng municipalities need 205 fire trucks but only have 104, the Cogta minister told parliament in response to a question from the DA.
Politics
1 year ago

“The declaration of invalidity was suspended by the high court pending its determination of a just and equitable remedy under section 172(1)(b) of the constitution,” he said.

Ndamase said executive mayor Geoff Makhubo had once more lamented that “the judgment confirms that the previous administration under former mayor Herman Mashaba was a corrupt and ethically flawed administration whose actions sought to award tenders in the city without adherence to due process and legislation”.

“The City of Johannesburg under the former [dispensation] paid R172m for fire engines that were and still are, desperately needed by the city but that were never delivered and were procured on defective specifications.”

Ndamase said: “These illegal, irregular and unconstitutional procurement processes that characterised the DA/EFF reign of impunity in the city have led to the city accumulating a record R3.5bn in unauthorised, irregular, wasteful and fruitless expenditure in the 2018/19 and 2019/20 financial years.”

He said the current administration was pleased the courts had ordered that vehicles already paid for by the city must still be delivered while the remainder of the order was  terminated.

Mashaba has distanced himself from the illegal multimillion-rand fire engine contract, saying he wasn't aware that monies were paid in advance, adding that his administration was trying to solve a life-threatening problem.

Mashaba said while the contract was signed under his administration, he wasn’t involved in the procurement process.

With only four to seven fire trucks and 1,244 working ambulances for 5,5 million people, the city is ill-equipped
News
1 year ago

The court ordered that fire trucks paid for by the city be delivered within 60 days and that 15 grass fire units already paid for and delivered by the company be retained by the municipality.

The court further ordered that the company must register and deliver two level 2   accident vehicles, two heavy air trucks and one hazmat vehicle within 20 days of the court order.

Responding to a DA question in parliament, Dlamini-Zuma said Gauteng municipalities needed 205 fire trucks but only had 104.

Dlamini-Zuma said Sedibeng district did not have fire trucks at all, while only six of Johannesburg's 21 trucks were operational.

Johannesburg metro confirmed to Sunday Times Daily last month that it had between four and seven operational fire engines to service the city and due to ongoing litigation around the procurement of 28 fire trucks was unable to procure more.

The Competition Tribunal has found the firms guilty of fixing prices, dividing markets and tendering collusively in the market for supplying, ...
News
1 year ago

Gauteng premier David Makhura is deeply concerned about the financial state of the economic hub’s municipalities after being hit hard by the Covid-19 ...
News
1 year ago

ActionSA president Herman Mashaba wants the eThekwini municipality to be charged for the death of a Newlands mother, whose oxygen machine could not ...
News
1 year ago