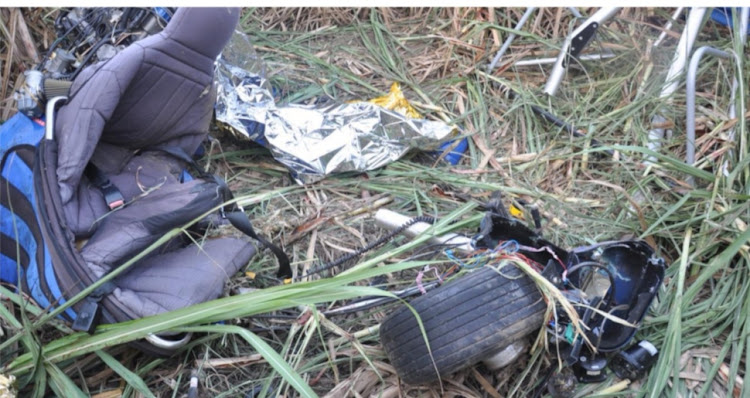 The microlight crash site at a sugar cane farm near the Ballito Airfield.
Image: Supplied

An experienced commercial pilot and his passenger died on impact shortly after they took off in a microlight in Ballito, north of Durban, last month, a preliminary accident report by the Civil Aviation Authority (CAA) has found.

According to the report, the duo took off from the Ballito Airfield to “perform an introductory flight operation” as Meiring was interested in microlight flying lessons.

The flight was scheduled to take about 30 minutes. When Slade and Meiring did not return after 40 minutes, the Approved Training Organisation (ATO) started a search.

The microlight was later found to have crashed about 165m north of the airfield on a nearby sugar cane farm.

“Medical officers reported that they found the pilot and the passenger seated in their respective seats with their seat belts on,” says the report.

Spinal fractures are most common injury in light-aircraft crashes

Fixed-wing aircraft account most of the accidents, followed by helicopters, study finds
News
1 year ago

The report states that despite them wearing seat harnesses, “the injuries sustained were not survivable due to the manner in which the microlight impacted the ground”.

“The microlight was destroyed by impact forces. The microlight impacted the ground shortly after take-off while engaged in an introductory flight, resulting in a crash which destroyed the microlight and fatally injuring both the pilot and student pilot.”

The report finds that there was sufficient fuel at the time of the accident and weather conditions were not a factor.

“The damage on the propeller blades indicated that the engine was producing power at the time of impact.”

The report also shows that Slade had a valid commercial pilot's licence, with nearly 22,000 hours of flying time, and that the microlight was issued with an authority to fly certificate which would have expired in January next year.

“The investigation is ongoing and the investigator/s will be looking into other aspects of this occurrence which may or may not have safety implications.”

The N2 highway on the KwaZulu-Natal south coast became a makeshift runway for a light aircraft pilot who made an emergency landing on the busy ...
News
1 year ago

According to a preliminary SA Civil Aviation Authority report, the collective lever - responsible for up and down movements of the helicopter - ...
News
1 year ago

A 52-year-old man has suffered critical injuries after his microlight crashed near Sunderland Ridge, Centurion, on Monday morning.
News
1 year ago