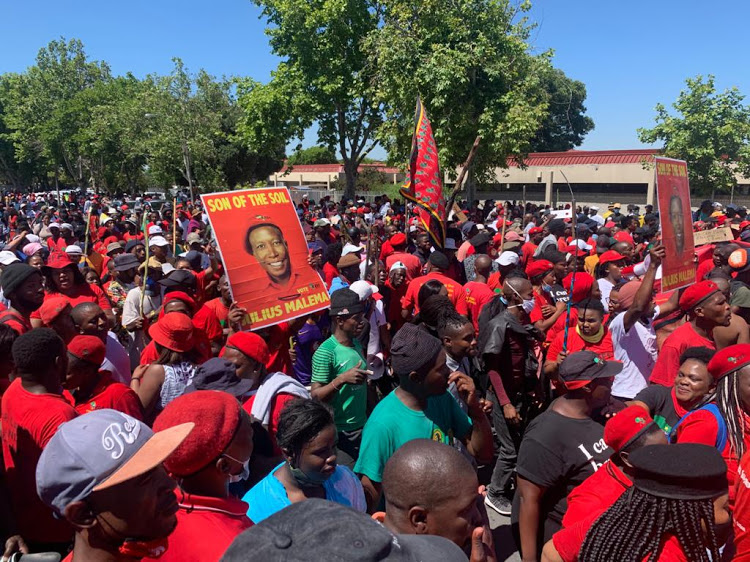 The City of Cape Town allege that EFF protesters damaged traffic lights and other public vehicles during a protest in Brackenfell in November last year. File photo.
Image: Esa Alexander

The City of Cape Town plans to try to claim damages from protesters who damaged city infrastructure during demonstrations.

This week, the City of Cape Town announced it is moving ahead with a R1.4m civil claim against the Gatvol Capetonian grouping and the EFF for the cost to repair damaged public infrastructure during protests.

The city said a summons for over R1.3m in damages related to a “shut down” of major routes in Cape Town in August 2019 was issued to Gatvol Capetonian in March.

In a statement, executive mayor Dan Plato said destroying infrastructure is not an acceptable form of protest, nor is shutting down major routes and disrupting the lives of law-abiding residents.

“In SA, we need to draw the line on the rule of law. That is why we are holding these groupings accountable for their actions to the tune of R1.4m,” Plato said.

The city’s civil claim states that it was “reckless, wrongful and unlawful” of this organisation to incite a “shut down” while violating their Gatherings Act obligations to give notice, appoint conveners and marshals, and refrain from violence.

The city said its legal representatives have further issued a letter of demand to the EFF for damage to infrastructure in Brackenfell in November last year, for violation of agreed gathering conditions with the SA Police Service (SAPS) and Western Cape High Court.

The city is accusing EFF members of damaging traffic lights at several intersections, setting fire to a vacant field, and damaging public vehicles including a fire engine.

It is claiming R87,312.25 from the EFF to cover the costs of infrastructure repair and said the party has 21 days to make payment into the city’s bank account or face a summons, which will also include a claim for legal costs to recover the funds, plus interest.

Plato said it is disappointing when political organisations cause harm to community infrastructure and damage critical assets that are installed to uplift communities.

“The city is committed to providing resources to all communities but this becomes difficult when there are individuals working against social cohesion as seen through their acts of destruction, as with the EFF and Gatvol Capetonian. The communities of Grassy Park, Atlantis, Mitchells Plain and elsewhere deserve better. The city respects the rule of law and the right of citizens to assemble, provided this is done peacefully and with respect to the rights of others,” the mayor said.

The same issues, the same protests, nothing resolved

After more than two weeks of university students protesting against fees and for historical debt to be scrapped, nothing appears to have been ...
Opinion & Analysis
1 year ago

This is not the first time that the City of Cape Town has claimed for damages from protesters. In 2012, the Constitutional Court upheld a judgment that held the SA Transport and Allied Workers' Union (Satawu) liable for R1.5m damages caused during a march in Cape Town in May 2006.

Heese said legally the precedent is clear and in the city’s favour.

Meanwhile, the Labour Appeal Court (LAC) has ruled that employees can be dismissed for carrying weapons during a strike.

Webber Wentzel said in a statement the ruling also found that employers can reasonably expect employees to know that having dangerous weapons at work (or during a strike) is unacceptable and a dismissible offence.

The dismissed employees were Numsa members employed by Pailpac, who participated in a protected strike, during which they carried weapons, including sticks, PVC rods, sjamboks and golf clubs.

“The practical relevance of this judgment is the test to be applied when employees claim that they were not aware of workplace rules. The correct test is not only whether the employees were aware of the rule, but also whether they could reasonably be expected to be aware of it,” said the law firm.

“It is also relevant that the LAC confirmed that sticks, pipes, sjamboks and golf clubs are 'dangerous weapons', a term which is usually found in picketing rules.”

Law does not allow firing of worker who flouts Covid-19 regulations: department

The department of employment and labour has disputed a labour expert's view.
News
1 year ago

A group of EFF students blockaded an entrance of the Mangosuthu University of Technology in Umlazi, south of Durban, with burning tyres and other ...
News
1 year ago

The Pretoria high court has ordered the artists, creatives, heritage sector workers and cultural workers who have camped outside the National Arts ...
News
1 year ago