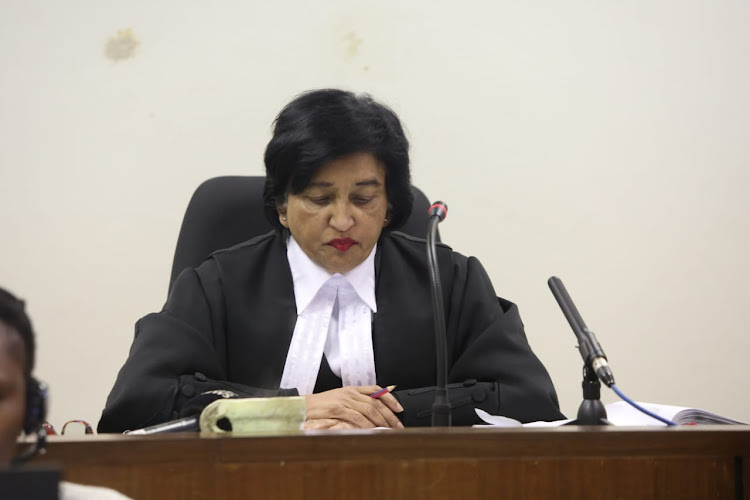 Judge Dhaya Pillay says she has known Pravin Gordhan for a long time. 'We are both activists from Durban and it’s hard not to know him.'
Image: Sandile Ndlovu

KwaZulu-Natal judge Dhaya Pillay found herself defending her private financial investments, her “friendship” with Pravin Gordhan and a lunch she had with Jacob Zuma at his homestead in Nkandla during her interview with the Judicial Services Commission on Tuesday.

The veteran judge — who has served on the labour court and has acted in the Supreme Court of Appeal and, most recently, in the Constitutional Court — is vying for one of two positions on the apex court.

But while she started off impressively — revealing how she helped with drafting the constitution, the country’s post-democracy labour laws and sits on the Electoral Commission of SA (IEC) — she found herself being questioned about her personal financial affairs and the fact that she is a director of two “investment” vehicles, which she declared on the judges' assets register.

And then she was faced with questions about her presiding over the matter in which Derek Hanekom successfully sued former president Jacob Zuma for defamation and when she presided over Zuma’s criminal case in Pietermaritzburg when she issued a stayed warrant for his arrest for his non-appearance.

She sought to explain: she said as the senior judge on duty on those days both Zuma matters had been foisted on her.

“With the Hanekom matter, there was no conflict of interest but I had recently been hosted (as a member of the IEC) at his home for lunch. It seemed discourteous. But it was a common law dispute of defamation. It was all in the pleadings and I had to apply the law.”

“I was told it would probably be adjourned. But then he was not in attendance. The normal thing a judge does is to issue a warrant and stay it, which is what I did,” she said, explaining that the medical certificate handed in had been altered.

Asked if she was friends with Hanekom and Gordhan, as alleged by  members of the public in opposition to her appointment, she said: “I saw Hanekom in my courtroom. I am not friends with him. Mr Gordhan I have known for a long time. We are both activists from Durban and it’s hard not to know him.”

She referred to postings on social media as “dangerous noise” and said if there were allegations, they needed to be properly tested.

“There are trouble makers, detractors to our democracy,” she said.

But EFF leader Julius Malema was having none of it.

With regards to her investments, he said the banks had become “too powerful” and in litigation, often won their cases against poor people.

“If judges have shares in banks, how does that enhance the good image of the judiciary?”

She countered: “The fact that I have shares in banks does not even cross my mind. The legal practitioners will tell you how I lambaste the banks. Standard Bank comes to the High Court with claims for R10,000 repeatedly. It doesn’t cut it in my court. The banks really don’t think I am their friend.”

Malema then asked if there was a picture of her with Hanekom and Gordhan — “who has captured the judiciary” — circulating on social media.

She said there could not be one of Hanekom, but it was possible there was one of her and Gordhan because “we are friends”.

She said: “My association with him has never affected on my work and will not, going forward. I have made judgments against the Treasury and against Sars and it has never been a problem.”

Malema said: “I am going to argue in the closed session that you are nothing but a political activist and you don’t deserve any high office. You are factional and you are part of the Gordhan faction.”

She said a crisis occurs where public office bearers pronounce that they are not bound by the constitution and refuse to obey court orders.

“Thankfully, our judiciary and the IEC are bulwarks. We are no way near to constitutional rot, that is where institutions are dysfunctional and there is no public trust.

“But it shows how important the judiciary is.”

Franny Rabkin looks at the candidates who will be interviewed for appointment to  the benches of the  country’s highest court.
Opinion & Analysis
1 year ago

The office of the chief justice has “noted with concern” the “attack” on Judge Dhaya Pillay after she issued a warrant of arrest for former president ...
News
2 years ago

The Supreme Court of Appeal (SCA) has dismissed a bid by former president Jacob Zuma to appeal against a court ruling that found he had defamed ...
News
2 years ago

An oral hearing will determine how much former president Jacob Zuma will pay in damages to former minister Derek Hanekom for calling him a “known ...
News
2 years ago

JSC announces shortlist of judge candidates to be interviewed in April

The Judicial Service Commission has announced a shortlist of six candidates for a vacancy at the Constitutional Court.
News
1 year ago