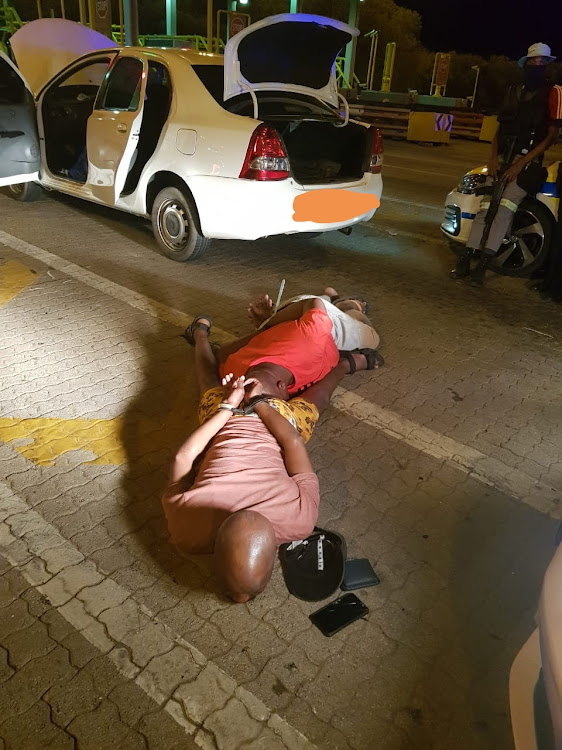 The two suspects accused of shooting a taxi driver and assaulting passengers in Limpopo appeared in court on Monday. They were arrested at a toll gate, heading in the direction of Gauteng shortly after committing the alleged crime.
Image: Supplied

Two suspects arrested in connection with taxi-related violence in Limpopo at the weekend appeared at the Mokopane magistrate’s court on Monday.

According to police spokesperson Col Moatshe Ngoepe, the two men, Piet Maphoto, 32, and Peter Mokgokong, 47, are accused of shooting a taxi driver and assaulting passengers with a rifle near the Seshigo High School in Leokama village in the Moletjie area, outside Polokwane.

The suspects were arrested at a toll gate, heading in the direction of Gauteng shortly after committing the alleged crime. They were arrested during a tactical joint operation conducted by the SAPS Limpopo highway patrol team and the provincial tracking team in the Capricorn district.

“The suspects were allegedly driving a Toyota Etios vehicle with Gauteng registration numbers. In the process, the driver and the passengers sustained serious injuries. The matter was reported to the police who reacted swiftly and followed this vehicle which was reported to be travelling along the N1 North road, heading towards Gauteng.”

Ngoepe said the vehicle was cornered and stopped after being spotted at the Nyl toll gate plaza. He added it was discovered that the chassis number of the vehicle was tampered with and also established that the vehicle was used to commit several violent crimes in the Matlala, Seshego, Mankweng and Polokwane policing precincts.

The two suspects were remanded in custody until April 28 for bail application and further police investigations.

In a separate incident, a security guard appeared at the Phalala magistrate’s court on Monday for the alleged murder of his colleague. The guard, Meluzu Andison Khumalo, 39, is accused of shooting Matshembe Mphambanyene, 40, who had reported for night duty with him last month. The deceased was found dead in the guardroom by other colleagues reporting for duty the following day. His service pistol was also missing and his colleague who reported for duty with him the previous night was nowhere to be found.

“The suspect allegedly shot and killed a security guard in the guardroom at the weighbridge which is situated along the N11 road next to Groblersbrug border post. The deceased’s body was found the following morning with a bullet wound,” Ngoepe said.

He was remanded in custody until June 1 for further police investigations.

Western Cape police are investigating the shooting of a police officer whose body was found with several gunshot wounds on Sunday morning in Disa ...
News
1 year ago

A shooting at a doctor’s rooms in Mabopane, Pretoria, left a receptionist dead and a doctor and another employee critically injured Netcare 911 said.
News
1 year ago