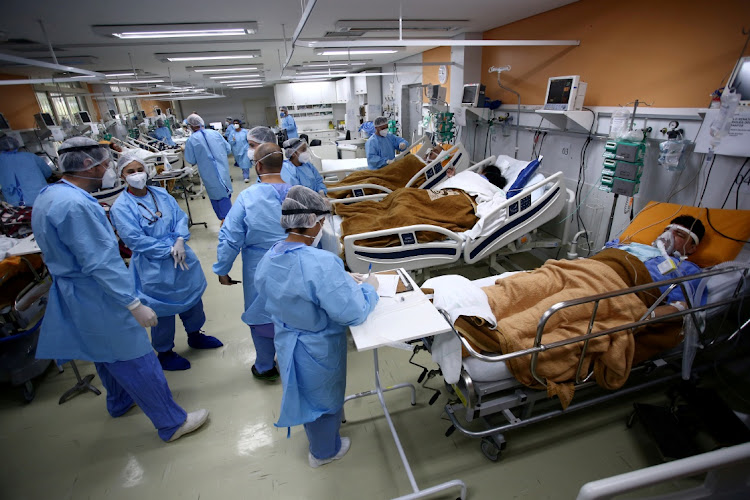 Medical workers take care of patients in the emergency room of the Nossa Senhora da Conceicao hospital that is overcrowding because of the coronavirus outbreak, in Porto Alegre, Brazil, March 11, 2021.
Image:  REUTERS/Diego Vara/File Photo

There have been 1,561,559 total confirmed cases recorded across SA to date, Mkhize said.

Of the newly recorded fatalities, 26 were in Gauteng, 24 were in KwaZulu-Natal, 14 were in the Eastern Cape, nine were in the Free State, and two were in the Western Cape. There were no deaths recorded in Limpopo, Mpumalanga, the North West or the Northern Cape in the past 24 hours.

The Disaster Management Act has been extended for another month, and will now expire on May 15 .

The extension of the act — the umbrella legislation under which the country's Covid-19 related laws are promulgated — was signed into effect and gazetted by co-operative governance and traditional affairs (Cogta) minister Nkosazana Dlamini-Zuma on Tuesday, and published on Wednesday. It was due to expire on April 15.

The notice of the extension states that it was being done “taking into account the need to continue augmenting the existing legislation and contingency arrangements undertaken by organs of state to address the impact of the [Covid-19] disaster”.

'We are not sleeping on the job': Zweli Mkhize reveals tough Covid-19 vaccine negotiations

Health minister Zweli Mkhize has laid bare the extent of challenges faced by the South African government during negotiations to procure Covid-19 vaccines.

“I can assure you that we have not been sleeping on the job. That we previously did not disclose to parliament the blow-by-blow details of intense negotiations was also because we were prioritising closing these agreements to secure the vaccines we require to reach population immunity,” said Mkhize.

Mkhize conceded this on Wednesday during a portfolio committee on health sitting, where he updated the nation on the Johnson & Johnson (J&J) clinical trials and answered questions about the vaccines, procurement and progress on the rollout programme.

'We are not sleeping on the job': Zweli Mkhize reveals tough Covid-19...

The national coronavirus command council (NCCC) has approved the recommendation to establish the no-fault compensation (NFC) fund to protect the rights of citizens who will be vaccinated.

Health minister Zweli Mkhize on Wednesday announced in parliament that retired chief justice Sandile Ngcobo has been appointed to head the scheme which has to be established as a precondition made by Johnson & Johnson (J&J). It is understood vaccine manufacturer Pfizer has made a similar request to the government.

President Vladimir Putin has received the second shot of a Russian COVID-19 vaccine, the Interfax news agency cited him as saying on Wednesday.

The Kremlin said last month that Putin had received the first shot without disclosing details or providing photographs. It has not said which of Russia's three vaccines, the most well-known of which is Sputnik V, he has received.

A multivalent Covid-19 jab developed by US vaccine manufacturer Moderna has shown promising results against the so-called “SA variant” of the coronavirus, the company said on Tuesday.

The vaccine, which combines Moderna’s original Covid-19 vaccine with a new booster vaccine designed to work against new variants of the virus, increased neutralising antibody titres in mice against the new variants.

The temporary suspension of the Johnson & Johnson (J&J) vaccine rollout in SA is a precautionary measure until the causal relationship between the development of clots and the J&J Covid-19 vaccine is sufficiently interrogated.

This is according to health minister Zweli Mkhize, who provided an update on Tuesday night about the country’s response to blood clot concerns.

Mkhize said SA takes the concerns seriously and stakeholders were consulted before the decision to halt the rollout of vaccines was taken.

J&J vaccinations and blood clots - what you need to know

The Johnson & Johnson (J&J) vaccine rollout has been “provisionally” suspended in SA following an investigation of a possible link between the vaccine and a rare type of blood clot in the brain.

Health minister Zweli Mkhize made the announcement on Tuesday, saying the suspension might only be for a few days.

J&J vaccinations and blood clots - what you need to know

The Democratic Republic of Congo will start its COVID-19 vaccination campaign on April 19 with 1.7 million AstraZeneca doses it received from the COVAX global vaccines sharing scheme after delaying the rollout for more than a month.

Congo received the vaccines on March 2 and was expected to begin the inoculation campaign almost immediately but delayed rollout after several European countries suspended use of the shots.

A government statement late on Tuesday said a task force had determined that the AstraZeneca vaccines already available in the country presented no risks to the population.

Congo has reported 28,542 infections and 745 coronavirus-related deaths since the pandemic began.

Australia's national cabinet will begin meeting twice a week from Monday to help mobilise the country's battle against Covid-19 as authorities consider mass vaccinations to ramp up its coronavirus inoculation efforts.

The federal government and states will discuss setting up mass vaccination centres from as early as June for people above 50, Prime Minister Scott Morrison said on Wednesday, when the country would have moved to its next immunisation phase.

"We will have AstraZeneca vaccines that we believe we might be able to ramp up the pace of vaccination for those aged between 50 and 70. That's millions of Australians," Morrison told reporters in Perth.

Australia earlier this week abandoned a target to provide at least one vaccine dose to the near 26 million population by year-end after restricting the rollout of its favoured AstraZeneca vaccine to people under 50 over clotting concerns.

Findings by Europe's drug regulator of rare cases of blood clots among some adult recipients of the AstraZeneca vaccine were a major blow for Australia as the country had based its immunisation drive largely on that inoculation, with plans to manufacture 50 million doses locally.

Australian officials overhauled the programme in response, doubling an earlier Pfizer order to 40 million shots, which would be delivered by the end of the year, mostly for its adult population under 50.

US federal health agencies on Tuesday recommended pausing use of Johnson & Johnson's Covid-19 vaccine for at least a few days after six women under age 50 developed rare blood clots after receiving the shot, dealing a fresh setback to efforts to tackle the pandemic.

India's new coronavirus infections reached a record of 184,372 in the last 24 hours, health ministry data showed on Wednesday, as most of the south Asian nation battles a second surge in cases.

They say procurement must be left to the state, adding that bankrolling jabs for those without medical aid is illegal