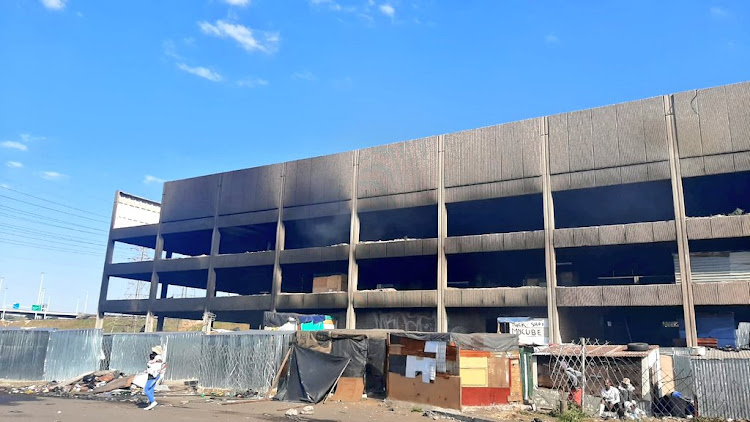 The building, which has been filled with around 100 shacks, caught fire in the early hours of Wednesday morning.
Image: Johannesburg metro police department

Nine people, including an infant, burnt to death when a fire broke out in an abandoned building in the Johannesburg CBD.

The building, which has been filled with around 100 shacks, caught fire in the early hours of Wednesday morning.

Johannesburg emergency services spokesperson Nana Radebe said they were alerted to the blaze at 4am.

Radebe said the shacks were situated on the top floor of the building.

“The fire started at the ground level. We are investigating to determine what caused the fire.”

About 20 people were rushed to hospital after suffering burn wounds while others broke their legs when jumping from the building, Radebe said.

Firefighters are still on scene of a fire that destroyed multiple shacks inside a 5-story Kaserne parking garage near Kwa Mai Mai. Sadly 9 people, including an infant, died in the blaze that started this morning. 20 patients were treated on scene & rushed to hospital for burns pic.twitter.com/Vvij1hUM2k

The fire has since been extinguished.

When Ayabonga Herman from Booysens informal settlement in Johannesburg left his workplace on Friday, he did not expect to arrive home to his shack ...
News
4 months ago

A hijacked property was handed over to its owner in Doornfontein, eastern Johannesburg, on Thursday and 40 suspects who were found at the property ...
News
4 months ago

An estimated 1,000 shacks were destroyed after a fire ripped through Masiphumelele in Cape Town on Thursday.
News
5 months ago