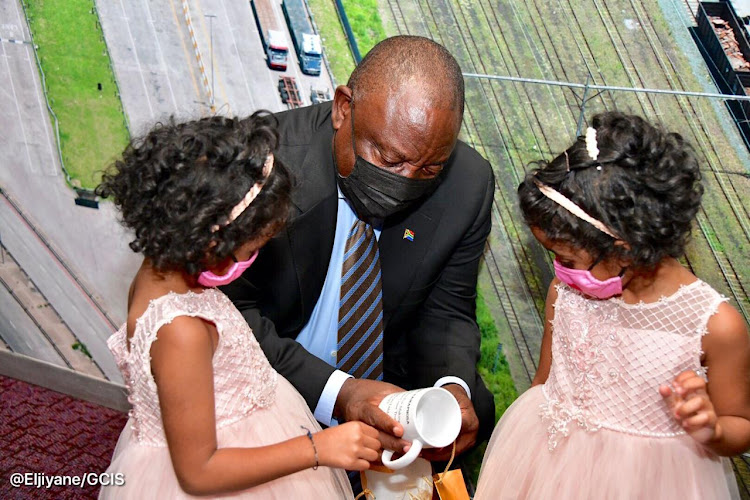 That's how four-year-old Mehran Dildar — who regards herself as President Cyril Ramaphosa's “biggest fan” — greeted him when they met for the first time in Durban on Thursday.

Ramaphosa was on an oversight visit of the port when he had an audience with the little girl at the Transnet offices, who has aspirations of being president herself one day.

Her mother Fatima Dildar told TimesLIVE on Friday that Mehran, from Lotus Park, south of Durban, was still reeling from her meeting with Ramaphosa.

“She woke up this morning and said, 'Mummy, I met the president!'”

Mehran is so intrigued by Ramaphosa that she has pictures of him pasted on her wardrobe, had a birthday cake with his face emblazoned on it and cried when his “family meeting” address was delayed.

Her videos and her desire to meet the president caught the attention of both Ramaphosa and his team after Dildar started tagging the presidency's social media accounts.

“On March 26 I received a call from the president’s office telling me that he wants Mehran to know that he is watching her videos and would also like to meet her. I first thought it was a hoax and researched names and credentials.

“The president’s team confirmed that it was Mehran he referred to in his address on December 3 2020 where he said: 'I was recently most impressed when a 4-year-old little girl was repeating exactly the same message telling adults what the president has been saying'.”

Ramaphosa's security team met with Fatima and her husband Eidris on Tuesday to brief them about the meeting.

The couple have five children, including a son and two sets of twins, among them Mehran.

This was very new to us as we are not political at home — there’s more cartoons on TV than news.

“This process was very strict and confidential. On Thursday they fetched us and only disclosed the location en route. We met him at a programme during his visit to the Durban port.

“We did not tell our children of the meeting because of the strict security involved. We did not want to be in breach of security and jeopardise anything. We told the children that we are going for our first radio interview and the president will do a video call.

“His security team, however, came twice to meet Mehran at home so she could get acquainted with them.”

Mehran was shocked and excited when she finally met Ramaphosa.

“When she walked in and saw him she screamed, 'My president!'”

And she later exclaimed: “This was the best day of my life!”

“The president was so calm and patient with her. He asked her for her name and age and why she was there,” said Dildar.

Mehran told Ramaphosa she wanted to be a leader like him but a “girl president”.

“He thanked her, encouraged her and wished her well.”

Dildar said Mehran's interest in Ramaphosa began at the start of lockdown last year, when he started addressing the nation about the Covid-19 pandemic.

“I encouraged the videos as a means to aid her speech impediment and speech therapists recommended that doing these may help her stutter.

“However, I soon realised that she was actually listening intently to the president and almost understood parts of what he was saying. She said she was doing her videos to make the children understand what the president was saying.”

The first video went viral in April last year. At the time, she was doing videos on Covid-19, lockdown and what freedom meant to her.

“Mehran then got very intrigued by the president and started cutting out his pictures from the papers and sticking it on her wardrobes, wanted him on her birthday cake and would get angry when his speeches were delayed,” said Dildar.

She then told her mother she wanted to be a girl president. “This was very new to us as we are not political at home and with five kids — she is a twin, has a set of bigger twin sisters and a brother — there’s more cartoons on than news.

“Her birthday wish was to meet the president and I even have videos of her crying because he was taking so long to meet her. I then decided to tag the presidency on her videos.

“I still never thought that this day would happen.”

This year's local government elections should go ahead as planned, President Cyril Ramaphosa said on Thursday.
Politics
3 months ago