Two firefighters have been hospitalised for burns after a runaway blaze which engulfed the Rhodes Memorial restaurant and parts of the University of Cape Town, including the Special Collections library on Sunday.

In a statement, Table Mountain National Park (TMNP) said initial investigations show that a fire suspected to have been left unattended by a vagrant is believed to have been the cause of the runaway blaze which has seen hundreds of students evacuated from the University of Cape Town residences in Rosebank. 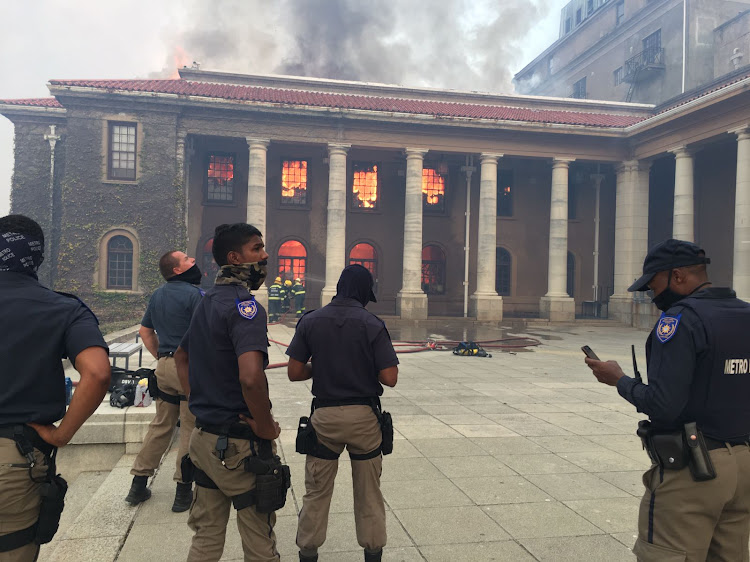 A library at the University of Cape Town believed to contain its priceless African Studies collection was gutted by the fire.
Image: Supplied

JP Smith on the latest on the fire: No danger to properties currently but UCT is still dangerous. @TimesLIVE #capetownfire pic.twitter.com/wzNMyiFnQI

“The critical thing is that there haven’t been any reports of loss of life which points to the sterling work that our emergency services are doing. They have been working around the clock to evacuate people and put out the fire.

“Tragically we have lost the Mostert Mill, which was built in 1796 and was the oldest surviving working windmill in SA as well as four thatched roof houses behind it. It is irreplaceable. I understand that there is another building that has gutted on the UCT campus and now we have heard about the library. These are all tragic heritage losses.”

According to the UCT website, the Special Collections library consists of printed and audiovisual materials on African studies and a wide array of other specialised subjects, as well as over 1,300 sub-collections of unique manuscripts and personal papers. The collection of books and pamphlets exceeds 85,000 items on African studies alone. It is understood that some material has been captured digitally.

There are several firefighting teams which have been working around the clock, including helicopters that are water-bombing blazes around UCT.

Cape Town's disaster risk spokesperson, Charlotte Powell, said the city had not called on any residents to evacuate.

“The situation is being monitored and staff will go door-to-door in the event that evacuation is required. For now, residents are advised to keep doors and windows closed to manage the impact of smoke caused by the fire.

“The city can confirm that property has been affected; however, our focus at the moment is on active firefighting efforts and updates on affected properties will be provided when the information is available.”

Firefighters have been working since Sunday morning to extinguish the runaway fire that has engulfed Rhodes Memorial and is spreading towards the ...
News
9 months ago

She said donations of water, energy drinks, energy bars and eye drops could be dropped off at the Roeland Street fire station.

Paddy Chapple, councillor of ward 57 which covers large parts of Rosebank and Mowbray, said that residents were advised to damp down roofs and garden.

He said UCT residents had been evacuated as a precautionary measured and were scheduled to be relocated at Rondebosch Commons.

“Reports that the UCT sports centre had been burnt down is fake news, however we can confirm that the Windmill and four thatched houses have been destroyed.”

Chapple said there were several reports of palm tree fires and hot ash that was swirling around in the wind.

The University of Cape Town (UCT) said all students on its main campus were being evacuated by emergency services support staff on Sunday as a ...
News
9 months ago

A section of Rhodes Memorial restaurant was gutted in a mountain fire which was spreading towards the University of Cape Town on Sunday.
News
9 months ago